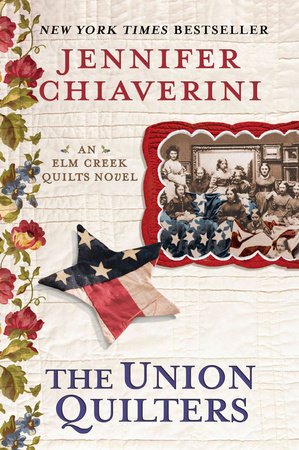 INTRODUCTION
“Chiaverini has once again written an intense and beautiful book-so much so that readers will almost hear the hollow echo of the fife and drum as they immerse themselves in every compelling page. . . . Truly unforgettable.”
–BookPage

In 1862, the men of Water’s Ford, Pennsylvania, rally to President Lincoln’s call while Dorothea Granger marshals her friends to “wield their needles for the Union.” Meanwhile, Anneke Bergstrom hides the shame she feels for her husband’s pacifism; gifted writer Gerda Bergstrom takes on local Southern sympathizers in the pages of the Water’s Ford Register; and Constance Wright struggles to help her husband gain entry to the Union Army-despite the color of his skin. As the women work, hope, and pray, the men they love confront loneliness, boredom, and danger on the battlefield. But the women of the sewing circle also forge a new independence that will forever alter the patchwork of life in the Elm Creek Valley.

Q. The Union Quilters is a historical novel in a series that includes both contemporary and historical books. Alternating between past and present must offer unique creative opportunities. Could you describe your methodology for selecting the eras and settings you write about? Did you plan to take this approach from the beginning of the series?

I enjoy writing both contemporary and historical novels, and I’m pleased that my readers have been willing to let me stretch the definition of series so that I can continue to write in both genres. When I wrote my first novel, The Quilter’s Apprentice, I had no idea it would be the first of many intertwined books, so I didn’t map out an extended storyline that would be spread out over a certain number of volumes. In hindsight, I think it’s fortunate that I launched the Elm Creek Quilts series this way. Instead of proceeding in a strict linear fashion, following the same thread of the same character’s life in perfect chronological order, I’ve been able to take secondary characters from earlier stories and make them the protagonists of new books. In other novels, I’ve delved into a familiar character’s past, exploring entirely new settings and characters that are still tied in some way to the Elm Creek Valley. Because I’ve been flexible with the traditional series format, I’ve enjoyed the creative freedom to write novels that explore new characters, settings, and historical eras while still satisfying readers who want to see the people and places they have already come to know and love.

Q. The Lost Quilter was set in antebellum and wartime South Carolina, now The Union Quilters is set in the North during the same era. What do you find most fascinating about this time in history?

The Civil War era was a tumultuous and transformative period for our nation, showing the best and worst of humanity in stark contrast. Looking back, we discover great moral failings alongside true heroism in the struggle for justice, equality, and freedom. My personal heroes are people who face adversity with moral courage and dignity, whose hunger for justice and compassion for others lead them to stand up for what is right even at great risk to themselves. My favorite characters to write about either possess similar qualities, or are given the opportunity to summon up these qualities and do what is right but fall short. What slavery and the Underground Railroad say about our country-that we are capable of both great moral failings and tremendous goodness-resonates strongly even today, perhaps especially today, and as a creative person, I am drawn to explore and try to understand that conflict.

Q. The women of The Union Quilters played a critical role in the war, providing funds and supplies for the soldiers and running the town farms and businesses in their absence. Were you inspired by any real-life events or stories of women’s groups in the Civil War?

In The Union Quilters, as in history, Union and Confederate women alike made quilts for soldiers to use in camps and in hospitals. They sewed and raffled off quilts to raise funds to support important causes, and they quilted to express themselves artistically during a time of national strife and personal turmoil. On the northern home front, the demands of war thrust women into new roles, for they suddenly needed to support and provide for the men who had always been cast in the role of their protectors. This was an unsettling transition, and yet, for many women it offered an exhilarating sense of independence. The women’s advocacy for their husbands, sons, and brothers empowered them. The volunteer organizations they created to provide food, clothing, medicine, and other essential goods for the soldiers allowed them to step beyond the private, domestic sphere and participate in a new, public realm outside of the traditional political structure from which they were excluded. Accounts of women’s volunteer organizations, especially the Ladies’ Aid Association of Weldon (PA), inspired the activities of the Union Quilters in the novel. Like their fictional counterparts, the Ladies’ Aid Association of Weldon constructed a hall to host fundraisers, incorporated, and maintained ownership of a very important cultural center and civic resource despite strong male opposition. This provided the women with significant influence and power in their town, leverage they had not previously possessed.

My next novel, The Giving Quilt (Dutton, October 2012), returns to contemporary times as the Elm Creek Quilters host a special week of winter quilt camp to create quilts for Project Linus, a national organization whose mission is to provide love, a sense of security, warmth, and comfort to children in need through the gifts of new, handmade blankets, quilts, and afghans. Sylvia, Sarah, and the gang will welcome four new characters-and one reader favorite who first appeared in my ninth novel, Circle of Quilters-to Elm Creek Manor, where they become confidantes and discover the many rewards, meanings, and purposes of giving. I love the world of the Elm Creek Quilters as much as my loyal readers do, and I plan to continue the series as long as long as each book is a unique, interesting, captivating story in its own right-and as long as my readers keep telling me that they yearn to revisit the Elm Creek Valley, past and present.

Savannah: Or a Gift for Mr. Lincoln
John Jakes

Delayed Rays of a Star
Amanda Lee Koe
Back to Top