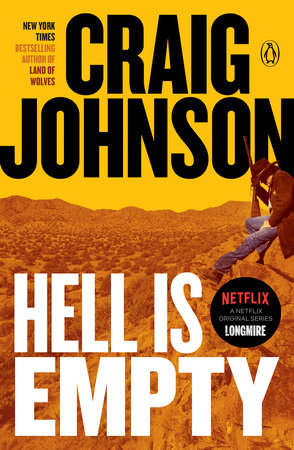 In his thirty-year reign as sheriff of Wyoming’s Absaroka County, Walt Longmire has dealt with some tough customers, but none more lethal or more terrifying than sociopathic murderer Raynaud Shade. He has also traversed some rough terrain, but none as challenging as the Cloud Peak Wilderness in the Bighorn mountains during a raging blizzard. Put these two together—a merciless killer and an equally merciless landscape—and you have the makings of a white-knuckle thriller, one that will push Walt Longmire to the edge, literally and figuratively, of what he can endure.

After Walt delivers Shade—an adopted Crow Indian who has just confessed to the murder of a boy ten years before—and two other murderers to the FBI, Shade overpowers his captors, kills four of them, sets a gas station on fire, and takes two hostages deep into the Bighorn Mountains. Without backup, and in the face of a gathering storm, Walt decides to pursue the killer and the hostages into the treacherous high country by himself. It’s a crucial decision and reveals an essential aspect of Walt’s character—the extraordinary willingness to risk his life to help others.

The hellishness of Walt’s expedition echoes the tale of Dante’s Inferno, which Deputy Saizarbitoria is reading and that Walt carries with him up the mountain. Walt is guided by Virgil White Buffalo, just as Dante was guided by the Roman poet Virgil. Virgil materializes suddenly, miraculously, wearing the head and coat of a grizzly bear, and lifts Walt from under an overturned snowmobile. He helps Walt survive on the mountain and leads him to his final, dramatic encounter with Shade. Johnson leaves open to question whether Virgil actually appears, if Walt is hallucinating his presence, or if it is Virgil’s spirit guiding him. Readers are invited to decide for themselves the relative truth of the Native American mysticism that pervades the Walt Longmire novels.

What’s never in doubt is Walt Longmire’s tenacity, keen awareness and quick thinking, lively sense of humor, and steadfast adherence to a set of values that sustains him in the face of even the gravest peril. Walt understands how even the most deranged and violent of people think and feel and act. To watch him in action—and to listen to him narrate his own story—is one of the many pleasures of the Walt Longmire mysteries.

Craig Johnson is the author of the Walt Longmire mystery series, which includes The Cold Dish, Death Without Company, Kindness Goes Unpunished, Another Man’s Moccasins, The Dark Horse, and Junkyard Dogs, all available from Penguin. He is the recipient of the Western Writers of America Spur Award for fiction, the Mountains and Plains Booksellers Award for Fiction, and the Nouvel Observateur Prix du Roman Noir. He lives with his wife, Judy, in Ucross, Wyoming.

Q. Why did you decide to make Dante’s Inferno such an integral part of Hell Is Empty?

There are certain seminal pieces of literature that haunt you, and Inferno is one of mine. Evidently it preoccupies others as well, since it is listed as one of the top ten Penguin Classics. It’s interesting to me that it is Dante’s view of hell that most people carry. There is very little description of Hell in the Bible and what there is conjures up a place of fire and brimstone. In Dante’s poem, the deepest of Hell’s rings aren’t lakes of fire but rather frozen, icy, wind-blown places, not unlike the top of Cloud Peak. I knew I wanted there to be a literary metaphor for the novel, and Dante’s opus seemed the obvious choice. I’d already introduced my guide, Virgil, a few books back, and Walt became my everyman—my Dante.

Q. Walt is pitted against the elements as much as he is against Raynaud Shade. Why is the setting so crucial in this novel?

The mountains are a place of extremes, and this is a novel about extremes. Place has always been an important character in my novels, and Cloud Peak is an amazing environment, that is located near my ranch; I don’t see how folks can live in the shadow of a mountain and not want to climb it. It was also a logical choice in that if you were attempting a manhunt, there are not many places more difficult than an 189,039 acre wilderness area. I’ve always been a big fan of Geoffrey Household’sRogue Male, and this was an opportunity to do my take on that type of literature.

Q. As in many of your novels, mysticism plays an important role in Hell Is Empty. What interests you about Native American myths?

The lineage of my people in this country is only a couple of hundred years old, but the people up on the Rez have been here for thousands of years and, in my book, that means that they might know a few more things about the area than I do. I never discount anybody’s beliefs and that might be something Walt and I have in common. In all honesty, I’ve been in more sweat lodges than churches in the last twenty years. As far as the spiritualism is concerned, the trick in this particular novel was to not repeat what I’d done in The Cold Dish; I thought that Walt’s disbelief in what had happened then was intrinsic to what would happen this time around. If Walt didn’t believe in the things that happened to him previously, then how would those same entities attempt to assist him this time? That gave me the tangible reason in the plot for the reintroduction of Virgil. Besides, they are stories, and stories always interest me and I hope my audience.

Q. The fire that Shade sets on Cloud Peak is intensified by the beetle kill that has ravaged parts of Wyoming, and the couple that Walt meets coming down the mountain in their hyper-modified jeep suggest major changes in both the social and physical environment in the Wyoming high country. Could you talk about those changes?

Most of the time I take the ideas for my novels from local newspapers, which keeps the books grounded in the reality of place. There are remarkable changes going on in the American West and to leave those out of the books would be dishonest. Both of the instances you mention, however, are mirror images of Inferno with the Jeep driver playing the role of Charon, the boat driver who takes Walt across the river Styx and the beetle kill forest representing the dead forest of suicide, so maybe things don’t change but stay the same.

Q. Walt Longmire’s wit is one of his most appealing characteristics. How do you think about the role of humor in your work? How much did you enjoy writing the sentence: “Jesus, Virgil, Dante saved your life”?

Okay, guilty on that one… I think that humor is one of the finest weapons we have in tough situations, and one of the things that keeps us human. Walt needs all the humanity he can gather in this one, and so the humor becomes paramount the more serious things get. In all honesty, Hector, the gangbanger from Houston, died in the first draft of the book, but when my wife read it she said, “You can’t kill this guy, he’s too funny.” Being funny can save your life, even in a fictional sense.

Q. This is your seventh Walt Longmire mystery. Are you still discovering new aspects of his character?

Absolutely; if I weren’t I wouldn’t be writing the novels. Walt has changed since the first book in the series and continues to change. I think the complexity of character is the life-blood of any series.

Q. You live in Ucross, Wyoming. Could you talk about the writing community there and in Wyoming generally? Do you share your work with other writers in the area?

Ucross has a population of twenty-five, so there really aren’t any other writers around, and Wyoming itself is the least populated of the fifty states but ranks ninth in area, so we are too spread out to discuss much, which is fine with me. I’m not a big one for sharing my work in progress. I have very defined ideas about what I’m doing and how I do it, and I don’t think I’d really gain anything from discussing my work; I’m a big one for saving it for the page, which drives my wife nuts; there are times she won’t feed me unless I tell her who did it.

I read a lot of everything—fiction, nonfiction, memoir, biography—but a lot of the time it’s connected to the work in one way or another. I think that one of the biggest mistakes you can make is to read only within one genre because generally you end up regurgitating the same stuff. Generally, I do all my research reading a year in advance of writing the actual book so that by the time I get to write the novel, I’m chomping at the bit to get going.

Q. Could you talk about your writing process? How do you generally begin your novels? Do you see pretty far ahead in terms of plot, or do you let the story carry you along? How much did you revise Hell Is Empty?

I outline the living daylights out of my books, not only the arc of a singular book but the arc of the series. To write this book, as I mentioned before, I had to have a Virgil so I’m generally thinking a couple of books ahead. I also allow for a certain amount of improvisation in the writing, which I think is important; if I can surprise myself then maybe I can surprise the readers. This novel was particularly difficult since the framework was Dante’s and not mine, but I still wanted it to be satisfying for people who hadn’t read Inferno. I try to write on as many levels as possible and then hope for the best. And yes, I revised and then revised some more. My books are really never finished—Viking/Penguin just takes them away from me.

The Lost Ones
Ace Atkins

Robert B. Parker’s Damned If You Do
Michael Brandman

Robert B. Parker’s Killing the Blues
Michael Brandman
Back to Top