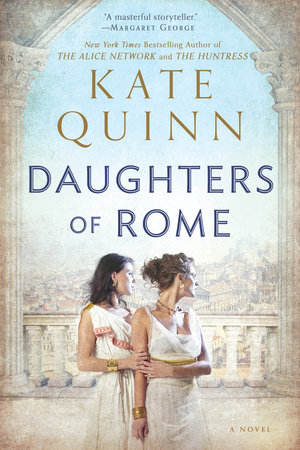 A.D. 69. Nero is dead. The Roman Empire is up for the taking. With bloodshed spilling out of the palace and on to the streets, chaos has become a way of life for Rome. The Year of Four Emperors will change everything—especially the lives of one family with a very personal stake in the outcome.

Cornelia embodies the essence of the proper Roman wife. She patiently waits to one day see her loyal husband as Emperor of Rome, but instead witnesses his brutal demise at the hands of the Praetorian guard. Her sister Marcella is content merely to watch the politics and turmoil, until she discovers she has more of a penchant for shaping history then for writing about it. And while their cousins Lollia and Diana are both beautiful girls, they each come to find that beauty and wealth cannot quell the desires of the heart. But when a bloody coup turns their world upside-down, each of these women must maneuver carefully just to stay alive…

Kate Quinn is a native of Southern California. She attended Boston University, where she earned a bachelor’s and master’s degree in Classical Voice. A lifelong history buff, she first got hooked on ancient Rome while watching I, Claudius at the age of eight. Her first novel, Mistress of Rome, has been translated into multiple languages. Kate lives in California with her husband.

Into the Wilderness
Sara Donati

Days of Splendor, Days of Sorrow
Juliet Grey
Back to Top