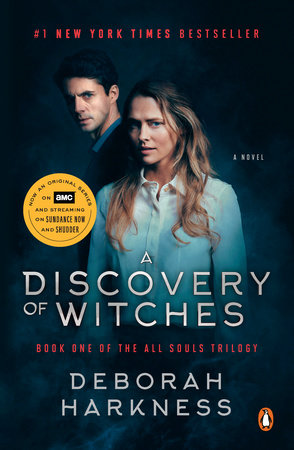 Diana Bishop has spent her entire life trying to deny who she really is. The only child of two powerful witches, orphaned when she was just seven years old, Diana has rejected her magical abilities, determined to pass as human. But with her unwitting discovery of a mysterious manuscript long hidden in the archives of the Bodleian Library, Diana is forced to face the heritage she has tried so hard to forget. The power of the enchanted manuscript, known only as Ashmole 782, is both tantalizing and intimidating and she quickly sends the book back to the stacks, hoping to return to her normal life. Unbeknownst to her, she has discovered a volume that can unlock all the secrets of her world and, in doing so, has ignited a war—and made herself the prime target.

Drawing on a wealth of knowledge about alchemy and the history of witchcraft, Deborah Harkness has crafted a fast-paced, intensely readable novel of magic, adventure, and romance. A Discovery of Witches charts Diana’s struggle to accept her family’s magical legacy, her growing understanding of the scope of the battle she has begun, and her dangerous alliance with handsome geneticist—and fifteen-hundred-year-old vampire—Matthew Clairmont.

Vampires, known for their jaw-dropping good looks and seductive charm, aren’t supposed to associate with witches, but Diana’s discovery has caught Matthew’s attention. Contrary to everything she has been taught and despite her initial reluctance and suspicion, Diana joins forces with Matthew to battle the dark spirits that are gathering around them. But cooperation quickly leads to attraction as Diana and Matthew begin to fall in love—an act forbidden by the Congregation, the covenant of witches, daemons, and vampires who dictate the rules of behavior for all underworld species and have the power to cruelly punish those who break them.

A complicated yet entirely relatable heroine, Diana must discover the surprising truth of her own legacy and realize the strength of her magic in order to prevent Ashmole 782 from falling into the wrong hands. Her journey, as well as her relationship with Matthew, will keep readers turning pages late into the night and have them hotly anticipating the next stage in her adventure. A world filled with enchantment and danger, sorcery and science, A Discovery of Witches is a sophisticated and smart novel that blends the excitement of a classic supernatural thriller with the intelligence that could be provided only by a respected scholar and skilled storyteller like Deborah Harkness.

Deborah Harkness is a scholar and writer specializing in the history of science and medicine. She has received numerous awards, including Fulbright, Guggenheim, and National Humanities Center fellowships. Currently a professor of history at the University of Southern California, her most recent academic publication is The Jewel House: Elizabethan London and the Scientific Revolution. This is her first novel.

A CONVERSATION WITH DEBORAH HARKNESS

Q. Diana is an appealing heroine, determined, accomplished, and yet aware of her own weaknesses. In what ways, if any, does Diana reflect your own experience or personality?

There are some similarities—Diana is also a historian of science, also interested in the history of alchemy, and shares some of my passions (including television cooking programs, tea, and rowing). Really, all the characters have some element of me in them. I think that’s how authors create imaginary people who nevertheless feel real. The rest of Diana’s character comes from a combination of qualities I admire in others, wish fulfillment, and my completion of the following statement: “Wouldn’t it be great if a heroine in a book was…”

Q. How did you become interested in the intersection of alchemy, magic, and science? Historically, what do you see as the relationship between science and religion or mysticism?

In college, I had a wonderful professor who taught a class on these subjects. To kick off the class, he asked us, “How do you know what you think you know?” I’ve spent the last quarter century trying to answer that question. Because the world is a mysterious place and our relationship to it is not always clear, people have often turned to science, faith, and magic for answers. They help people find responses to the questions of Who am I and why am I here?

It’s pretty hard not to notice the popular preoccupation with witches, vampires, and things that go bump in the night. But we aren’t the first to be fascinated with these creatures. Today, we often imagine them into fantastic otherworlds, but the people I study believed that such magical beings were living alongside them in this world. So I started thinking, if there are vampires and witches, what do they do for a living—and what strange stories do humans tell to explain away the evidence of their presence? A Discovery of Witches began with the answers to those questions as I essentially reimagined our modern world through the eyes of medieval and Renaissance people.

Q. On page 72, Matthew observes that Diana sees her work as a historian as similar to that of a detective. Is this how you approach your own research? Is a novelist also a type of detective?

I definitely see my historical work as a process of detection. Historians fit pieces of evidence together and hope that they eventually form a coherent picture. Often, a historian’s most compelling questions—and the most difficult to answer—concern personal motivations and why something happened the way it did. These are questions we have in common with detectives. Fiction is more like alchemy, though. You take a little of this, a little of that, combine it, and hope that something wonderful occurs so that your creation is greater than the sum of its individual parts. Novelists, like the alchemists of old, know that true creation takes time and patience, and that it’s likely you will have many disasters and failures before you achieve success.

Q. What prompted you to include both first-person and omniscient narration? What does each method of storytelling contribute to the book?

Early in the process of writing the book I realized that vampires must be secretive and protective creatures. For Matthew, this means he has both a strong instinct to hide from Diana’s questions and a need to protect her from threats. The only way to show that dynamic in Matthew (without making the reader very impatient with him) was to take Diana out of the picture temporarily and show him interacting with others who knew him in other ways. Since Diana is the first-person narrator, this caused some problems that omniscient narration solved. I think the combination of the two narratives works surprisingly well and gives the reader the immediacy of Diana’s experience along with some answers to their questions about Matthew.

Q. Elias Ashmole and Ashmole 782 are taken from real life. Who was Elias Ashmole? Why did you base your novel on this particular manuscript?

Elias Ashmole was a seventeenth-century English antiquarian and scholar. He gave major bequests to Oxford University, including the collection of books and objects that provided the foundation for the Ashmolean Museum (which is still in operation today). Ashmole’s books and manuscripts were first kept at the museum and then moved to the university’s Bodleian Library in the nineteenth century. The Ashmole manuscripts include numerous rare alchemical texts. One of the manuscripts, Ashmole 782, is currently missing. As a scholar, I’ve done a lot of research in the Ashmole alchemical manuscripts and always wondered what Ashmole 782 might contain.

Q. There are many references in the novel to literary works and authors throughout history; for example, pages 148 – 149 include an exchange of quotes about the passage of time from writers Ben Jonson and John Milton. Do the references and quotes you’ve incorporated have any personal significance for you?

These are two authors I admire and enjoy, but the passages had no special meaning for me until I wrote A Discovery of Witches. A good romance needs a combination of tension and common ground, however, and I wanted books and literature to provide that for Diana and Matthew. A little homework in the literature of Diana’s period of specialization provided the perfect sentiments for that scene.

Q. What was your inspiration for the concept of the Congregation and its trinity of daemons, witches, and vampires?

Both came from my desire to imagine extraordinary creatures into our modern world. I reviewed ancient and medieval ideas about the organization and creation of the universe and was struck by how many of them use organizing principles based on the numbers 3, 4, and 7. Four species of creatures—daemon, human, vampire, and witch—were soon central to the novel. But I was still troubled by the problem of how humans could be surrounded by such beings and not know it. The Congregation was useful in resolving that issue because it’s an organization dedicated to preserving and protecting daemons, vampires, and witches from the majority of the population—which is human.

Q. From the publication of Bram Stoker’s Dracula in the nineteenth century to the current Twilight series, vampires have always fascinated the reading public. What is the appeal of the occult novel? What kind of freedom from the ordinary does it provide, both for readers and writers?

Vampires are relative newcomers among the supernatural creatures who have fascinated readers. The word “vampire” wasn’t even used in English-speaking countries until the early eighteenth century. Before that, readers were far more interested in ghosts, devils, witches, daemons (and demons), and exotic hybrid creatures like dragons and the basilisk. The appeal of all these creatures—and vampires, too—is that they help to explain the inexplicable. Readers and writers are given the opportunity to suspend belief and wonder How do I know there aren’t witches? and even more important What if there are?

Q. When writing a novel that involves the supernatural, it’s necessary to create a framework for that invented world, a set of rules to maintain consistency and credibility. How difficult is it to establish that kind of structure and to faithfully work within it?

Q. Diana and Matthew’s story ends on a mysterious note. What do you see as the next step in their adventure?

Diana and Matthew have known each other only for forty days. That’s not much time to get to know someone and fall in love. Besides, falling in love is rather easy compared with staying in love and growing into a relationship. The next step of their adventure will begin just where their last step left off—and the adventure will involve all kinds of new discoveries about themselves, each other, and the creatures who share their world.

Learn More About A Discovery of Witches (Movie Tie-In)
print

The Book of Life (Movie Tie-In)

The Bear and the Nightingale

Uprooted
Back to Top