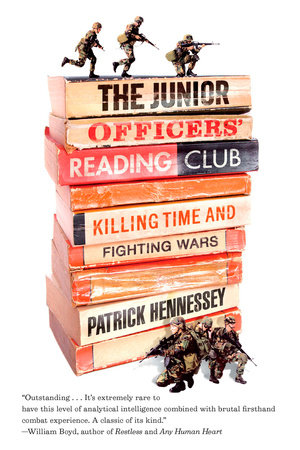 INTRODUCTION
Patrick Hennessey grew up on war stories. The son of an officer who had served in the first Gulf War, and named after a grandfather who was “a retired Cavalry officer [and] veteran of the Normandy landings” (p. xiv), he knew more than most cadets about what the future held when he began training at Britain’s elite Royal Military Academy Sandhurst. Still, nothing could prepare him for the twinned horror and exhilaration that he would encounter as a platoon commander on the bloody fields of Afghanistan and Iraq.

After graduation, Hennessey is posted in the Grenadier Guards, Inkerman Company heading for Kandahar. “What we were dreaming of was getting out there and having a fight” (p. 11). Instead, they are detailed to train an Afghan National Army battalion. Hennessey’s military life up until now has been larded with periods of stifling boredom, but nothing as intensely frustrating as being confined to the safety of camp full knowing that the battle is elsewhere.

There Hennessey and his fellow junior officers informally come together in the eponymous club of the memoir’s title. All too soon they are scattered to postings in the thick of the action they’ve been hungering for, and some of them are wounded or killed. Thrust into positions of command, first in Iraq, then in Afghanistan, Hennessey continues to reflect on the questions that drew them together, and the often overwhelming responsibilities they’ve now assumed. What draws someone to the military life? How has the nature of warfare been altered by modern technology? Is the romanticism of war necessary? What’s the best soundtrack to a raid—gangsta rap or heavy metal?

In the end, Hennessey offers no hard answers, only the hard-won reflections of a man who comes of age amidst unbelievable violence, and—for his gallantry—becomes the British army’s youngest captain. “I can already feel both how glad I will be when it is over and how much I will miss it. How difficult to convey to anyone that matters something which they will never understand, and how little anything else will ever matter” (p. 249).

Patrick Hennessey was born in 1982 and joined the army in January 2004. On operational tours to Iraq in 2006 and Afghanistan in 2007, he was promoted in the field to become the army’s youngest front-line captain and was commended for gallantry. Patrick is currently studying law and hopes to specialize in conflict and international humanitarian law. He lives in London.

AN Angel From Hell
Ryan A. Conklin

Everything We Had
Al Santoli

The Great Leader and the Fighter Pilot
Blaine Harden

Death in the A Shau Valley
Larry Chambers

A Life in a Year
James Ebert

Bones of the Master
George Crane

Shrapnel in the Heart
Laura Palmer

All In
Paula Broadwell and Vernon Loeb

For Love of Country
Howard Schultz and Rajiv Chandrasekaran