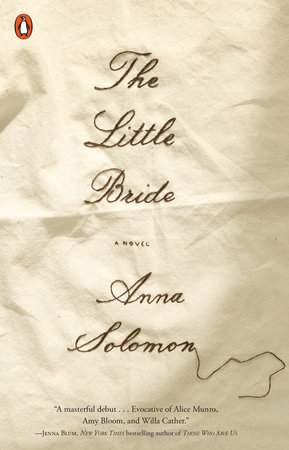 When 16-year-old Minna Losk journeys from Odessa to America as a mail-order bride, she dreams of a young, wealthy husband, a handsome townhouse, and freedom from physical labor and pogroms. But her husband Max turns out to be twice her age, rigidly Orthodox, and living in a one-room sod hut in South Dakota with his two teenage sons. The country is desolate, the work treacherous. Most troubling, Minna finds herself increasingly attracted to her older stepson. As a brutal winter closes in, the family’s limits are tested, and Minna, drawing on strengths she barely knows she has, is forced to confront her despair, as well as her desire.

Anna Solomon received her MFA from the Iowa Writers’ Workshop. Her work has appeared in The New York Times Magazine, One Story, The Georgia Review, and elsewhere, and has twice been awarded a Pushcart Prize. Formerly, she produced and reported award-winning features for National Public Radio’s “Living on Earth.” She lives in Providence, RI.

The Fair Fight
Anna Freeman
Back to Top