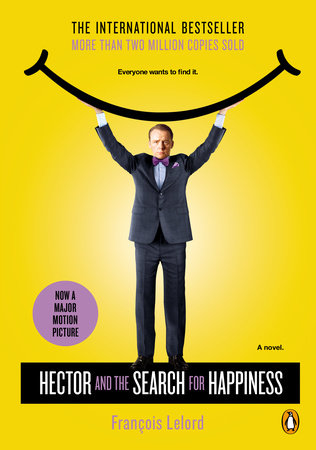 Hector is a successful young psychiatrist with the right spectacles, the right office furniture, and all the right medications at his disposal but he feels like a failure. His patients—an urban, educated, and seemingly privileged class of people—are persistently unhappy, and despite his excellent training and sympathetic ear, Hector doesn’t know how to truly help them. Even worse, he finds himself becoming increasingly drained and dissatisfied by his own life, including his uncertain relationship with an equally successful pharmaceutical marketing professional named Clara.

Ready for a break, Hector books a vacation with a mission: He will travel the world in search of what makes people happy or unhappy. Since Clara is too busy with work, he sets out on his own, stopping first in China to visit his old school friend Édouard. Through Édouard, a lonely businessman trapped on the money-making treadmill, he learns one of his first lessons—that no matter how fine the wine, happiness can’t really be bought. He also meets a young woman, Ying Li, who teaches him about love, and an elderly monk who questions the very nature of his journey but invites him to return when he’s completed it.

From there, Hector travels to Africa to visit another friend, a doctor working with impoverished patients. Here again, Hector finds plenty of new inspiration in his study of happiness, from a meal with a local family to cheerful conversations in the hotel bar with a drug lord and a bartender. When he has a run-in with the local mob and is held hostage in a storage closet for a terrifying spell, however, he finds himself faced with newer, starker realities.

Narrowly escaping his death, Hector travels to the United States to meet with a happiness expert. He shares his collected wisdom with the scholar and manages to draw a few more conclusions about the connection between happiness and relationships. After returning to meet with the Chinese monk a second time, Hector is finally ready to put his learning to work—and bring his hard-won research home.

This charming debut from psychiatrist and self-help author François Lelord—now an international bestseller—is an engaging parable about modern man’s never-ending search for contentment. Told with a fairy tale’s naïve wisdom and a satirist’s dry wit, Hector and the Search for Happiness distills a complex world of immigrant peasants, kindly drug barons, doctors without borders, depressed psychics, and lovelorn academics into a feel-good life manual.

François Lelord has had a successful career as a psychiatrist in France and the United States. He is the coauthor of a number of bestselling self-help books and has consulted for companies interested in reducing stress for their employees. Since the enormous success of Hector in France and abroad, he has written three subsequent books about Hector’s journeys.

A CONVERSATION WITH FRANÇOIS LELORD

Q. Hector and the Search for Happiness was inspired by your own search for happiness in some measure. Can you explain how the book came to be?

At that time I felt a little exhausted by my professional practice, and not feeling like writing the new self-help book my publisher was waiting for. During a trip in Hong Kong when I was questioning my personal and professional life directions, Hector character popped up in my mind. I wrote Hector’s Journey with jubilation in a few weeks, not knowing exactly what kind of book I was writing, and why I had chosen at first this fairy-tale style.

Q. Your prose in this book is quite spare, with a folktale’s simplicity. How did you arrive at this particular style of writing?

Afterwards I realized than I have been influenced by some masterpieces that every French schoolboy had to read in the sixties, specially, Candide by Voltaire, Le Petit Prince by Saint-Exupery, and I realized recently Kafka, in the adventures of the naïve Kark in Amerika, one of my favorite books.

Q. You have also written self-help books. Are there any parallels between writing fiction and writing self-help literature, either in terms of your process or the ideas that you’re exploring?

For me these are different process. Writing nonfiction implies a lot of planning and checking; it’s like building a piece of furniture, you have to design it at first, to look for materials in advance. Writing fiction is for me the opposite, you write everyday in kind of daydreaming state, just trying not to loose your track, in the case of Hector writing about happiness.

Q. How did you choose the particular destinations for Hector’s journey?

It came from trips I had at that time and the years before, the ones which had left me with unforgettable—and so emotional—memories.

Q. Hector’s list of guiding principles for happiness becomes a sort of road map for him as he travels. Did you start out writing the book with these principles in hand or did they come to you along the way?

I started writing already loaded on the academic literature and philosophy I have happened to read on happiness, my personal experiences, and the ones of my patients. But no planning then, the principles popped up naturally according the situations who came along the trip.

Q. How did the real-life academic research on happiness inform your story? Had you read much of it before you started writing or did you investigate it specifically for this book?

No, for that book, but I have read a lot of happiness academic literature for a former book about emotions. And so the lessons can be read at different levels. First, one can find a little humorous that a supposed so knowledgeable psychiatrist writes seemingly so naïve lessons. (I know that some people may miss that kind of fun and ask a little angrily why the lessons are so simple!) But in fact they are a simple formulations of the conclusions of most of the academic research of happiness, and obviously of some philosophers too. For example “happiness is to have a house and a garden” is a simple truth, a plus in Quality of Life indexes, but a reference to Epicure, too. “Happiness is a way of seeing things” is a reference to cognitive theories on happiness and to Stoician philosophy. And later the Professor tells Hector more about real theories of happiness. But one can enjoy Hector’s lessons without knowing anything about philosophy and psychology and I am happy about that!

Q. You tackle some complicated topics in this novel—racism, class disparities, the impact of colonialism, sexual exploitation—yet you’ve managed to keep the proceedings relatively simple, allowing certain themes to resonate without letting the story get bogged down by big issues. Was this a challenge for you as the author?

Not really, I must be very superficial! Maybe not so, I hope, but at the level of a philosophical tale you don’t have to explore systematically all the issues, but just to show them in a way to make the reader think. I didn’t invent that genre: geniuses to whom I don’t compare myself came before me: Voltaire, Montesquieu, Swift…

Q. One of the most intriguing lines in the book is: “You must be careful when you ask people whether they’re happy; it’s a question that can upset them a great deal.” Why is happiness—ostensibly something everyone wants—such a sensitive issue?

Because in our Western culture, and maybe specially in the United States, we are supposed to be free beings and so responsible for our own happiness, which at the same time has become a supreme value. (Opposite to some times ago when you had to accept that your life was determined by social order, untreatable plagues, and God, and when duty was more valued than happiness.) So today, not being happy is not far from acknowledging a kind of personal failure.

Q. Most of Hector’s lessons on happiness go beyond the realm of traditional psychiatry. How has writing this book and its sequels affected your relationship to modern medicine?

Not much I think, because modern medicine, and of course psychiatry, is more and more concerned about happiness and well-being or the patients, I have seen that evolution since I was a medical student, and for the first time in my UCLA-Veteran hospital year, where my mentors’ teams were concerned about the well-being of chronic mental patients, not only reducing their symptoms.

Q. Hector has struck a chord in your native Europe. What is it about this story that speaks to readers?

As an author, you never really know. But I got some letters. Some people were sensitive to the humor of the book, and told me it made them smile and cheered them up. Other ones told me it made them cry, but still they liked it for that. Many told me that it helped them to put their worries in perspective at some difficult times. As you can imagine, all of those comments made me happy.

Nothing to Be Frightened Of
Julian Barnes

In the Country
Mia Alvar

Close to the Knives
David Wojnarowicz

Dear Friend, from My Life I Write to You in Your Life
Yiyun Li

In the Presence of Absence
Mahmoud Darwish

For the Time Being
Annie Dillard

A Man Without a Country
Kurt Vonnegut

Of Love and Other Demons
Gabriel García Márquez

After the Quake
Haruki Murakami

The Autobiography of Alice B. Toklas Illustrated
Gertrude Stein

My Reading Life
Pat Conroy
Back to Top