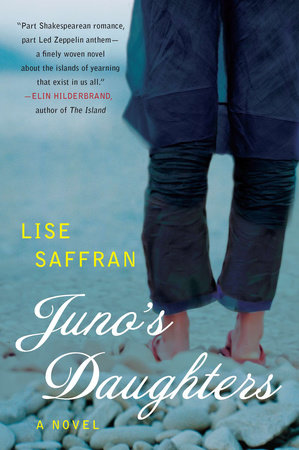 INTRODUCTION
Jenny Alexander and her two daughters, Lilly and Frankie, have resided on San Juan Island, off the coast of Washington State, for most of the young girls’ lives. Their existence has been sheltered but full, for the most part, yet lately Jenny’s been wondering whether the choices she made for her family were the best ones.

Impulsive and willful Lilly, newly graduated from high school, chafes under her mother’s close and careful eye, and sweet and innocent Frankie is just beginning, at thirteen, to experience the cruel machinations of fate when her best friend announces that she’s moving. And then a new group of actors arrives for the summer, rehearsing for a production of The Tempest, and the lives of all three Alexander women are thrown into disorder.

Jenny finds herself competing, unwillingly, with her own daughter for the attention of a handsome actor. Lilly spends each minute on the Island as if it were her last, wild, reckless, and increasingly resentful of the physical and social limitations the Island life dictates. Frankie develops an impossible, bittersweet crush. And all three find themselves with parts in the play, an exercise that at one point seemed like a wholesome family activity, and now threatens to wrench them even further apart.

By the summer’s end, like Prospero, the exiled duke in The Tempest who dabbles in magic, Jenny must renounce her old habits if she is to return to some semblance of happiness and contentment. And her daughters must learn to navigate the “brave new world” laid open to them during this bizarre and unprecedented summer, both with and without their mother’s protection.

Lise Saffran is a graduate of the Iowa Writers’ Workshop, where she was an Iowa Arts Fellow. Her short fiction has appeared in a variety of literary magazines. She lives in Columbia, Missouri, with her husband and two sons.

A CONVERSATION WITH LISE SAFFRAN
Q. While the readers of your novel can easily enjoy and take meaning from the narrative without being familiar with The Tempest, what parts of the play influenced the novel’s plot and/or its characters? Jenny spends time thinking about Prospero’s relationship with Miranda and its parallels to her own relationships to her daughters, but where else do you see, most heavily, the influence of the play over your writing?

The idea of emotional legacies in families, whether of enmity or shame, is compelling to me in the play and in real life. Miranda and Ferdinand have both been shaped by their histories, but will they be able to incorporate the knowledge of the past while creating a more positive and loving future with each other? Can Prospero let his anger go? Similarly, Jenny has to confront the legacy that she may be leaving to her daughter, Frankie. She has to ask herself whether she is capable of making a change. Not changing the facts of what happened to her, because that is impossible, but changing the way she thinks about herself and her life.

Q. The characters in your novel play and sing a lot of old time music, and in the novel’s acknowledgements you thank a group of musicians for providing you with inspiration. Do you play old time or traditional folk music yourself? Why was it important to have music play a prominent part in the novel, in addition to other artistic forms, like dancing and Jenny’s weaving?

I’m interested in the way community sustains and defines individuals and playing music together (as well as putting on a play!) can really build a community out of a group of neighbors. I’ve certainly experienced that in my own life. My house and my friends’ houses are visited a couple of times a month by a revolving group of musicians who bring food, their instruments and their children and spend the evening playing a lot of the songs that are included in the book. When my younger son was seven he sang “Corn Bread and Butter Beans” in music class at school and I had to explain to him why his teacher got a funny look on her face when he got to the line, “Eatin’ beans and makin’ love!” A number of the kids have begun playing fiddle, guitar and mandolin, as well, though frankly they’re more likely to pick out the chords for “Smoke on the Water” than “John Hardy”.

Q. There are a lot of characters in this novel. What were some of the challenges that came with writing a story with so many personalities? What did you struggle with the most, in terms of character development? Which characters came most easily to you, as you wrote the book?

Lilly was fun to write and probably came most easily. As a former teenage girl and someone who’s heard lots of stories from friends about their children (I have only boys) I know all about the interesting trouble that they can get into. Frankie came pretty easily, too, as I am surrounded by pre-teens and young teenagers at the moment and am constantly amazed by the shifting aspects of innocence and resilience that they display. It was occasionally difficult to balance the goal of creating a lot of ensemble moments, where people are talking over each other and exiting and entering, with a story in which major characters are adequately developed in their own right. Jenny, as the character most in focus, presented a number of challenges. Although her life experiences are very different than mine, she was the character I put the mothering part of myself into and having done that, it was occasionally hard to get the distance I needed in order to let her live her own story.

Q. Where did you get the idea to write one of the chapters as a play? Did this work as easily as you’d anticipated? In what ways did this part of the novel meet, exceed, or fall short of your expectations?

As I mentioned above, I was hoping to give the reader the impression of a small, tightly knit community. About mid-way, I sensed the need to let some air into the novel or risk it becoming a bit claustrophobic. There is also the possibility that the reader feels him or herself to be too much on the outside of the action. The “chapter-as-play” was a way to raise the tent and invite everyone back in, to let readers feel that they are once again right in the center of the story, but hopefully without it becoming too confined. It was hard, though! That chapter called for totally different skills than writing the others and it left me with a renewed respect for playwrights.

Q. Do you have another novel in the works? What are you working on at present?

I’m working on two things at once (in typical multi-tasking fashion). On the one hand, I’m revising a collection of linked stories, most of which are set in the Bay Area, but with one set on San Juan Island. I’ve also started a novel about a brother and sister that is set on Lopez Island, although I think this may be my last piece of fiction set in the San Juan Islands.

The Way It Happens In Novels
Kathleen O’Connor

Upon a Midnight Clear
Catherine Mulvany

Only You
Bonnie Pega

How to Save a Life
Eva Carter

738 Days
Stacey Kade
Back to Top