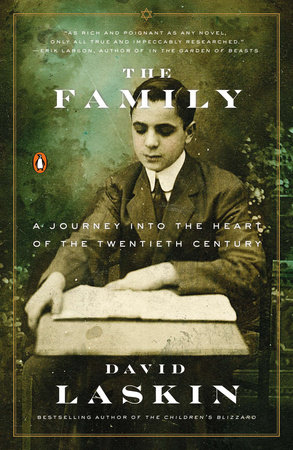 David Laskin has written the story of his family, and in doing so he has given us a sweeping historical account of the Jewish experience in the twentieth century. Opening on the western edge of the Russian Empire at the turn of the last century, The Family tells the story of a Torah scribe and his wife, and how their descendants took three dramatically different journeys spanning multiple continents and two world wars. In following his family’s triumphs and hardships with rapt concern, Laskin has crafted a diaspora story that is at once intensely personal and resoundingly universal.

In the pages of The Family, we learn how some of Laskin’s ancestors voyage west to the crowded tenements of New York City’s Lower East Side, some stay in the yeshiva town of Volozhin in the midst of bitter Tsarist pogroms, and some struggle to establish a burgeoning agricultural village in Palestine’s Hefer Valley. Using sources that range from gripping family letters to U.S. Census records to archival Holocaust testimony, Laskin masterfully animates one family’s journey with skill and ingenuity. The Family is the dazzling product of impeccable research and expert storytelling.

Though they descended from a long line of Torah scribes, Laskin’s relatives went on to become entrepreneurs in a new world, warriors at the frontlines of World War I, pioneers at the frontier of a spiritual homeland, victims among the millions that tragically perished under Nazi rule. There is even a tycoon on the family tree—a four-foot-eleven-inch immigrant named Ida Rosenthal who was the dynamo behind the Maidenform Bra Company. Laskin’s exploration stands as a testament to the tangible ways in which we all, inevitably, are shaped by history. A love song to the art of genealogy, The Family will inspire readers to investigate their own origins.

David Laskin was born in Brooklyn and raised in Great Neck, New York. He is the bestselling author of The Children’s Blizzard, which won the Washington State Book Award and Midwest Booksellers’ Choice Award for nonfiction. The author of several other works of nonfiction, Laskin writes for the New York Times and the Washington Post. He and his wife, the parents of three grown daughters, live in Seattle.

Learn More About The Family
print

Things I’ve Been Silent About
Back to Top