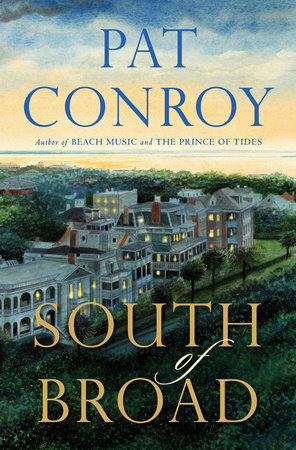 1. James Joyce’s Ulysses is brought up several times in South of Broad— Leo’s mother is a top James Joyce scholar and she named both her sons after Ulysses’s main characters. What’s the signifi cance of this? Why did Conroy choose Ulysses to be the all-consuming passion of Leo’s mother?

2. Leo’s mother doesn’t exactly approve of his friendships with Starla, Niles, Sheba, and Trevor, yet without her intervention, it’s unlikely he would have met and befriended any of these characters. What do you make of this?

3. Leo is described as being a plain boy from the very start of the novel and his unfortunate nickname is the Toad. Fraser, too, is less than beautiful—she is defi ned by her failure to be fully feminine, by her broad shoulders and muscular limbs. Other characters, such as Stephen, Sheba, Trevor, Molly, and Chad, are described by their physical beauty. What role does beauty play in the book? How are the beautiful characters different from the homely ones?

4. Leo realizes that he never would have inherited “the best house in Charleston” if he had revealed the identity of the boy who made him carry cocaine. Leo’s great good fortune was the result of sacrifi ce. Where else do we see this in the book?

5. One of the book’s most memorable images is the “crying” smiley face that Trevor and Sheba’s father uses as his calling card. How do you interpret this symbol and its prevalence in the book?

6. Leo bonds with his friends when there is almost a race riot on the fi rst day of their senior year of high school. By working together, Leo and the other students manage to prevent violence. Revisit this scene. What does it reveal about the characters and their relationships with one another?

7. Leo is an extremely successful matchmaker for everyone except himself. While Fraser and Niles and Ike and Betty have blissfully happy marriages, Leo’s marriage to Starla is unbearably painful for both of them. Why does Leo fail so badly in choosing his own wife?

8. Some of the book’s characters are moored in the past: Chad can’t overcome his father’s legacy, Molly is incapable of imagining a life without Chadworth Rutledge X, and Starla can’t conquer her hellish childhood. Why, do you think, are some characters able to grow beyond their backgrounds and others aren’t?

9. The fraught scene at the beginning of the novel in which Leo’s family lunches with Chad’s and Molly’s families is called to mind at the end of the novel when these same characters reunite under different circumstances. This time they are trying to weather Hurricane Hugo in Fraser and Niles’s house. How has the dynamic between these characters changed since their fi rst lunch together? Who has changed the most?

10. Hurricane Hugo transforms the Charleston that Leo loves into a chaotic, dirty mess, practically destroying his childhood home. The storm comes after Sheba’s murder and before the terrible revelation that Stephen was raped by Monsignor Max. What does the storm symbolize?

11. Sheba and Trevor’s father seems almost superhuman—he manages to escape detection for decades and attacks his children and their friends at will. Ultimately, though, he is brought down, not by any of the characters, but by the viciousness of Hurricane Hugo. Why did Conroy make the choice to end this character’s life with a force of nature?

12. Charleston is practically a living and breathing entity in the book. Which character most closely echoes the “soul” of the city? 13. What’s the signifi cance of the dolphin that Leo and Molly save? 14. Leo’s mother is deeply critical of Leo and his friends at the beginning of the novel, but by the end of the novel she and Leo seem to have developed a deep and loving relationship. What has changed?

13. Acting is a prevalent theme in this book—from Sheba’s movie star fame to her father’s ability to change his identity at will. At the end of the book, Leo identifi es himself as the “greatest actor of them all.” How do you interpret this? Do you agree with Leo? Does this affect your reading of the book?

14. Were you surprised that Molly stayed with Chad? Do you think she would be happier with Leo?

15. At the end of the novel, Leo tells us that Chad visited him every day while he was in the hospital. Does this change your understanding of Chad? How?

16. In South of Broad, the two characters most associated with the Church are very different from one another. On the one hand there is Leo’s mother—a woman who, despite a prickly exterior, is deeply pious; and on the other hand there is Monsignor Max—a charismatic man who uses religion to excuse reprehensible behavior. What is Conroy trying to say about religion?

17. Do you think the revelation that Stephen was sexually abused brings any closure to Leo?

18. We don’t find out how Leo’s mother reacts to the news that Monsignor Max terrorized her son Stephen and drove him to suicide. Do you think this terrible news would have affected her religious devotion or her decision to reenter the convent?