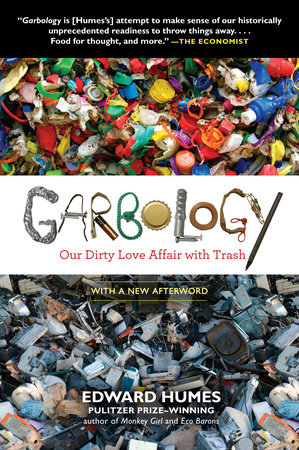 INTRODUCTION
“It’s tough to overcome an addiction when you can’t even admit how big a problem you’ve got” (p. 9)

Edward Humes wants us to think about garbage—specifically the world–record–breaking 102 tons that the average American will produce in his or her lifetime. For the majority of us, garbage is something that is whisked away from our homes once a week and just as cleanly erased from our consciousness. A Pulitzer Prize winning reporter and bestselling author, Humes warns that we are on the brink of a dangerous precipice, sounding an urgent wake–up call to the true economic and ecological price of our garbage.

Since the dawn of civilization, municipal leaders have grappled with the question of how to best handle waste and “the resulting hazard, filth, disease, and odor” (p. 27). The streets of the Roman Empire were built upon successive layers of discarded rubbish, and the rotting trash of medieval Paris rendered its citizens vulnerable to both attacking foes and the bubonic plague.

Over time, advancements in transportation and landfill engineering have made garbage disposal easier and more remote from our everyday lives. For the past thirty years, Los Angelenos have sent their waste away to the Puente Hills landfill, a 1,365–acre, one hundred and thirty million ton mountain of trash producing “a constant flow of 31,000 cubic feet a minute of landfill gas” (p. 23).

Almost wholly removed from the rot and stench of their garbage, however, Americans have adopted an out–of–sight, out–of–mind attitude. Enabled by cheap waste removal and driven by post World War II consumer culture and the proliferation of plastic goods and packaging, “America, with just 5 percent of the world’s population, accounts for nearly 25 percent of the world’s waste” (p. 9). Landfills at least partially contain some of the pollutants, but “the United Nations estimates that a minimum of 7 million tons of trash ends up in the ocean each year” (p. 121).

Indeed, anyone who’s walked on the beach has seen the plastic detritus that litters America’s coast. Less visible—but posing a greater threat to marine wildlife and ultimately the planet’s wellbeing—is the floating plastic garbage that is converting our once pristine oceans into plastic soup. “Plastics can leach potentially toxic chemicals over time” (p. 119) and these particles are finding their way into the oceanic food chain.

Many Americans now recycle, but most environmental advocates believe that recycling is just a panacea. Historically speaking, archeologist Bill Rathje notes “cultures replace extravagance with frugality only after the resources have dried up” (p. 163). The only real solution is to reduce our garbage production and to follow the lead of countries like Denmark and Germany that are successfully turning garbage into energy, weaning themselves from foreign oil in the process.

Both sobering and inspiring, Garbology is a much–needed inquiry into America’s trash habit. Humes interweaves his compelling narrative with history and statistical data as he profiles a range of “trash optimists,” (p. 13) scientists, artists, small business people, and ordinary citizens whose lives and work point the way forward to a cleaner, safer future—if we choose to listen.

Edward Humes is the author of eleven critically acclaimed nonfiction books, including Force of Nature, Monkey Girl, Over Here, School of Dreams, No Matter How Loud I Shout, and the bestseller Mississippi Mud.The winner of a Pulitzer Prize, a PEN Center USA award, and numerous other honors for his journalism and books, he has written for The New York Times, the Los Angeles Times, Los Angeles Magazine, and Sierra.Humes lives with his family in California.

A CONVERSATION WITH EDWARD HUMES

Q. Why did you decide to write about garbage?

Everybody knows waste is a problem. But did you know trash is now America’s biggest export? That one of the tallest structures in Los Angeles is a mountain of garbage? That the average American is on track to make 102 tons of trash in a lifetime, twice what we were rolling to the curb in 1960?

Garbology began with a simple question: Is there a way back from our disposable economy, this addiction to waste? The short answer is: yes. I found a growing number of families, communities, and businesses doing just that –– cutting waste and prospering in the process. Garbology is their story.

Q. What was the most surprising thing you discovered during your research?

The most surprising part of the story is just how wasteful we are without really knowing it –– the true numbers are much worse than the official line. Almost as surprising: Being less wasteful is liberating, timesaving, and wealth–creating. Waste is one of the few big societal, economic and environmental problems ordinary people can fix.

Q. Did researching garbage make you more aware of your own trash habits? Do you throw out more or less now?

Absolutely. My family has made a real effort to cut down on waste by refusing the trashiest stuff (plastic shopping bags, excessive packaging, non–recyclable products, disposables) and repurposing or recycling the rest. It’s a start.

Q. Is there a viable solution for getting rid of our trash, other than landfills? Sure. Landfills are glorified town dumps, a low–tech solution as old as ancient Greece. Landfilling rather than repurposing trash wastes billions of dollars –– burying treasure while creating environmental havoc. Other countries with vibrant economies send almost nothing to landfills. They use clean power plants to make heat and electricity from trash. They recycle more. They reject disposable, high–waste products.

Q. What do you think of reality shows like Hoarders that showcase our garbage? They lead us to believe that those men and women with trash–filled homes are aberrations. But the amount of waste hoarders accumulate is completely normal. It’s just that the rest of us hide it in landfills, deceived by the illusion that our waste can be rolled to the curb then magically disappear. But it doesn’t disappear. It drags down our economy, our environment and our future, because waste is another word for money squandered. Hoarders understand this better than most.

Q. Who is more wasteful? Business and industry, or individual Americans? Who needs to reform their ways more? Both need to rethink the disposable economy (and many companies already are). In terms of volume, business and industry make the most waste. But because that trash is created to provide goods and services, consumers are ultimately responsible for embracing –– or rejecting –– the disposable economy by ”voting with their wallets.” The thing to remember is that waste costs money, which means wasting less saves money. And that’s a truism on Wall Street, Main Street and everywhere in between.

Q. What are the unexpected consequences of the amount of trash we produce?

–Oceans and beaches littered with millions of tons of plastic.

Q. What can we learn about ourselves from our trash? If you could sit down with a year in the life of your waste bins dumped on your front lawn, you’d be shocked by the size of the mound: 1.3 tons, on average. That’s 50% more waste than your Danish counterpart makes. Twice as much as the average Japanese citizen. And you’d see that much of what you buy ends up in the trash within a year. What at waste!

Q. Is it truly possible to live waste–free? The process of living makes waste –– there will always be some. But can we lower our individual waste footprints? Yes, anyone can. Most families could cut their trash 30 to 50 percent without breaking a sweat, and save money doing it.

Q. What are five things anyone could do to put their 102–ton legacy on a diet?

1.Refuse. From unwanted mail–order catalogs to grossly over–packaged produce, just refuse them. Say no to promotional key chains and tchotchkes that come free at conferences and fundraisers. You know it’s junk, and accepting it just encourages more. Refuse.

2.Buy Used and Refurbished. Keep resources out of the waste stream, save money.

3.Stop Buying Bottled Water. It’s a waste and a fraud.

5.Buy Wisely, Buy Less. The disposable economy wants you to think about the price at the cash register, not what it costs to own in the long run. That’s how we end up with cheapo DVD players that get trashed in a year and clothes that fade and wear out after a few washes. Saving up for fewer products that are more durable, efficient and higher quality costs less over time and radically reduces waste.

How to Give Up Plastic
Will McCallum

Notes from an Apocalypse
Mark O’Connell

The Soil Will Save Us
Kristin Ohlson

The Botany of Desire
Michael Pollan

How the Body Works
DK

A Natural History of the Senses
Diane Ackerman

How We Die
Sherwin B. Nuland

How to Avoid a Climate Disaster
Bill Gates

Why Evolution Is True
Jerry A. Coyne

A History of the World in 100 Objects
Neil MacGregor

The Story of the Human Body
Daniel Lieberman

Help Your Kids with Geography
DK