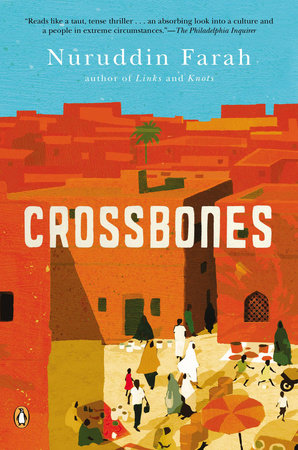 In the African nation of Somalia, the setting for Nuruddin Farah’s gripping novel Crossbones, airport security personnel are armed with whips. Children face summary execution for the crime of going to the wrong house. On the country’s dusty and forsaken streets, the men whom the outside world has condemned as pirates can appear to be a community’s best—though still unlikely—chance for wealth and social justice. The Somali government in Farah’s tale seems to exist only to lob provocative taunts at the country’s heavily armed neighbor Ethiopia, and to be a journalist means being a target for assassination.

Into this atmosphere of chaos and continuous threat come two brothers of Somali ancestry, both lured back to the country of their forebears in search of answers. Malik, a freelance journalist based in New York, has come to report on the doings of the country’s dysfunctional, religiously fundamentalist government, the Union of Islamic Courts. Although Malik has previously reported from Iraq, the Congo, and Afghanistan, nothing has quite prepared him for the reception that awaits him on the streets of Mogadiscio. For Malik’s older brother, Ahl, the search for information has a more personal, and therefore more desperate, character: his high–school–aged stepson, Taxliil, has run away from his comfortable, middle–class home in Minneapolis. Word has reached the family that Taxliil, under the influence of a jihadist imam, has traveled to Somalia, intent on training as a suicide bomber. The searches commenced by Malik and Ahl transform at once into a race against time. Will Malik be able to file his stories and leave the country before the tide of violence against foreign journalists reaches him? Will Ahl track down Taxliil before the young man can carry out his fatal mission? And will either brother achieve his aims before the region erupts into full–scale war?

Along the winding road that leads them toward the knowledge they seek, Malik and Ahl have many other lessons waiting for them. Malik will have his property confiscated by armed thugs in the name of “the good of all,” and he will help bear the casket of a murdered journalist to his grave. In the destitute, crime–infested region of Puntland, Ahl will form friendships of convenience with known pirates and will set himself continually at peril. Both brothers will discover that little in this land is what it seems and that, of all the things in short supply, truth can come at the most terrible price of all.

The climactic third volume of Farah’s internationally acclaimed Past Imperfect trilogy—including Knots and Links—Crossbones takes the series to a new level of intensity, both in the tension and violence of the story it tells and in the passion with which the author laments the state of his native land. A taut and compelling story, Crossbones is also indispensable reading for those who seek to know the dangers and the struggles of everyday life in the Horn of Africa, a place that, though distant, now wrestles with a destiny that may not be so very separate from our own.

The son of a merchant father and a poet mother, Nuruddin Farah was born in Baidoa, Somalia, in 1945. Throughout a literary career that has spanned more than forty–five years, Farah has been an outspoken advocate for human rights and, in particular, the rights of women in postcolonial Africa. Because of his long insistence on speaking truth to power, Farah was at one time threatened with imprisonment in his native land. During a long self–imposed exile, he has taught in the United States, Germany, Italy, India, and a number of African countries. He currently divides his time between Cape Town, South Africa, and Minneapolis, where he occupies an endowed chair in liberal arts at the University of Minnesota. Crossbonesis his eleventh novel and it concludes his Past Imperfect trilogy.

The End of Manners
Francesca Marciano

From a Crooked Rib
Nuruddin Farah

A Thousand Rooms of Dream and Fear
Atiq Rahimi

In Praise of Blood
Judi Rever

Refugees, Terror and Other Troubles with the Neighbors
Slavoj Zizek

The Gangster of Love
Jessica Hagedorn

How I Became a North Korean
Krys Lee