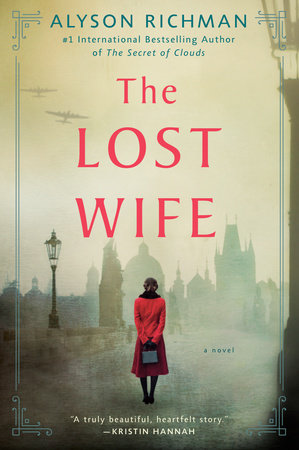 During the last moments of calm in prewar Prague, Lenka, a young art student, and Josef, who is studying medicine, fall in love. With the promise of a better future, they marry-only to have their dreams shattered by the imminent Nazi invasion. Like so many others, they are torn apart by the currents of war.

Now a successful obstetrician in America, Josef has never forgotten the wife he believes died in the war. But in the Nazi ghetto of Terezín, Lenka survived, relying on her skills as an artist and the memories of a husband she would never see again. Then, decades later and thousands of miles away, an unexpected encounter in New York leads to an inescapable glance of recognition, and the realization that providence has given Lenka and Josef one more chance.

From the glamorous ease of life in Prague before the occupation to the horrors of Nazi Europe, The Lost Wife explores the power of first love, the resilience of the human spirit, and our capacity to remember.

“Daringly constructed, this moving novel begins at the end and then, in a fully realized circle through the most traumatic event of the twentieth century, returns you there in a way that makes your heart leap. Richman writes with the clarify and softness of freshly fallen snow.” -Loring Mandel, two-time Emmy Award-winning screenwriter of Conspiracy

Alyson Richman is the author of The Mask Carver’s Son, Swedish Tango, and The Last Van Gogh. She lives in Long Island with her husband and two children.

Hemingway’s Girl
Back to Top