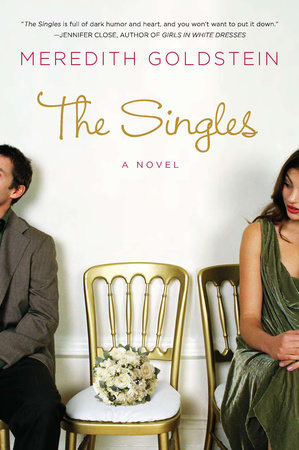 INTRODUCTION
Bee wanted the perfect wedding; she got the “Singles.”

Back in her single days-before she met the man of her dreams-Beth “Bee” Evans hated being forced to attend weddings solo. Determined to spare her friends the same humiliation, she invites everyone on her list with a guest. Much to her chagrin, however, Hannah, Vicki, Rob, Joe, and Nancy insist upon attending Bee’s lavish Chesapeake Bay nuptials alone. The frustrated bride dubs them the “Minus-Ones” and their collective decision wreaks unintended havoc on her otherwise perfectly planned wedding weekend.

One of today’s most popular relationship columnists, Meredith Goldstein, has penned a sparkling debut novel that chronicles the promises and disappointments of love and friendship with humor, compassion, and wisdom.

MEREDITH GOLDSTEIN is an advice columnist and entertainment reporter for The Boston Globe. In addition to “Love Letters,” she co-writes the paper’s society column, “Names.” She lives in Boston.

A CONVERSATION WITH MEREDITH GOLDSTEIN
Q. You’re the Love Letters columnist for The Boston Globe. How did that inform your writing? Were you able to use any situations you’ve advised people on in that capacity in the novel?

Despite the fact that I spend eight hours a day reading people’s dramatic love problems and advising them about what to do next, my column didn’t influence the book – at least not as much as I thought it would. I think that’s because I write Love Letters with my head on straight. In Love Letters, I’m the voice of reason. But when I stepped into the minds of my Singlescharacters, I could be irrational and erratic. I could be oversensitive and cruel. I tried to compartmentalize as much of my Love Letters brain as I could while I was writing the novel. I was Meredith Goldstein, the girl who’s been to (and flipped out at) dozens of weddings alone, as opposed to the Meredith Goldstein who always knows what’s best.

Q. Was it difficult for you to make the switch over to writing fiction since you’re a journalist by day? How was the process different for you? Do you prefer one to the other?

It was more challenging than I thought it would be. After writing about a third of my first draft of The Singles, I suddenly realized that my characters hadn’t spoken yet. I was afraid to make up dialogue, because in journalism you would absolutely never, under any circumstances, make up a quote. It took me a while to realize that I could make these characters speak, and that writing fiction allowed me to be a puppet master. And as it turns out, I love being a puppet master. I love being a journalist just as much, but this experience was wonderfully freeing.

A few major and minor characters are based on men who broke my heart, and I have to guess that they’ll know who they are when they read the book (assuming they do). As for my favorite characters, well, I love Rob, of course. He’s magnetic, and I have a weird, fictional crush on him (even though I’m allergic to dogs). But at the end of the day, I’m always thinking of Phil. It’s hard not to root for him.

Q. What are you working on next? Will we meet The Singles again?

I’m working on a book about love and science. That’s all I can say right now. And yes, we will absolutely see some of The Singles again. I can’t imagine letting them go.g


Learn More About The Singles
print

The Book of Jane

The Ballroom on Magnolia Street

The Repeat Year
Back to Top