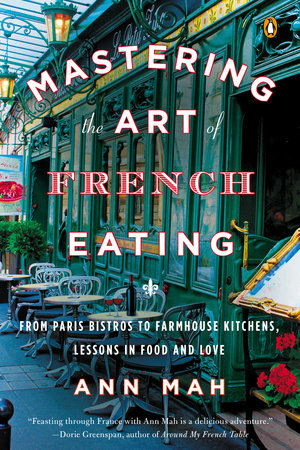 As a travel writer and a diplomat’s wife, Ann Mah has led a globetrotting life: moving from city to city every few years, learning languages, making new friends and leaving old ones behind. When her husband Calvin gets a three-year assignment in Paris, Ann can’t believe her luck; since childhood, she has dreamed of living in the City of Light. She adores French culture, the French language, and—most of all—French food, and together, Ann and Calvin plan an itinerary filled with charming cafés and sophisticated bistros. But just as they are settling into their new home, Calvin is assigned a last-minute, one-year post in Baghdad without her, and suddenly Ann is all alone in the most romantic city in the world.

Mastering the Art of French Eating is the story of Ann’s year on her own, combatting loneliness and exploring what it means to truly live and eat in France. Full of French recipes and sophisticated insider travel tips, this memoir is divided by region, with each area’s signature dish as the star of the chapter. Ann explores the dish’s history, cultural context, and technique, frequently guided by a colorful local expert, ending with the recipe and her own helpful notes. But Ann discusses more than simply food. Mastering the Art of French Eatingis also a moving exploration of identity, marriage, and independence. Ann faces the challenges of establishing herself socially and professionally alone in a foreign city, while simultaneously maintaining a long-distance relationship in the face of loneliness and anxiety. It’s a delicate, difficult balance, and though there is the occasional stumble, Ann’s love for her husband and for the unique life they have built together always shines through.

A warm and witty narrator, Ann happily shares both her setbacks and successes. Whether she’s sampling the peculiarly pungent andouillette sausage oreating her buckwheat crêpes with graisse saleé (a savorypreserved pork fat) like a Brittany native, she describes each experience with honesty and gusto. Ann champions French cuisine in its earthiest form—not the haute cuisine of food magazines, but the traditional dishes made by grandmothers, farmers, and local restaurateurs.

As the year draws to a close and Calvin is set to return home, Ann finds that her time alone in Paris has changed her. Her understanding of French culture and cuisine has been strengthened, but more important, so has her sense of self—what she is capable of, what she has accomplished, and what she wants to tackle next. Ultimately, the end of Mastering the Art of French Eatingis in fact a series of new beginnings—the purchase of an apartment in Paris, a post in Washington, D.C., and the possibility of parenthood—one can only hope that Ann will bring her readers along on her next adventure.

Ann Mah is a food and travel writer who has published work in the New York Times, Condé Nast Traveler, the International Herald Tribune, and other notable publications. In 2005, she was awarded a James Beard Foundation culinary scholarship to study in Bologna, Italy. Born in California, she currently divides her time between Paris and New York City.

A CONVERSATION WITH ANN MAH

1. You preface Mastering the Art of French Eating with a quote by Julia Child, and her spirit influences everything from the title of your book to the purchase of your apartment. In what ways did you find that you have a kinship with Julia Child?

I think those of us who love Julia are touched by her story for different reasons, whether you’re a late bloomer, kitchen unconfident, or professionally unsatisfied. For me, I was—and am—inspired by the graceful manner with which she faced the challenges of life as a trailing spouse. I look at the loving teamwork of her marriage with Paul Child—unwavering despite personal and professional disappointments, and untimely overseas relocations—the success that bloomed from hard work and sheer will, despite the upheavals of diplomatic life. And I feel hopeful.

2. Your memoir ends with you and Calvin on the cusp of a new life. How have things changed for you since your wrote the book?

We move so often, at this point, relocating to another city has really become the status quo! Currently, we’re delighted to find ourselves in New York again, for a few years. And our biggest new adventure is that we recently welcomed a daughter. She already loves French cheese!

3. You took an intensive French course prior to moving to Paris and you mention both your anxiety and pride in speaking French with locals. Have you discovered any interesting French slang or colloquial expressions during these conversations?

4. During your time in France, you delved into the history of the signature dishes of many different regions. How did you research the histories of these dishes?

Traveling and eating the dishes in their region of origin was the most useful (and fun) part of the research. I also visited local museums, collected local cookbooks, chatted with many home cooks and professional chefs, and asked a lot of questions.

5. Beyond the delicious recipes and an education in French culture, what do you hope readers will gain from your book?

I hope readers feel encouraged to travel and explore, to ask lots of questions, to embrace their curiosity, and to be flexible and open to new experiences—even when it means tucking into tripe sausage!

6. Do you have any favorite French dishes that didn’t make it into the book?

Oh, yes, too many to count! Especially desserts. Every time I tell a French person about my book, they want to know if I featured the classic dish from their region. If the answer is no, I’m always a little embarrassed. And of course I still joke that I could write a book about the least known dishes in French cuisine.

7. What is the most common misperception that the French have about Americans, and vice-versa?

France and the United States have a long history of mutual admiration and envy. I hesitate to generalize the two countries, even the misperceptions we have about one another. That being said, I continue to struggle against the French belief that Americans—“les vrais américains”—are Caucasian. And vice versa. Immigration has made both nations rich in diversity.

8. Knowing what you know now, what one piece of advice do you wish you could have given yourself before embarking on your year alone in Paris?

In the beginning, I felt awkward traveling alone—especially dining alone in restaurants, when it felt like everyone was staring at me. But after the first few trips, I started to enjoy being on my own, creating my own schedule, eating when I felt hungry, and dropping everything to, say, hunt down an obscure buckwheat farmer.

9. You’ve had a varied writing career—food and travel articles, fiction, and now memoir. Which is the most challenging?

For me, the most challenging part of writing—any form of writing—is the rejection. Every time I publish a new article or book, I feel extremely lucky. I still hear the word “no” about ninety percent of the time. You have to have a really thick skin.

10. What are you currently working on?

I’m writing a novel set in Paris and the vineyards of Burgundy—it’s a love story with a secret buried at the heart of a family wine cellar. I’m enjoying every drop of the wine research!


Learn More About Mastering the Art of French Eating
print

The Sharper Your Knife, the Less You Cry
Kathleen Flinn

Life, on the Line
Nick Kokonas and Grant Achatz

What She Ate
Laura Shapiro

Comfort Me with Apples
Ruth Reichl

My Life in France
Julia Child and Alex Prud’homme

See You in the Piazza
Frances Mayes

Coming to My Senses
Alice Waters

An Embarrassment of Mangoes
Ann Vanderhoof

Waking Up in Paris
Sonia Choquette

Remembrance of Things Paris
Gourmet Magazine Editors
Back to Top