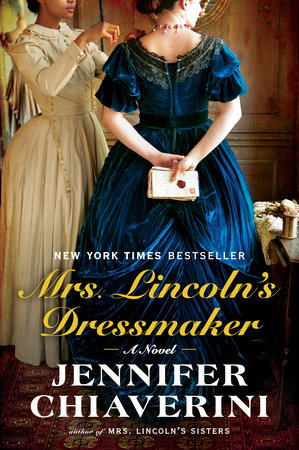 INTRODUCTION
In a life that spanned nearly a century and witnessed some of the most momentous events in American history, Elizabeth Hobbs Keckley was born a slave. A gifted seamstress, she earned her freedom by the skill of her needle, and won the friendship of First Lady Mary Todd Lincoln by her devotion. A sweeping historical novel, Mrs. Lincoln’s Dressmaker illuminates the extraordinary relationship the two women shared, beginning in the hallowed halls of the White House during the trials of the Civil War and enduring almost, but not quite, to the end of Mrs. Lincoln’s days.

Jennifer Chiaverini is the author of the New York Times bestselling Elm Creek Quilts series, as well as five collections of quilt projects inspired by the novels. Mrs. Lincoln’s Dressmaker is her first stand–alone historical novel. A graduate of the University of Notre Dame and the University of Chicago, she lives with her husband and two sons in Madison, Wisconsin.

What drew you to write about Elizabeth Keckley?

More than a decade ago, I was researching antebellum and Civil War era quilts for my fourth novel when I discovered a photograph of an antique masterpiece. Arranged in the medallion style, with appliquéd eagles, embroidered flowers, pieced hexagons, and deep red fringe, the quilt was clearly the work of a gifted seamstress, its striking beauty unmarred by the shattered silk and broken threads that gave evidence to its age. The caption noted that the quilt had been sewn from scraps of Mary Todd Lincoln’s gowns by her dressmaker and confidante, a former slave named Elizabeth Keckley. I marveled at the compelling story those brief lines suggested—a courageous woman’s rise from slavery to freedom, an improbable friendship that ignored the era’s sharp distinctions of class and race, the confidences shared between a loyal dressmaker and a controversial, divisive First Lady. I wished that I could have been present as Elizabeth Keckley measured Mary Lincoln for a new gown, to overhear their conversations on topics significant and ordinary, and to observe the Lincoln White House from such an intimate perspective. From that moment, my interest in their remarkable friendship was captivated, and it really never waned.

After her interview with the journalist, Mr. Smith D. Fry, Elizabeth worries that he will fill in the gaps and silences with his own imagination, distorting her story to suit his purposes. “Why should one write the story to fit the facts, she thought wryly, when nothing could be easier than to invent one’s own facts to suit a more provocative story?” [p. 349]. One of the challenges of writing historical fiction is to navigate the dual demands of staying true to the facts but also shaping them into a satisfying story. What was the allure of telling Elizabeth Keckley’s story as a novel rather than nonfiction?

After I finished reading Keckley’s memoir, Behind the Scenes, I wanted to delve more deeply into her history, to learn about the woman she was beyond her friendship with Mary Lincoln—to discover what had happened after the closing passages of her memoir, and to uncover the details of everyday life in wartime Washington she had omitted. How had Elizabeth Keckely spent that tense and fateful day when the increasingly divided nation awaited the results of the election that would send Abraham Lincoln to the White House? What emotions had swept through her when the Confederate Army advanced upon the city and invasion seemed imminent? What sights, sounds, and smells had she encountered every day as she walked from her boardinghouse to the White House, while all around her the capital became first an armed camp, and then one vast military hospital? What inspired her to make her beautiful quilt, when did she make it, and for whom? And perhaps because I am a writer, one question more than any other would not let me rest: How had the publication of her memoir—still in print today and acclaimed by historians for the invaluable insights it provides into the Lincoln White House—transformed her? Fiction allowed me to explore possible answers to those questions in a way nonfiction could not.

Elizabeth Keckley was a woman of remarkable strength, courage, perseverance, and dignity. She was exceptionally talented, but also very diligent and ambitious, and together those qualities enabled her to deliver herself from slavery and become a successful businesswoman. In their written reflections, people who knew her during her lifetime refer admiringly to her natural grace and dignity, her integrity, her lovely speaking voice, and her beauty. As for her relationship with Mary Lincoln, for as long as their friendship endured, it was, for the most part, mutually beneficial, strengthened by shared experiences and tragedies. Mary Lincoln provided Elizabeth Keckley with opportunities for social and economic advancement she probably had never imagined during her years as a slave, while Elizabeth offered Mary the loyal, steadfast friendship she craved but had always found so elusive.

President Lincoln is often characterized by his calm, thoughtful, and wise demeanor. The same, however, can’t be said for Mrs. Lincoln. In Mrs. Lincoln’s Dressmaker, you paint a picture of a complex, yet fascinating woman with mood swings and emotional outbursts but who also possesses a strong and confident presence. Can you describe your insights on her character? Why is she such an intriguing person, not just in your book but also in history?

Despite the volumes of historical and psychological research devoted to Mary Lincoln, she remains an enigma. She was the first wife of a U. S. president to be called First Lady, and she was then and remains to this day one of the most controversial. Regrettably, descriptions of her tend to fall into the extremes of caricature: She is either portrayed as an unstable, shrill, vicious, corrupt shrew who made President Lincoln utterly miserable, or as a devoted wife and mother and a brilliant, shrewd, political partner whose reputation was savaged by biased male historians. As a friend and confidante who observed Mary Lincoln closely in moments of triumph as well as tragedy, Elizabeth Keckley knew her as a real woman, full of flaws and virtues and surprises like any other. It was this far more nuanced woman that Elizabeth Keckley depicted in the pages of her memoir, and since Elizabeth Keckley is my narrator, I shaped the character of Mary Lincoln according to her perceptions.

Elizabeth Keckley’s story was largely lost to history, yet it has recently been restored, through efforts to restore her gravesite, and now your novel. What do you regard as her legacy?

Certainly her writing is a significant part of her legacy. Despite the vitriol of her critics and Robert Lincoln’s efforts to rid the world of Behind the Scenes, Elizabeth Keckley’s memoir, so denounced in its time, is today respected for its invaluable insights into the Lincoln White House. The influence she had upon President Lincoln—not in any official role of advisor, but rather through her presence and conversation, making him better aware of the needs of the African–American community—and how it might have informed his opinions and thus guided his policy decisions is another. Another part of her legacy—perhaps impossible to measure—springs from her role as a teacher, not only in her later years, when she worked as a domestic arts instructor at Wilberforce University, but also and especially when she taught sewing, reading, and other important skills to the former slaves living in Washington’s overcrowded refugee camps. She helped countless numbers of women gain the skills and knowledge they needed to build better lives for themselves and their families in the new world of freedom.

What is your next work of fiction? Can readers expect to meet another remarkable figure from America’s past?

My next novel, The Spymistress (Dutton, October 2013), will explore the suspenseful life and clandestine adventures of Elizabeth Van Lew, a Union loyalist who was General Grant’s most valuable spy in her native Richmond, Virginia, during the tumultuous years of the Civil War.

Alice I Have Been
Melanie Benjamin