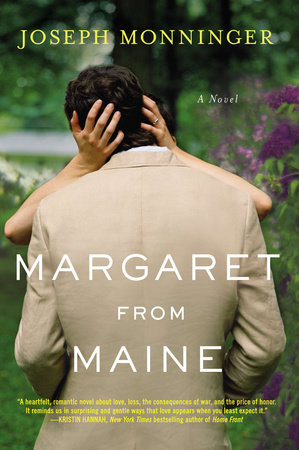 Brought together by war, separated by duty, a love story for the ages

Margaret Kennedy lives on a dairy farm in rural Maine. Her husband Thomas—injured in a war overseas—will never be the man he was. When the President signs a bill in support of wounded veterans, Margaret is invited to the nation’s capital. Charlie King, a handsome Foreign Service officer, volunteers to escort her. As the rhododendron blossoms along the Blue Ridge Highway, the unlikely pair fall in love—but Margaret cannot ignore the tug of her marriage vows.

Joseph Monninger’s Margaret from Maine is a page-turning romance that poignantly explores the dilemmas faced by those who serve our country—and the men and women who love them.

Joseph Monninger is the author of Eternal on the Water and The End of the World as We Know It, as well as several award–winning young adult novels. A professor of English literature, he lives in Warren, New Hampshire.

A CONVERSATION WITH ALEXANDRA FULLER

Q. What inspired you to write Margaret’s story? Did you have most of the plot in mind when you began to write?

I didn’t have the plot, honestly. I had the idea of the first scene…when Margaret’s husband is shot. I wanted to have a character placed under pressure. That’s always my starting point. Margaret is a good woman in an impossible situation. After the initial set-up, I ask myself, well, what will happen next? Once I have the character in mind, I ask the usual questions: does she have children, where does she live, what does she think about her life? Once I have those settled, I can move into the story.

Q. Are you ever surprised by the way your characters develop while you’re writing? Or do you have a very firm idea of who they are as people before you begin? Were there any in particular who turned out a little differently than you might have imagined at first in Margaret?

I’m not sure he turned out differently from what I imagined, but Margaret’s son, Gordon, became fuller as the novel progressed. It was interesting to write from a little boy’s perspective. I’ve been that boy with a toy soldier in his hand. His life became richer as I listened to him, and that was rewarding. Writers often have little scenes that — while not immensely important to the novel — please them in their construction or cadence. The scene near the end of the novel when Gordon is shooting hoops on a court just at sundown is a scene I like a great deal. I like his granddad appearing, and I like the sound I created — or remembered — that a basketball makes as it goes through a metal chain on a playground basketball goal. The character seemed real to me at that moment.

Q. Aside from being an author, you also teach creative writing. What one piece of advice would you give to all of the budding novelists out there?

Depends a little on what you hope to write. A short story is different from a novel, obviously. But a sense of honesty is key in almost any form of writing. A writer friend of mine once said our biggest obstacle to good writing is letting ourselves off the hook to say, well, next time I’ll do it better. It’s much harder to say: I’m giving it everything I’ve got this time, right now, and if it isn’t up to standard, well, that’s my fault. Honesty in the writer creates honesty in the novel.

I’m working on another story — again set in Maine — about a woman and a man and a boy who has been injured. I don’t want to give too much away, but it includes flyfishing and summer sounds. It’s set on a lake in Maine. It’s a novel about second chances, really, and about learning to trust. The working title is The Great Summer or The Day After You, but I’m not sure if either title will stick. I’m about half finished with it and I like it a good deal.

Letter to My Daughter
George Bishop

That Faith, That Trust, That Love
Jamellah Ellis

The Prince of Nantucket
Jan Goldstein

A Slender Thread
Katharine Davis
Back to Top