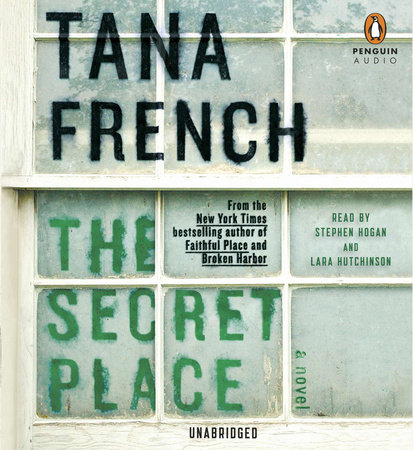 Stephen Moran is a young, ambitious detective stuck on the Cold Case Squad, chasing after leads that go nowhere. He has his sights set on the Murder squad, but no way to get there—until teenage Holly Mackey walks into his office with a tantalizing clue to a high-profile murder case.

A year ago, sixteen-year-old Chris Harper was found dead on the grounds of St. Kilda’s, a prestigious girls’ school on the outskirts of Dublin. His killer was never found. Now a photo of Chris has appeared on St. Kilda’s Secret Place, a board where the students can pin up their secrets anonymously. The caption accompanying the photo says I know who killed him.

To find the killer—and get his chance to join the Murder squad—Moran must work with the original detective on the case, Antoinette Conway. Conway is tough, abrasive, and disliked by everyone in the department; she dislikes everyone in return, including Moran, and is still angry about how she mishandled the investigation the first time around. Both Moran and Conway need to solve this case quickly, for more reasons than just bringing the killer to justice.

As the Harper case unravels, Conway and Moran pick apart the truth from the lies deep at the heart of St. Kilda’s sprawling grounds and ancient walls. Soon they have narrowed their suspects to two separate cliques of four girls; each group hates the other, and all the girls have ties to Chris Harper. What’s worse, the list includes Holly herself, the daughter of the ruthless Detective Frank Mackey; Mackey’s been kind to Moran in the past, but he’ll do whatever it takes to protect his child. And Moran and Conway are discovering that when the secret world of teenagers spins out of control, it can be more mysterious and more dangerous than they ever imagined.

1. What part of the author’s portrayal of adolescence rang the truest with your own experience? Of all the teenagers in the novel, which reminded you most of yourself at the age?

3. Detective Mackey’s sharp eye for human behavior is matched only by his determination to protect Holly. He warns Conway that Moran is ambitious, even to the point of disloyalty. Is this true?

4. Similarly, Mackey explains to Moran why Conway is so disliked by the Murder Squad. Do you believe his reasoning or is he trying to play on Moran’s fears? If you were Conway, how would you have reacted to the other detectives’ behavior?

5. There are episodes of the supernatural throughout the novel. Do you believe that Holly and her friends had magical powers? Did the students actually see Chris’s ghost? What was the dark shape that Moran noticed through the doorway?

6. The title refers to the St. Kilda’s board where the girls post their secrets, but in what other ways could it be interpreted?

7. The book’s chapters alternate between Moran and Conway’s experience solving the crime and the events leading up to the crime itself. How did this double narrative heighten your experience as a reader?

8. Moran admits, “I love beautiful; always have. I never saw why I should hate what I wish I had” (p. 31). What does he mean? Does this affect his work on the case?

9. French presents the relationship between Selena and Chris so that any of her friends’ differing perspectives on his feelings are plausible. What do Selena, Julia, Holly, and Becca each believe? Who do you agree with?

10. Would Chris Harper’s murder case have been handled differently if it had occurred in a poor Dublin neighborhood?

11. French writes that “when Holly thinks about it a long time afterwards, when things are starting to stay fixed and come into focus at last, she will think that probably there are ways you could say Marcus Wiley killed Chris Harper” (p. 95). What does she mean?

Born in Vermont, Tana French grew up in Ireland, Italy, the United States, and Malawi, and has lived in Dublin since 1990. She trained as a professional actress at Trinity College, Dublin, and has worked in theater and film. Her debut novel, In the Woods, was honored with the Edgar, Barry, Macavity, and Anthony awards, and her previous novel, Broken Harbor, won the Los Angeles Times Book Prize for Best Mystery/Thriller and the Irish Book Award for Crime Fiction Book of the Year. She lives in Dublin with her family.
Learn More About The Secret Place
print

The Absent One
Jussi Adler-Olsen

A Banquet of Consequences
Elizabeth George

The Purity of Vengeance
Jussi Adler-Olsen

A Conspiracy of Faith
Jussi Adler-Olsen

The Girl Who Takes an Eye for an Eye
David Lagercrantz

The Couple Next Door
Shari Lapena
Back to Top