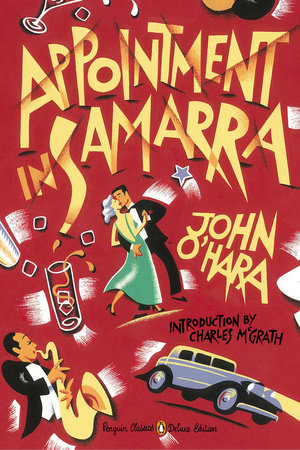 Thirty years old, college educated, and the son of a doctor, Julian English, the protagonist of John O’Hara’s classic novelAppointment in Samarra, appears to have life going his way. He owns a house on Lantenengo Street, the most prestigious boulevard in all of Gibbsville, Pennsylvania. His wife Caroline is “the most attractive of the Lantenengo Street girls” (p. 110). Despite the recent onset of the Great Depression, his Cadillac dealership appears to be holding its own. Even Al Grecco, the small-time hood who runs liquor for the local crime boss Ed Charney, knows it’s true: “Julian English . . . was a high class guy and would be a high class guy in any crowd” (p. 17). As he celebrates Christmas Eve 1930 with the town’s in-crowd at the Lantenengo Country Club, Julian would seem to have every reason to be just as self-satisfied as his socially established clubmates Froggy Ogden and Harry Reilly. But before this evening is over, to his surprise as much as anyone else’s, Julian will have impulsively thrown a drink into Reilly’s face, the first act of Julian’s rapid downward spiral into social disgrace and self-destruction.

Julian himself only dimly grasps the reasons for his suddenly erratic behavior, and everyone around him is shocked and puzzled. Only as author John O’Hara gradually and deftly reveals the conditions of life in English’s outwardly prosperous but inwardly decaying town does the reader begin to understand why Julian feels as though he must act as he does. Desperate for the acceptance that his social circle dispenses only at the price of numbing conformity, but at the same time unwilling to forfeit his individuality, Julian feels trapped. Conscious of the approach of middle age, he fears the attention that both richer and younger men are devoting to his wife. As he wanders from meaningless party to meaningless party, Julian also feels the tightening grip of boredom, and he feels within himself a dull, creeping rot from which the only escapes appear to lie in alcohol and reflexive rebellion. As Julian’s friends scratch their heads and gossip, and as Caroline wonders what is happening to the man she loves, Julian continues almost willfully to unravel, both engaging and repelling the reader’s sympathies at every downward turn. As O’Hara’s taut and gritty narrative nears its shattering climax, one feels sorrow, not only for Julian and his family, but for an American dream turned foul, a society gone blind, and a vision of happiness no longer credible or appealing.

Stark in its language and atmosphere, unerring in its dissections of human character, Appointment in Samarra ranks with the best of Theodore Dreiser in its naturalist depictions of human decline and rivals Sinclair Lewis in its denunciations of small-town egotism and bigotry. Not without reason did the Modern Library choose the book as one of the twenty-five greatest English-language novels of the last century, and not without reason do readers continue to relish its every page.

John O’Hara was born in Pottsville, Pennsylvania, in 1905 and graduated from Niagara Preparatory School in Lewiston, New York. His father’s death and resulting financial hardship prevented him from realizing his dream of attending Yale. O’Hara turned instead to writing, first supporting himself by writing for local newspapers and then moving to New York to pursue a career in fiction. He became an astonishingly prolific writer of short stories, many of them set in Gibbsville, Pennsylvania, a barely disguised fictionalization of Pottsville. O’Hara’s short stories published in The New Yorker alone eventually numbered more than two hundred. His novels also won success, especially when adapted to other media. BUtterfield 8 became an Oscar-winning film, and Pal Joey found a prosperous second life as a Broadway musical. O’Hara received the National Book Award for Ten North Frederick and his début novel, Appointment in Samarra, was named by the Modern Library as one of the twenty-five greatest English-language novels of the twentieth century. He died in Princeton, New Jersey, in 1970.

When She Was Good
Back to Top