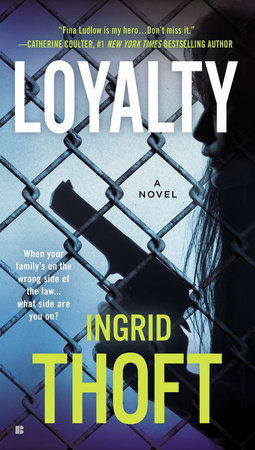 The Ludlows are a family of fast-talking Boston lawyers, and patriarch Carl Ludlow treats his offspring like employees—which they are. Black-sheep daughter, Fina, dropped out of law school, but her father keeps her in the fold as the firm’s private investigator, working alongside her brothers.

Juggling family, business, cops and crooks is no problem for Fina. But when her sister-in-law disappears, she’s caught up in a case unlike any she’s encountered before.

Carl wants things resolved without police, but the deeper Fina digs, the more impossible that seems. As she unearths more dirt, the demands of family loyalty intensify. But she is after the truth—no matter where it lies…

Ingrid Thoft was born in Boston and is a graduate of Wellesley College. Her interest in the PI life and her desire to create a believable PI character led her to the certificate program in private investigation at the University of Washington. She lives in Seattle with her husband. Loyalty is her first novel.

Learn More About Loyalty
print
Back to Top