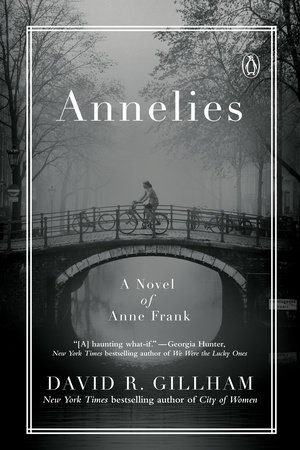 An Introduction to Annelies

Annelies is a powerful and deeply humane novel that asks the question: What if Anne Frank survived the Holocaust?

It’s 1945, and the war is over. Anne Frank is sixteen years old and has survived the concentration camps. But with her survival comes a host of new challenges, and her struggle is far from over. As she reunites with her beloved father, Pim, in newly liberated Amsterdam, she finds that returning to her life is more difficult than she could have possibly imagined.

Anne has lost her mother, her sister, and the beloved diary that housed her dreams during her years in hiding. As she and Pim attempt to piece their lives back together, she finds that she has lost herself as well. Gone is the lively, curious child who dreamed of becoming a writer. In her place is a woman haunted by the horrors she’s experienced, and most painfully by the memory of her sister, Margot. While her father works to build a new life after loss, Anne is adrift.

But as the people of Europe begin the slow process of rebuilding after the war, Anne finds herself once more accessing the hope that inspired her in the Secret Annex and uses her writing to amplify the voices of the lost, in the hope that they may never be forgotten.

In Annelies, Gillham has created a powerful narrative of what might have been. Anne Frank’s words have become a beacon of hope amid tragedy, and she has come to represent the senseless horror of the Holocaust. Gillham’s lyrical prose gives life not only to the icon but to the human being, as she grows from adolescent to woman in the wake of tragedy and rediscovers hope.

1. In Annelies, Anne and her father, Pim, often have a thorny relationship as they cope with the trauma of surviving the war in different ways. How would you describe their different approaches in attempting to rebuild their lives?

2. Perhaps the most famous passage in Anne Frank’s diary concerns her belief that people are basically good at their core. How do you think the novel Annelies addresses this? Does the fictional character Anne believe this to be true, even after her horrific experiences in the camp?

3. The relationship between the character Anne and the boy Raaf is fraught with contradictions and danger. Why do you think Anne propelled herself into this relationship?

4. How do you think the Jewish concept of tikkun olam—“repairing the world” and taking moral responsibility for the welfare of others as well as one’s own—helped Anne repair herself?

5. Anne feels a tremendous amount of guilt surrounding the death of her sister, Margot. Do you think her guilt is warranted? How well do you think the character Anne resolves her feelings of guilt by the end of the novel?

6. The real Anne Frank has become an international symbol of the loss perpetrated by the Holocaust, and a powerful voice of hope through her diary. In what ways has she become mythologized? Did reading Annelies change the way you thought about her?

7. Annelies focuses on how anti-Semitism was still very present in Europe despite the fall of the Nazi regime and the liberation of the camps. Did that surprise you? How is this aspect different from other World War II novels?

8. When you first picked up this book reimagining Anne Frank as having survived the Holocaust, what did you think of that starting place? Did your opinion change after finishing the book?

9. At the end of the book, the author includes a list of fictional letters from readers responding to The Diary of a Young Girl. How did you think the young letter writers in the book experienced Anne’s diary differently than we do?

10. This novel is based on real people and events. Did knowing that transform your reading experience? Do you read differently when characters are purely fictional?

I Am the Clay
Chaim Potok
Back to Top