Until She Comes Home Reader’s Guide 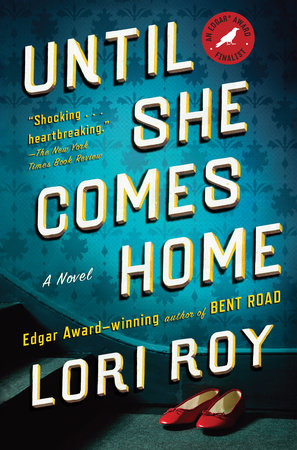 Until She Comes Home Reader’s Guide

Lori Roy follows her Edgar® Award-winning debut novel, Bent Road, with a spellbinding tale of suspense set against the crumbling façade of a once-respectable Detroit neighborhood in 1958.

The ladies of Alder Avenue—Grace, Julia, and Malina—struggle to care for one another amidst a city ripe with conflict, but life erupts when child-like Elizabeth disappears. A black woman was recently murdered at the factory where their husbands work, and the ladies fear that crime may foretell Elizabeth’s fate. When an unmistakable sound rings out, will the vicious secrets that bind them all be revealed?

Lori Roy lives with her family in west central Florida. She is the author of the Edgar®-Award winning novel Bent Road.

A CONVERSATION WITH LORI ROY

1. Until She Comes Home is set during a particularly tumultuous moment in Detroit’s history. Can you discuss the research you did in preparation for the writing process? What aspects of the novel—if any—are grounded in fact?

I initially researched this era and Detroit as I was writing my first novel, Bent Road, and while little of the research ended up being used in that book, I knew immediately it was a city and a time I would be revisiting.

Beyond reading various non-fiction accounts of the culture, economy and politics of the country and Detroit during the fifties, I studied newspaper articles, interviewed people who had lived in Detroit during that time, and read many great authors who were writing during and about the 1950s. These sources helped me develop an understanding of the larger picture of life, but in order to gain a more intimate understanding, I turned to catalogs and cookbooks published in the late 1950s.

One of my favorite finds was a vintage cookbook published in 1958. Aromas and Flavors of Past and Present was written by Alice B. Toklas. Poppy Cannon contributed the book’s introduction and in it, she wrote of a time when women had less support in the home as they worked to raise their families, of the disappearance of the friendly grocer and of extended families that lived farther and farther away. She wrote of modern technology that was supposed to free women but instead meant only that more and more was expected of them. She wrote of an overwhelming influx of information from radio, television, newspaper, advertising and its stresses on the modern woman. This passage, while written over fifty years ago, spoke directly to many of the same frustrations and struggles women face today. This was certainly my most helpful discovery because it aided with my confidence as I wrote about a time when I was not yet born.

After having combed through this research, I settled on being true to the main landmarks of Detroit and to the social and economic climate of the time. Woodward Avenue, for example, is the main artery running through the city, and I built the world in Until She Comes Home around it. Additionally, the social concerns of the time, the housing shortages, the practice of block busting, are all examples of issues that arise in the novel and are rooted in history. The details of the plot, however, the characters, and the streets and locations where the characters spend most of their time are all fictional.

2. The novel discusses issues of race and gender rather provocatively. Was it challenging to write from the perspective of characters that are immersed in a different—and at times, morally reprehensible—social and political moment?

This is certainly the most difficult part of writing any novel—writing from the perspective of a character who does bad things. Figuring out “who done it,” and more importantly why, is imperative when attempting to craft a plot that will read as surprising and yet inevitable. To write with confidence, I must understand the motivations of all my characters, including characters who act in ways that are morally, legally and/or socially unacceptable. In order to accomplish this and ultimately gain some comfort with writing from the perspective of a misguided character, I continually remind myself that people act in ways they feel are proper or, at the very least, justified. With this constantly in mind, I dig further into my characters’ lives to understand their circumstances, their desires, their struggles, and in doing so, I can understand why they feel justified to act as they do.

3. What other time periods or locations intrigue you? And what’s next?

Setting is the first choice I make when writing a novel. From setting, my characters emerge, the plot points, the themes. And I tend to favor a setting that is harsh in some way and will act to challenge my characters. The time period is my next choice. To date, all of my novels have been set in the past, and I’m often asked why. I was well into writing Until She Comes Home before I fully understood the answer. There is something quite poignant about writing a story set in the past and realizing the struggles, desires and temptations of that era are not so different from those that challenge people today.

I’m excited to have recently finished a novel set in northeastern Kentucky and loosely inspired by the last public hanging conducted in the United States. The novel, She Lies In Wait, follows two storylines separated by sixteen years. The first, set in the mid-thirties, introduces Juna Crowley who, to preserve her place in the household and avoid a marriage she does not want, will see to it one last man is publically hanged. The other story follows fifteen-year-old Annie Holleran. Annie, the keeper of her Grandmother’s know-how, lives with her family on a lavender farm where she fears she will forever stand in the shadow of her prettier, kinder, smarter sister. When the two storylines collide, Annie exposes the truth behind the hanging that tore her family apart almost twenty years before and that threatens them still.


Learn More About Until She Comes Home
print

The Two Deaths of Daniel Hayes

The Watcher in the Wall

Dark Prophecy
Back to Top