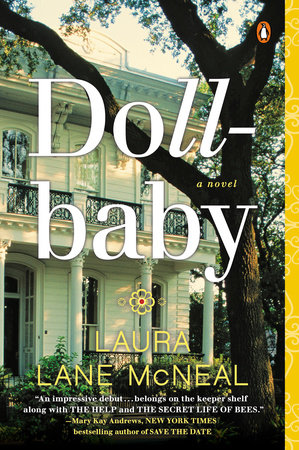 It’s the summer of 1964 and eleven-year-old Ibby has just lost her father in a freak bicycle accident. Undone by the whole ordeal, Ibby’s mother Vidrine unceremoniously dumps Ibby, along with an urn of her father’s ashes, at the New Orleans home of Ibby’s paternal grandmother, Fannie. The big old house with its boarded-up bedrooms, Victorian embellishments and strange food are odd enough to a little girl who’s grown up in the state of Washington. Then there’s the grandmother she never knew she had: Fannie is a volatile woman who runs a betting ring on her back porch, has a history of asylum stays, and a mysterious past that Ibby has been forbidden to question.

But soon, Fannie’s black cook Queenie, and her daughter Dollbaby, help Ibby orient herself to her new surroundings, welcoming her into the fold with delicious Creole meals, handmade clothes, and plenty of seasoned advice about dealing with her unpredictable grandmother. Fannie, for her part, quickly takes to her new role as a grandmother, pampering Ibby with her very own perfume, a birthday lunch at historic Antoine’s, and a sense of family legacies. Though at first Ibby bristles at Fannie’s old-fashioned ideas like party dresses and gloves, she eventually warms to Fannie and realizes that beneath her eccentric and impulsive manner,, Fannie has a real heart. As Fannie’s tragic personal history comes to light, Ibby begins to see her own family history more clearly, finding new appreciation for Fannie’s role in her life. What was supposed to be only a temporary stay evolves into a more permanent, although tentative, arrangement as both Fanny and Ibby discover the ties that bind them together.

Meanwhile, the Civil Rights movement is stirring up New Orleans. Everyone seems to be taking sides, and not even Dollbaby and Queenie agree on the direction the country is headed under President Lyndon Johnson’s new law. If that’s not enough, Ibby’s growing friendship with Dollbaby’s daughter, Birdelia, makes Ibby a target for racist neighbors.

Still, there’s an ache in her heart for all she’s lost—her beloved father, and a mother who left her for a visit, then disappeared without a trace. As she wonders whether her mother will ever come back for her, Ibby must decide if chasing the past will give her what’s she looking for, or if this new crazy quilt of a family is where her heart truly belongs.

Laura Lane McNeal’s vividly drawn characters, caught in the vortex of cultural change, are as bold and charming as New Orleans itself.

1. Ibby’s arrival to Fannie’s home is the catalyst for change. How does Ibby transform the household?

2. Ibby is warned early on not to ask Fannie about her past. Why is she given this advice?

3. Why does Vidrine leave Ibby with Fannie? Later, after four years, why does Vidrine suddenly come back and what does she wish to achieve from the visit?

4. As Ibby lives in Fannie’s house, she begins to uncover its hidden truths, both physically and emotionally. What secrets does the house hide, and what do they mean to her?

5. In some ways Fannie is very old-fashioned, yet in other ways she seems quite progressive for someone of her era. How would you characterize her, and why?

6. Dollbaby wants to participate in the civil rights protests but Queenie tries to discourage her. What is the difference between their views on the issue and why do you think they differ?

7. As the era unfolds, what are its political effects on Fannie’s household? How do the realities of race and class trickle down to affect the characters’ lives?

8. Fannie tells Ibby that she must be “willing to live the life that is waiting for you.” What does she mean by this, and how does the advice relate to both of their lives?

9. Through this novel McNeal seems to suggest that family is what we make it. How does Ibby’s adopted family influence the person she ultimately becomes?

Laura Lane McNeal worked in advertising in New York and Dallas before returning to her hometown of New Orleans to start her own consulting firm. After Hurricane Katrina’s devastation in 2005, she seized the opportunity to fulfill her lifelong dream of becoming a writer. Dollbaby is her first novel.
Learn More About Dollbaby
print

The Funeral Dress
Susan Gregg Gilmore
Back to Top