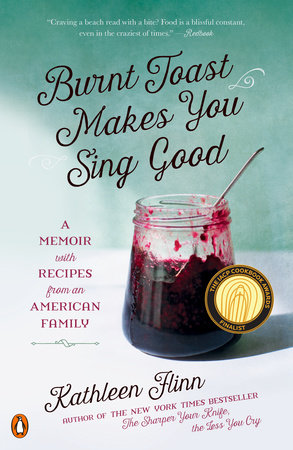 “I don’t have to tell you I love you. I fed you pancakes.”

Kathleen Flinn offers this quote from her grandmother, Inez Monk Henderson, in the opening pages of her remarkable multi-generational memoir Burnt Toast Makes You Sing Good. Grandma Inez is also behind the line that shapes the book’s title (a phrase she used when trying to get a picky eater to eat). Both set the tone for this touching and hilarious—and at times heartbreaking—story of history, family, love, laughter, and of course, food, from the author of The Sharper Your Knife the Less You Cry.

“I’m a direct descendant of scrubwomen, a circus worker, a midwife, a bootlegger, a bigamist, an autoworker, and a cop. The most notable thing? That so many of my ancestors cooked, either for a living or as their passion,” notes Flinn in the introduction (p. 2). It’s no wonder Flinn, who moved to Paris to train at Le Cordon Bleu cooking school, found such fulfillment and passion in food with a background like hers. Flinn comes from a tight-knit, Midwestern family, and Burnt Toast spans three generations of it—from her maternal and paternal grandparents to her besotted parents (deeply in love and sometimes impulsive) to Flinn herself and her motley group of siblings. Throughout, Flinn discusses the integral role food played in their lives, sharing wonderful anecdotes of meals they shared and beloved family recipes, included at the end of each chapter. Readers will feel like a part of Flinn’s family as they race to their own kitchens to recreate these mouth-watering foods.

Flinn’s parents began a charming courtship in Michigan in the 1950s before moving to San Francisco in 1958, where they helped her Uncle Clyde run a pizza place (at that time, a rarity). From there, readers follow the Flinn family to a farm in Davison, Michigan, where they take root and raise chickens, and then to Anna Maria Island, Florida, where they find themselves a second home. Flinn’s comedic timing is spot-on as she writes scenes from her childhood, such as the tale of her mother accidentally locking herself in the chicken coop and fearing for her life as the rooster approached. These anecdotes mingle with sadder stories, such as that of an uncle shattered by war and her paternal grandfather who abandoned his family. Through it all, Flinn shows the way food brings a family together, whether it’s a shared meal, a favorite recipe passed down through several generations, or a way of socializing in a new community.

Written with Kathleen Flinn’s signature wit and warmth, Burnt Toast Will Make You Sing Good is an incredibly satisfying read—though some may want seconds.

1. Burnt Toast Makes You Sing Good is a “memoir of food and love from an American Midwest family.” In what ways does food tie families together and carry on tradition? Was food a big part of your family growing up, or in your own family now?

2. Why do you think memoirs, and memoirs about food, are so popular? Discuss some of your favorites.

3. The Flinn family struggled financially in their early years. In order to celebrate birthdays properly (and on a budget), Kathleen’s mother would give each child a “Birthday Menu,” making whatever meal they requested. Did your family have any similar traditions that didn’t break the bank, but meant something special?

4. How much do you know of your own ancestry? Did reading this memoir make you wonder about your own background and how it might have shaped who you are today?

5. Kathleen Flinn interviewed her mother and other family members, and conducted extensive research to write this memoir. Was she successful in bringing the past to life on the page? In what ways? Who were your favorite “characters”?

6. How do you think Flinn’s family and background served her well in becoming a writer, and how have they informed her passion for food?

7. Flinn’s father was a military man, and honor was a guiding principle of his life. In what way did his honor influence certain decisions for him and his family? What other values were important to the Flinn parents that they tried to instill in their children?

8. The book is full of hilarious family anecdotes, from the origin of the title to Flinn’s mother accidentally locking herself in the chicken coop. Did any of these stories stand out more than others? Why? What lessons did some of these stories teach?

9. History plays an important role through generations of the author’s family—the Great Depression, the reliance of many family members on employment at large automobile factories in the Midwest, and wars that members of Flinn’s family fought in. How do these big events shape them on a personal level?

Kathleen Flinn is the author of the New York Times bestseller The Sharper Your Knife, the Less You Cry, a memoir with recipes about her experiences leaving the corporate world to study at Le Cordon Bleu in Paris—where she fell in love. Her second book, The Kitchen Counter Cooking School: How a Few Simple Lessons Transformed Nine Women into Fearless Home Cooks, explored Flinn’s project to understand why people rely on convenience foods and what kinds of cooking lessons make an impact on inexperienced cook. That book earned rave reviews from dozens of media outlets and won a Book Award from the American Society of Journalists & Authors. Burnt Toast Makes You Sing Good: A Memoir with Recipes from an American Family is her third book.

A writer for more than twenty-five years in print and online, Flinn’s writing has appeared in many publications worldwide and her books have been featured in Elle, People, Good Housekeeping, the Wall Street Journal, The Christian Science Monitor, CBS This Morning and numerous NPR programs including Talk of the Nation. Her last day job was head of editorial for MSN in the United Kingdom. She serves on the board of directors for the International Association of Culinary Professionals. She divides her time between Seattle and Anna Maria Island, Florida, with her husband, Mike, and their trusty rescue dog, Maddy.
Learn More About Burnt Toast Makes You Sing Good
print

Life, on the Line

Appetite for Life
Back to Top