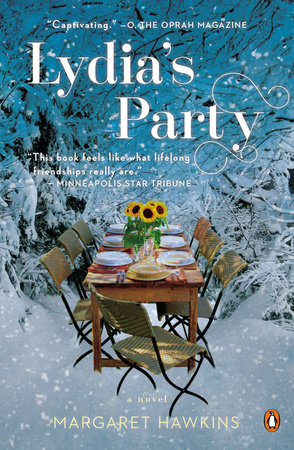 Chicago winters are notoriously long, but for almost twenty years come January Lydia’s friends have gathered for a cherished ritual and blow-out evening. Their host’s annual party offers them good food, wine, and a much-needed dose of conviviality on what often “turned out to be the coldest night of the year” (p. 4). Only tonight, Lydia is preoccupied with something other than her famed spicy chicken stew.

Now fifty-four, Lydia was once an aspiring painter who taught art classes to pay the bills. After her position at a suburban community college became permanent, Lydia gradually let teaching replace creating. Two decades pass, and suddenly-or so it seems to Lydia-her artistic dreams are likely on permanent hold, her romantic life is complicated, and she is no longer even “the woman who looks incredibly young for her age” (p. 6).

As Lydia prepares the feast, she contemplates the expensive French cooking pot she’d impulsively purchased. “She felt a little guilty. The cost, including overnight shipping, would have fed a family of four for a week” (p. 12). Yet, having lived frugally all her life, she is now determined to pursue frivolous indulgences. After all, these days she finds herself living with her ailing dog, Maxine, and her ex-husband, Spence, a down-on-his-luck musician who inhabits her basement rent-free.

Later, over a table overflowing with a cornucopia of food and wine, and with the enormous Maxine warming their feet, the women revel in sharing gossip and secrets while also laughing uproariously at past party exploits. Several of the women are artists, and their friendships are complicated by ambition and jealousy. All the women are pondering their lives and wondering “what’s next?” now that they are no longer young enough to easily attempt reinvention.

Bound primarily by friendship with Lydia, tonight’s partygoers are a potluck mix of personalities and backgrounds. Norris is a wealthy, internationally renowned painter, while Celia struggles to stay financially afloat. Jayne is happy in her stable marriage, but Betsy feels disconnected from her husband. Elaine has lived free of romantic entanglements, whereas Maura is defined by the twenty-one years she spent as her boss’s mistress.

Not all of them are looking forward to the night’s festivities, however. Norris knows that the others dislike her abrasive personality, and some of them resent her success. “What they didn’t know . was that she was nicer to them, or at least to Lydia, than she was to almost anyone else” (p. 52). She drives to Lydia’s, certain that this year’s party will be her last.

With wisdom, humor, and compassion, Margaret Hawkins chronicles the lives of seven women at midlife and the looming events that will force them to rethink their futures alone and together. A mesmerizing meditation on the vicissitudes of aging, the transformative power of art, and a stirring paean to female friendships, Lydia’s Party will resonate long after the final page.

Margaret Hawkins is the author of two previous novels and a memoir. She wrote for the Chicago Sun-Times and is a Senior Lecturer at the School of the Art Institute of Chicago. She lives in Chicago.

A CONVERSATION WITH MARGARET HAWKINS

What inspired you to write Lydia’s Party?

I was thinking about the complications of close-knit groups-families and old friends-and how they relate to one another over time. It’s about love, of course, but not only. There are these other currents, privacy versus transparency, the challenges of individual expression versus being a good citizen. I started the book in January, so that’s where that came from. Really, surviving winter in Chicago, year after year, is a kind of psychological odyssey, reminding you at every turn that you’re going to die. Even in summer, you know what’s coming. Perversely, I suppose, I find that kind of invigorating.

Besides being a novelist, you are an art critic and lecturer at the School of the Art Institute of Chicago. How do your “day jobs” inform your fiction?

Everything informs my fiction – doing the laundry, walking my dog. The art part is just what I’m interested in so the themes in the novel and the jobs are both an outgrowth of that. Of course, it’s also true that after writing a weekly column about art for years I’ve seen a lot of inadvertently humorous press releases and couldn’t help poking some fun. The teaching part is drawn somewhat from life-that’s how you think when you teach: how am I going to get and hold attention without being gratuitously theatrical? -but the details are from my imagination. I’ve never given a lecture on Ivan Albright. Specifically, in terms of this book, I’m intrigued by how artists relate to the world at large, how they think of themselves and justify the lives they (we) lead. I mean, is it really all right to lock yourself in a room and spend your days painting pictures or writing stories? I hope so, but sometimes I wonder.

Your descriptions of Norris’s paintings are incredibly vivid. Are they based on the work of a real-life painter or did they spring wholly from your imagination?

They pretty much spring from my imagination. The figure paintings are what I might like to paint if I could. But it’s like teaching; making up ideas for paintings is a lot easier than making actual paintings. I admire good figure painters, especially when they do something new with the genre. It takes a lot of guts to fly in the face of art history.

Did you ever have a List of Fears, as Lydia does?

Not exactly but when I was in seventh grade I had a teacher who started the year by asking us a battery of personal questions. We had to write down the answers and turn them in. One of the questions was: What are you afraid of? We were supposed to make a list. I don’t know if he was just indulging his curiosity or if it was school policy and this was some kind of “modern” technique to better understand children’s psyches but I remember loving that exercise. It was thrilling to me for some reason, to be invited to contemplate, then name my fears, and for years I went over the list in my mind, adding and subtracting items. I can’t remember much of it now but I do recall that the first item was big black dogs. Which is funny because my childhood dog had been medium-sized and black, and when I got to be an adult the dog I got was as big and black as you can get. So I gave that paradox to Lydia. I kind of like that it doesn’t make obvious sense. Maybe the power suggested by such a dog is an aspect of herself she feared?

Who are some of your literary influences?

I guess your deepest literary influences are what you read and loved when you were a child up to about fourteen or fifteen so mine would be A Wrinkle in Time, Alice in Wonderland, Oliver Twist, Lolita, the Bobbsey Twins, East of Eden, Edith Hamilton’s Mythology. For years I went to a Baptist church with my friend Debbie so I read the Bible. And my father pressed boy books on me-I don’t think he thought much of books by or about girls -so I read Tom Sawyer, Treasure Island. Everything I read influences me, though. I love newspapers.

As the novel progresses, the focus seems to shift from Lydia to Norris. Why is that?

I’m intrigued by the way people who are close to one another, especially people who are sometimes adversarial, seem to trade personality traits over time. You see it in couples, sometimes when they break up. And it happens when people die, the surviving friend or partner or offspring will take on traits of the person who’s gone, traits they didn’t even like, without knowing or intending to. It’s a kind of immortality. I thought Lydia was passing the baton to Norris, even though she didn’t mean to, like it was Norris’s turn to do some of the unsung work in the world now. She’s just getting started at the end. I didn’t plan that exactly; it just seemed to be what the story needed, a kind of opening out into the ambiguous future. Maybe, also, the book ends with Norris because a life story doesn’t end when someone dies. The story gets passed along to other people, to make something more from it. There tends to be a belief that the passing on of a spiritual inheritance is only a family matter-books often end with the next generation picking up where the older one left off-but it happens among friends, too, and that’s almost more poignant because the time is shorter and there’s less recognition for these relationships. Friendship doesn’t hold the same glorious position in the public imagination that family does.

You do a wonderful job of chronicling the varied experiences of each of the women as they maneuver middle age. Are these characters based on real-life women of your acquaintance?

No! But the dog, Maxine, is. She’s based on my late dog Max (the big black one). He was wilder, though.

How did writing this novel affect your own feelings about growing older?

I think I was working out some stuff. I feel better now than I did when I was writing it.

Another novel, of course. Also, I just finished an essay for Katherine Ace, a painter who revisits Grimm Brothers fairy tales, and I’m starting one for my friend Richard Loving, an amazing painter who is about to celebrate his 90th birthday the same week his new show opens.

Welcome to the Great Mysterious

The Unfinished Work of Elizabeth D.

The Myth of You and Me

Not My Daughter
Back to Top