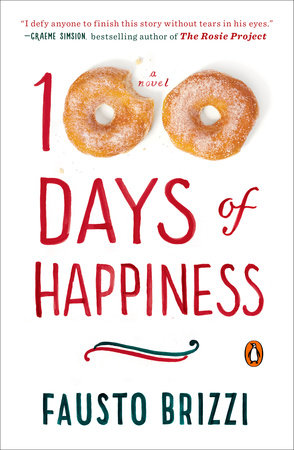 An Introduction to 100 Days of Happiness, by Fausto Brizzi

“Sometimes real troubles give you a strength you never had before” (100 Days of Happiness, p. 64).

Lucio Battistini enjoyed a very good life—even if he didn’t know it. Until recently, the thirty-nine-year-old personal trainer was blessed with a beautiful wife (Paola), two wonderful children (Lorenzo and Eva), and a freshly made bombolino (sugar doughnut) from his father-in-law’s bakery for breakfast every morning. But not long after Paola catches him cheating on her, Lucio learns he has a cancerous tumor in his liver that’s “more or less the size of a French fry” (p. 41).

When his doctor first diagnoses the cancer, Lucio is sleeping in the back room of his father-in-law Oscar’s bakery. Since Paola is still furious with him, Lucio decides to break the news to his best friends first. Umberto is a kind-hearted veterinarian and Corrado a womanizing airplane pilot. They are stunned, but both men vow to support Lucio to the end and beyond.

Eventually, Lucio builds up the courage to tell Paola about the cancer he’s nicknamed “Fritz.” She agrees to accompany him to the oncologist, but makes it clear that all is not forgiven. The results of his CAT scan are grim: the tumor has metastasized and spread to his lungs. Chemotherapy might extend the length of his life, but at a cost. The doctor tells Lucio that he has “a little over three months. Then the dose of painkillers you’ll have to take will render you insensible and the final phase will begin” (p. 49).

The next morning, Lucio contemplates the pluses and minuses of chemotherapy, eats his bombolino, and heads off to his job at Rainbow Gym. Aside from his regrettable affair with a curvaceous client, Lucio realizes, “the only gratification I get from my work is the 1,600 euros I earn each month” (p. 62). He promptly quits.

Feeling liberated, the avowed atheist walks out onto the streets of Rome and into the most important time of his life. With eyes wide open, Lucio embraces the quotidian pleasures of his daily life, from visiting his bookseller-friend Roberto to coaching his hapless water polo team, the Gang that Couldn’t Shoot Straight, to eating “possibly the world’s finest cheese focaccia” (p. 312) with his family. He also makes some big decisions about his rapidly diminishing present as well as the future he is no longer destined to share with his beloved wife and children.
Early on, Lucio recounts his own end, bluntly stating, “exactly one week after my fortieth birthday . . . I took my last breath and died” (p. 4). Yet, what unfolds over one hundred chapters is an intimate, joyous, and deeply life-affirming tale. A bestseller in Fausto Brizzi’s native Italy, 100 Days of Happiness will beguile readers everywhere as it opens eyes and hearts to the wonders of life—however short it is.

1. For Lucio, Oscar’s bombolini are the taste of childhood. Do you have a food that evokes a simpler time in life?

2. Before he plunges into the heart of his story, Lucio recounts the three most important events of his life: conception, becoming engaged to Paola, and his own death. What would be on your list?

3. What is on your personal bucket list of things to do before you die? How might your list change if you only had one hundred days left to live?

4. Why doesn’t Lucio tell Lorenzo and Eva that he is dying? In his place, how would you handle the situation? How do you think they’ll feel when they learn the truth?

5. Lucio’s prized collection of Diabolik comics has little monetary value, but it’s very important to Lucio that his son, Lorenzo, inherit it. Do you have a similar cherished object? If so, what is it, and to whom do you plan to give it?

6. Should Paola have forgiven Lucio earlier? Does dying necessarily excuse someone from his or her past misdeeds?

7. What are your thoughts on assisted suicide? Would your feelings be different if the person involved were a beloved friend or family member?

8. Despite writing about a difficult subject, Brizzi infuses his novel with a certain joyfulness that seems quintessentially Italian. Do you think an American could make similar decisions when facing death?

9. In the afterlife, Lucio is allowed to choose what age he will be for the rest of eternity. What age would you choose and why?

10. We know from a very young age that life is finite. Why is it so difficult to treat time as the precious commodity that it is?

Reading in the Dark
Seamus Deane

A Stopover in Venice
Kathryn Walker

A Rather Lovely Inheritance
C.A. Belmond
Back to Top