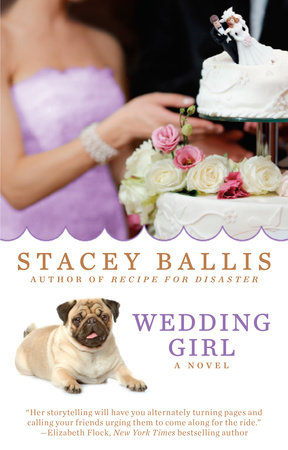 1. Sophie is bound and determined to have her dream wedding, even though she knows it goes beyond the scope of her means and requires that she hide the expenses from her fiancé. What do you think it says about someone who is that committed to a type of event that they will put themselves in financial straits in order to make it happen? What did it make you think about Sophie?

2. Sophie is very determined to keep herself hidden away after her public embarrassment. Would you have handled it the same way? What is the most publicly embarrassing thing that has happened to you?

3. Bubbles gives Sophie a safe place to land when her life falls apart. Why do you think Sophie chooses to move in with her instead of her parents? Who would you move in with in a similar scenario?

4. Sophie adores the movies of the 1930s and 1940s. How can you see those movies influencing her life, good or bad? What do you think it says about her that she is so much more drawn to those old films than to contemporary movies?

5. Do you think Sophie should be giving out wedding advice for money? Do you like or agree with the advice she gives? If you needed a second source of income, what sort of advice website would you launch?

6. WeddingGirl.com brings Jake into Sophie’s life. Why do you think she is drawn to him? Were you excited for her or concerned that he was going to be trouble?  Have you ever met someone randomly online and ended up knowing them in real life?

7. The Cake Goddess coming into the neighborhood means trouble for the already troubled Langers, and puts Sophie in the awkward position of wanting to help the failing business, without really being committed to it for the long run. Mark calls her out on getting Herman’s hopes up.  Do you agree with his side of things, or do you think it was right for Herman and Sophie to fight for the business?

8. The cake competition was bound to put Sophie back in the public eye, even if she was only assisting Herman. Do you think she was ready? If you were going to make a cake based on your hometown, what elements would it have?

9. Were you surprised to discover Mark is such an accomplished cook? Did it alter your opinion about him?

10. Were you glad that “Jake” turned out to be Mark? Do you think that he and Sophie are a good match? What do you think their wedding will be like? And who will bake the cake?
Learn More About Wedding Girl
print

How to Change a Life
Stacey Ballis

London Is the Best City in America
Laura Dave

Minus Me
Mameve Medwed

The Liar, the Bitch and the Wardrobe
Allie Kingsley

Off the Menu
Stacey Ballis

To Have and To Hold
Jane Green
Back to Top