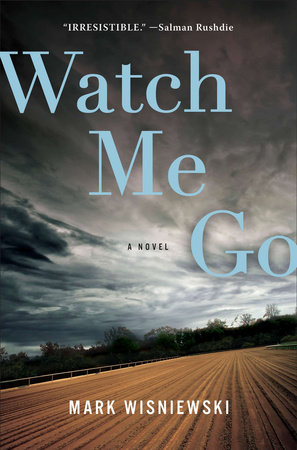 INTRODUCTION
Douglas “Deesh” Sharp has managed to stay out of trouble living in the Bronx, paying his rent by hauling junk for cash. But on the morning Deesh and two pals head upstate to dispose of a sealed oil drum whose contents smell and weigh enough to contain a human corpse, he becomes mixed up in a serious crime. When his plans for escape spiral terribly out of control, Deesh quickly finds himself a victim of betrayal—and the prime suspect in the murders of three white men.

When Jan, a young jockey from the gritty underworld of the Finger Lakes racetrack breaks her silence about gambling and organized crime, Deesh learns how the story of her past might, against all odds, free him from a life behind bars.

Interweaving Deesh’s and Jan’s gripping narratives, Watch Me Go is a wonderfully insightful work that examines how we love, leave, lose, redeem, and strive for justice. At once compulsively readable, thought-provoking, and complex, it is a suspenseful, compassionate meditation on the power of love and the injustices of hate.
ABOUT MARK WISNIEWSKI
Mark Wisniewski’s fiction has been published in The Best American Short Stories, The Southern Review, Antioch Review, and Virginia Quarterly Review. His stories have won a Pushcart Prize and a Tobias Wolff Award, and numerous fellowships in fiction. He lives with his wife on a lake in upstate New York.
DISCUSSION QUESTIONS

Our Picnics in the Sun
Morag Joss

Among the Missing
Morag Joss

Master of the Moor
Ruth Rendell

The Only Girl in the Game
John D. MacDonald

Rode Hard, Put Away Dead
Sinclair Browning
Back to Top