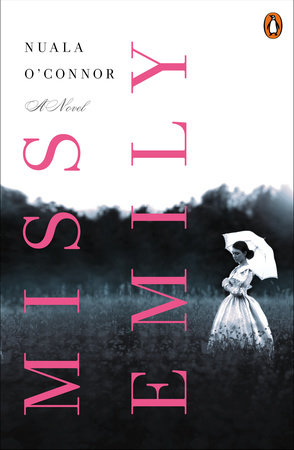 The poet Emily Dickinson was a study in contradictions—a reclusive spinster but a devoted friend, a prolific and passionate writer who shared her work with only a handful of confidants. Unknown in her own lifetime, her concise, emotionally charged poetry is now everywhere, from school textbooks to greeting cards. But what was she really like? Nuala O’Connor’s new novel, Miss Emily, imagines the poet in midlife, alive with the power of poetry yet in a world already shrinking to the confines of her family’s property. The arrival of a housemaid, the newly immigrated Ada Concannon, sparks an unusual friendship between Emily and the young woman—one that crosses class lines, earns the disapproval of the Dickinson family, and changes the two women’s lives forever.

As a young Irish immigrant in Massachusetts, Ada is judged by her background; even her employers, the Dickinsons, suspect the Irish are liars and cheats. To Emily, however, she is a breath of fresh air who expands the scope of the poet’s solitary world. While Ada is Nuala O’Connor’s invention, the fictional character stands in for the many Irish immigrants of the nineteenth century who experienced the same challenges in their new country. Miss Emily is filled with fascinating details of the typical social struggles of that era, and includes in equal measure aspects of Emily’s more upscale lifestyle, drawing on the poet’s personal letters and family history. The book paints a vivid portrait of everyday life at that time, particularly as experienced by women, whether as servants or those who were served—the reader is immersed in Emily and Ada’s world. In addition, O’Connor creates a context for Emily’s brilliant poetry, depicting her inspiration and creative process, and she weaves the poet’s words into her own narrative. Miss Emily is written in graceful prose, full of nuance and imagery, and, at its core, is an intimate and deeply affecting story of female strength and friendship. O’Connor’s fictionalized version of Emily Dickinson is a smart, sympathetic character, and Ada is the perfect counterbalance to Emily’s strengths and flaws, with a fascinating perspective all her own.

As the novel progresses, Ada and Emily blossom in each other’s company, and the young servant in particular thrives in her new American life. She is hardworking, feisty, and clever, and she soon falls in love with another employee in the Dickinson household. Unbeknownst to Emily, however, a violent and tragic event begins to unravel Ada’s happiness; although the young woman makes a stoic effort to contain her secret, Emily finally discovers the shocking truth. Inspired by her dedication to Ada and her desire for justice, Emily finds a hidden well of inner strength—committing an act braver than she thought possible in order to save her beloved friend.

1. Were you familiar with Emily Dickinson’s work before beginning this novel? Do you read poetry frequently? What drew you to the book?

2. Nuala O’Connor incorporates some of Dickinson’s poems throughout Miss Emily.  Which did you enjoy the most?

3. In nineteenth-century Amherst, Emily and Ada are both limited by their gender but Ada is also constrained by class. What examples can you find of each woman’s respective powerlessness?

4. Emily repeatedly describes Ada as her friend, much to the disgust of her brother and sister-in-law. Is it possible to be close friends with an employer, or with someone outside your own class?

5. The novel alternates between Emily’s voice and Ada’s. How would a narrative told only from Ada’s or Emily’s perspective have changed your understanding of the characters and events in the story?

6. What is your family’s history? Did you or your relatives immigrate to the United States, like Ada did? What was your/their experience like?

7. If you were to describe this novel to a friend, what three words would you use?

8. No one knows what caused Emily Dickinson to lead such an intensely cloistered life—some people have supposed that she suffered from an anxiety disorder or poor health. Based on Emily’s internal monologue in the book, what does O’Connor imply is the root of this behavior?

9. Is Emily happy with her life? Is Ada?

10. The closing lines of the book belong to Ada’s musing on hope, seeing it as “small and bald at first, but then it gathers feathers to itself and flies on robust wings” (p. 239). This calls to mind Emily’s famous poem “Hope is the thing with feathers,” which imagines hope as a bird “that perches in the soul.” What is the significance of this image? If possible, find a copy of the poem and compare it to Ada’s description.

Nuala O’Connor is a celebrated short story writer and novelist. She has won numerous awards in her native Ireland, including RTE radio’s Francis MacManus Award, the Cuirt New Writing Prize, the inaugural Jonathan Swift Award, and the Cecil Day Lewis Award, among others. Her short story “Peach” was nominated for a Pushcart Prize and won the Jane Geske Award, and she was shortlisted for the European Prize for Literature for her short story collection Nude. O’Connor lives in East Galway, Ireland, with her husband and three children.
Learn More About Miss Emily
print

In Need of a Good Wife
Kelly O’Connor McNees

By Any Other Name
Lauren Kate

The House of Hawthorne
Erika Robuck
Back to Top