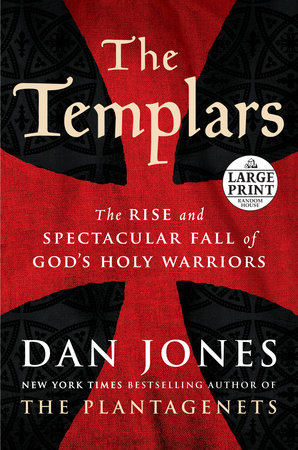 1. Why have the Templars enjoyed a level of fame that other orders, such as the Hospitallers or Teutonic knights, have not?

2. Christianity is a faith rooted in peace, and yet the crusades were brutally violent. How did the Templars justify being both trained killers and a monastic order?

3. The Templars were expected to live in pious self-denial, yet they accumulated vast amounts of wealth across Europe and the Holy Land. How did the “Poor Fellow-Soldiers of Christ” find themselves among the richest groups in the world?

4. Hugh of Payns set up the brotherhood with the mission of defending Jerusalem and protecting pilgrims. As the order grew over the following decades, how did the original role of the Knights of the Temple evolve? Did they stay true to their noble mission and the Templar Rule?

5. The Templars experienced countless setbacks during the crusades, and staged nearly as many comebacks. After terrible losses such as the battle of Hattin, how did the Templars muster the morale necessary to keep fighting? What made their order so resilient for so long?

6. Richard the Lionheart, Frederick II, and Louis IX were all powerful personalities and celebrated leaders. What qualities made them such great crusaders? How did their alliance (or lack thereof) with the Templars influence the outcomes of their campaigns?

7. After one hundred and ninety-two years of existence, the Order of the Temple was abolished swiftly and decisively. What were the main forces that brought about their downfall? Is there anything we can learn from the political machinery behind it?

8. The Templars became almost synonymous with the Latin kingdoms that had been carved out of the Islamic Near East. After the loss of the last Christian settlements in Outremer brought their military mission to an end, what became of the order’s role in society? Would they have been less vulnerable if James of Molay had agreed to unite with the Hospitallers?

9. In the centuries since the Templars’ disgrace and demise, groups and societies have been eager to revive the order’s name or invoke its values. What could explain their lasting appeal?

10. Beginning with Bernard of Clairvaux’s De Laude, the history of the Templars has been complicated by fictionalized accounts. Were you aware of any myths about the Templars before reading this book? Were they disproven?

Learn More About The Templars
print

The Wars of the Roses

The Rise and Fall of Ancient Egypt

Thomas Jefferson: The Art of Power

Nicholas and Alexandra
Back to Top