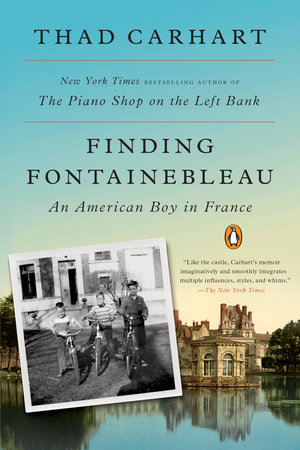 1. A memoir lies at the heart of Finding Fontainebleau, a story of the author’s life in France in the ’50s. Carhart begins the narrative with his boyhood account of the long prop airplane trip to France, and then the impressions this new place made on him. Are there aspects reminiscent of other stories—fiction or nonfiction—where the reader discovers a new world at the same time as the author? Is the France of sixty years ago more “exotic” than the country we know today? Discuss why that might be the case. 01

2. The Château of Fontainebleau figures prominently as the focus of restoration efforts in the present day. Similar work goes on in almost all countries, but the French have their own approach. How does Carhart’s account set forth the French philosophy of restoration? Are there similarities to how Americans care for their own national treasures?

3. Carhart’s experiences and adventures in France as a boy are always seen against the background of a large family—five children—living immersed in things French. They had no TV, one portable record player, and only French radio. How would things be different in the present day for a big American family living abroad?

4. Finding Fontainebleau gives us accounts of many of the kings and queens who lived at Fontainebleau and built its many parts. What traditions did they share that made their projects at Fontainebleau distinctive? Now that the monarchy is a thing of the past, how does the French Republic square its democratic ideals with the safeguarding of France’s oldest royal residence?

5. Carhart tells us how the Château has been threatened with ruin several times over its long history, most recently during the German occupation of France during World War II. How would its loss diminish the cultural inheritance of France in particular, and of Western civilization in general? Why is its survival important?

6. Discuss the ways in which Carhart’s account of his upbringing in Fontainebleau of the ’50s differed from the ways he and his wife raised their own children in Paris in the ’90s. What similarities—and differences—struck you? 01

The Smallest Lights in the Universe
Sara Seager

Save Me the Plums
Ruth Reichl

See You in the Piazza
Frances Mayes

All the Lives We Ever Lived
Katharine Smyth

Tomorrow Will Be Different
Sarah McBride

The Stranger in the Woods
Michael Finkel

Fire on the Track
Roseanne Montillo

Books for Living
Will Schwalbe

All at Sea
Decca Aitkenhead

Look at You Now
Liz Pryor
Back to Top