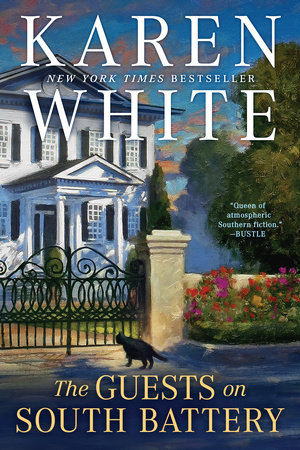 The Guests on South Battery
Karen White Questions for Discussion

2. Melanie is able to see and communicate with ghosts; is this a blessing or a curse? Do you know anyone with similar abilities?

3. The novel is set in Charleston, South Carolina, which is a city that really celebrates its history and is reputed to have many ghost sightings. If you had Melanie’s ability to communicate with ghosts, would you choose to live in Charleston and/or work as a Realtor? Why do you think Melanie stays in both her city and her profession when she seems to hate her abilities?

4.  Karen White often uses real, existing buildings and locations in her novels. Do you enjoy “seeing” a city through a novel in the way a reader sees Charleston in The Guests On South Battery?

5. As a new wife and mother, Melanie still expects to live life according to her detailed plans and schedules, but she is finding it extremely difficult to do so. Why do you think Melanie can’t seem to allow for deviation from her plans for her family and life?

6.  Do you consider Melanie to be a reliable or unreliable narrator? Why?

7. Melanie has a complicated relationship with her mother, and has to confront her mother’s past unexpectedly in the novel. If you discovered your mother had another child whom she never told you about, would it permanently affect your relationship with your her? Do you think Melanie reacted in a realistic way?

8. Jack is the first one to realize who Jayne Smith is; did he do the right thing by not telling Melanie right away? If you were him, would you have told Melanie or kept it a secret?

9. Do you think that Melanie jumped to conclusions prematurely about Jack and Jayne or was she justified in believing they were having an affair? Do you think Melanie should have trusted Jack despite any evidence to the contrary?
Learn More About The Guests on South Battery
print

After the Rain
Karen White

A Killer Carol
Laura Bradford
Back to Top