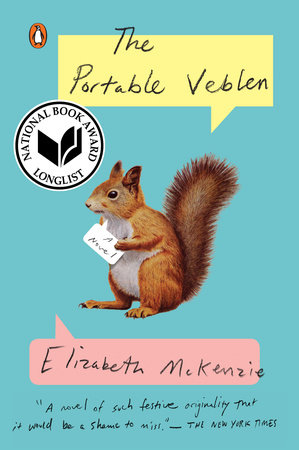 An Introduction to The Portable Veblen by Elizabeth McKenzie

“A life could be spent like an apology” (The Portable Veblen, p. 6).

Office temp and freelance Norwegian translator Veblen Amundsen-Hovda is newly engaged to marry Paul Vreeland, an up-and-coming medical researcher at Stanford University’s School of Medicine. Veblen and Paul have uneasy relationships with their parents, making them both secretly dread the requisite pre-wedding meet and greet. However, it is Veblen’s budding friendship with a neighboring squirrel that threatens to pull the plug on their upcoming nuptials.
For reasons she doesn’t quite explain, Melanie Duffy named her only child “after Thorstein Bunde Veblen, the Norwegian American economist who espoused antimaterialistic beliefs” (p. 22). Shortly after Veblen was conceived, Melanie ended her brief marriage to Rudgear, a troubled Vietnam veteran, and later remarried. Veblen eventually managed to escape the nest and build a quiet life of her own, but she’s dreading the moment she must tell her melodramatic, hypochondriac mother about the engagement.
Behind his impressive credentials, Veblen’s fiancé, Paul, is scarred by his own unorthodox childhood. Bill and Marion Vreeland live in Northern California’s Humboldt County, where they continue to eke out a living selling pot and hand-forged peace signs. And while Paul might have forgiven them for spending the day of his school science fair tripping on acid, he still resents the way they continue to favor his mentally disabled brother, Justin. “Couldn’t you assert my right to exist? For once?” he asks his father (p. 154).
Shortly before he meets Veblen, Paul has a bewildering erotic encounter with Cloris Hutmacher, a scion of the global conglomerate Hutmacher Pharmaceuticals. “The marriages that had led to her creation had been of alpha males and glorious females” (p. 43), and Paul is as drawn to her aura of success as her obvious pulchritude. Cloris, herself, is primarily interested in acquiring the rights to his invention.
A scout for the family business, Cloris believes that Paul’s Pneumatic Turbo Skull Punch—designed for use by field medics in combat situations—could make millions. Paul’s mentor flatly advises against signing with Hutmacher, but Cloris can be very persuasive. Suddenly Paul is in Washington, D.C., hobnobbing with decision makers from America’s military-industrial complex and dreaming of a future in which he would “have a portfolio statement, not some sticky tie-dyed bag full of limp, resinous cash” (p. 68).
Unlike those of her fiancé, Veblen’s ambitions are less worldly. She is untroubled by her lack of a 401(k) and finds joy in her unpaid translation work and the tiger lilies surrounding her rustic, below-market-rate cottage. At first, she believes Paul’s values mirror her own—until his radically different feelings about diamond rings, corn on the cob, and especially the friendly squirrel living in the cottage walls force her to reassess the man she thought she loved.
With insight and compassion, Elizabeth McKenzie deftly sends up dysfunctional families, the pharmaceutical industry, and Northern California’s distinctive collage of subcultures. Much like a certain squirrel, The Portable Veblen wisely illuminates how love can help us distinguish who we aspire to be and who we really are.

1. When Paul proposes, he presents Veblen with a diamond ring that becomes a source of contention throughout the novel. At that point in their relationship, should he have known she wouldn’t like it? Are engagement rings symbols of love, outmoded displays of conspicuous consumption, or something in between?

2. Early on, Veblen listens to her coworker Laurie’s “daily conversations with her husband” and is dismayed by the fact that she always ends the phone call by saying, “Love you” (p. 17). Do you agree with Veblen that leaving out the “I” is an ominous sign?

3. Can Veblen really talk with squirrels? Has an animal ever spoken to you?

5. After Paul tells Veblen about his family’s year as nudists, she thinks, “But repeated viewings of her mother’s unclad emotions had been way worse” (p. 182). Do you agree or disagree?

6. Paul tells Veblen that “it’s hard to watch Linus squirming under [Melanie’s] thumb” (p. 217). Yet Linus seems perfectly content caring for his hypochondriac wife. How do you view Melanie and Linus’s marriage?

7. Discuss an instance in which McKenzie uses the Pneumatic Turbo Skull Punch as a metaphorical device.

8. When Paul mistakenly comes to think that Veblen is cheating on him, he ransacks her cottage and discovers that she secretly takes antidepression medication. How would you feel if your fiancé hid this information from you?

9. Almost twenty years later, Paul continues to nurse anger toward Millie’s mother for separating him from Millie. What did you think about her decision? Would the adult Paul really want to have become a father at sixteen?

10. If Paul had not become disillusioned with Hutmacher Pharmaceuticals, would he and Veblen have been happy together? If it weren’t for Veblen, would he have allowed the company to market his invention without adequate testing?

11. Is Justin consciously trying to sabotage Paul’s happiness? How does Paul’s marriage improve Justin’s life? Is it fair of Paul to resent Justin’s sexuality?

12. Does Cloris Hutmacher deserve her fate? To what extent do you think McKenzie’s depiction of Hutmacher Pharmaceuticals is exaggerated?

13. The ’60s counterculture movement—as represented by Paul and Veblen’s parents—comes in for as much lampooning as the pharmaceutical industry and the military. Do hippies deserve as much mockery as drug company barons and military brass?

14. How much did you know about Thorstein Veblen before reading McKenzie’s novel? Did The Portable Veblen make you rethink your current level of consumer consumption?

Elizabeth McKenzie is senior editor of the Chicago Quarterly Review and managing editor of Catamaran Literary Reader. Her previous books include the short-story collection Stop That Girl and the novel MacGregor Tells the World. She lives in Santa Cruz.
Learn More About The Portable Veblen
print

The World According to Garp
John Irving
Back to Top