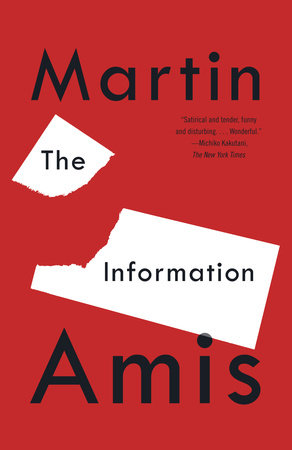 The questions, discussion topics, and author biography that follow are intended to enhance your group’s reading of Martin Amis’s The Information. We hope they will enrich your understanding of this brilliant new novel by a writer who has provided one of England’s most consistently provocative and commanding voices for over twenty years.

Richard Tull, at forty, considers himself a failure: his novels, never very successful, have become so abstract as to be unpublishable, and he ekes out a living writing book reviews. With growing bitterness and rage he contemplates the very different trajectory of his oldest friend, Gwyn Barry, a mediocre writer who, on the strength of a single bland, New Age bestseller, has attained the status of pop icon. Richard becomes increasingly dissociated from his wife, his children, and his own soul as he broods obsessively on ways to get even with his "friend." A hostile profile in a major newspaper? A cooked-up charge of plagiarism? Richard even tries to break up Gwyn’s marriage by seducing his wife. Finally he decides that Gwyn is so cushioned by success and adulation that he is impervious to mere criticism; only bodily harm will do the trick, and so Scozzy, a professional criminal who embodies the terrifying forces of violence and chaos with which Richard has never before been confronted, enters the lives of the Tull family, and events move beyond Richard’s control. Told in a highly inventive and charged language, The Information is a blackly comic novel about art, family, and self-delusion.

1. The fact that most of the novel’s characters, including Richard himself, are described from Richard’s rather unbalanced point of view puts into question just how accurately or fairly they are being described. The narrator even breaks in at one point to tell us that "Richard didn’t look as bad as he thought he looked. Not yet. If he did, then someone, surely, a woman or a child…would take his hand and lead him to somewhere nice and soft and white…" [p. 44]. If you had to describe the various characters in the book– Richard, Gwyn, Gina, Demi, Anstice, Scozzy, 13– more objectively, how would you do it?

2. Who is actually narrating the book? Is it Martin Amis himself, undisguised, or is it some other person, and if so, who? What purpose do the narrator’s periodic intrusions into the flow of the story serve?

3. Does Amis succeed in making Richard, in spite of all his faults, sympathetic or at least excusable? Do certain of Richard’s secret thoughts– such as his reaction to Anstice’s suicide– strike you as dreadful, or simply honest?

4. Richard assures us he is not a woman-hater. Is he telling the truth? How does he really feel about women, how does he manipulate them and how does he let them manipulate him? Does the novel present women and men as two irreconcilably different species, each unable to fully comprehend the other or to get along? How does Richard and Gina’s marriage compare with that of Gwyn and his wife, Demi?

5. Why has Amis chosen The Information as the title for his novel? What is meant by the "information"? Does the word mean the same thing throughout the novel, or does its meaning shift?

6. In spite of their mutual hostility, do you believe that Gwyn and Richard are somehow necessary to one another? Richard says "Whatever happens, we balance each other out….You’re part of me and I’m part of you" [p. 358]. Do you find that to be true?

8. Images of murdered children are present in the text from quite early. What effect does this have upon the reader’s state of mind? How does Amis manipulate the reader’s perceptions of the story with these images?

9. Gwyn’s writing follows a crowd-pleasing formula; does Richard write to formula, too? Writers, Richard believes, aim for "the universal" [p. 232]. How does Richard’s idea of the universal differ from Gwyn’s?

10. Richard’s "passion was the American novel. He had never been to America. Which about summed him up" [p. 87]. Do you think that Richard’s "passion" for the American novel is real, or an affectation? How does his trip to America change his conception of literature? How does it refocus his feelings about himself, his family and his obsession with Gwyn?

11. To what degree do children mold the emotional lives of their parents in this novel? Amis detects an affinity between Scozzy and Mrs. Verulam, both childless: "the family was one thing and they were the other" [p. 71]. Why are the childless set apart from the rest of the world? Do Gwyn and Demi, a childless couple, constitute a family? What does Gwyn’s refusal to have children indicate?

12. Why does the narrator keep returning to the immense facts of space and the universe? Richard anthropomorphizes the stars, Gwyn writes of astrology as opposed to astronomy: what does this say about them and about human nature generally?

13. What is the significance of the yellow dwarf within the narrative? Why does Amis introduce her? Does her presence have any connection with the stars and planets that the narrator brings into the picture?

14. Richard "was a revenger, in what was probably intended to be a comedy" [p. 96]. At several points during the novel the narrator wonders what genre the story belongs to: comedy, tragedy, romance, or satire. Richard himself sees his life as "anti-comedy" [p. 131]. To which genre do you think the novel belongs, or does it change genre as the story progresses?

15. At the end of the novel, Richard compares himself with "Abel Janszoon Tasman (1603-59): the Dutch explorer who discovered Tasmania without noticing Australia" [p. 373]. What does he mean by this comparison? Do you think that Richard has been permanently changed by Marco’s brush with disaster, or will he go back to his life of brooding and rage?

Martin Amis was born in Oxford, England, in 1949, the son of the novelist Kingsley Amis.
After a childhood spent in several different countries, he was educated at Oxford University, where he took a B.A. with honors in 1971. He was an editorial assistant at the Times Literary Supplement from 1972 to 1975, then spent some time as assistant literary editor at the New Statesman.


In 1973 Amis’s first novel was published, establishing him as one of the freshest and most exciting young writers in England. Since that time he has produced eight more novels, three volumes of journalism, and a screenplay, Saturn 3. His short stories have appeared in numerous magazines. Amis lives in London and has two sons.
Learn More About The Information
print
Back to Top