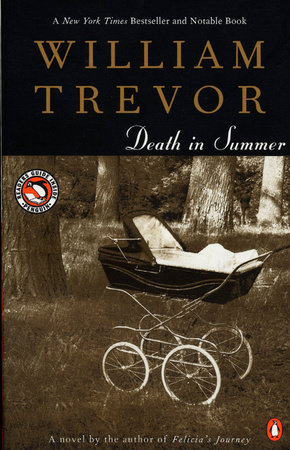 William Trevor’s fiction is inhabited by characters who suffer from an inner longing and desperation that is heartbreaking. InDeath in Summer, his most emotionally resonant novel, Trevor’s keen attention to the smallest detail and his subtle hand reveal the tragedy that comes with the inability to love.

Thaddeus Davenant is the last descendant of a distinguished English family and owner of Quincunx House. He has just lost his wife, Letitia, a person of “almost wayward generosity.” Yet, despite her compassion and her “Piero della Francesca face,” Thaddeus acknowledges that he was never able to really love Letitia. It is Georgina, their baby daughter, who receives all of Thaddeus’s attention. He admits he married Letitia primarily out of financial necessity, his own family fortune long since gone. It is this deception, even more than Letitia’s sudden death, which haunts Thaddeus throughout the novel.

When Thaddeus and Mrs. Iveson, his mother-in-law, begin interviewing for nannies to care for his infant daughter, their carefully manicured world is invaded by a series of coarse, unattractive young women. Pettie, the young girl who smells of cigarettes, proves unsuitable for the job, but develops an obsession with Thaddeus that will expose the frailties of both characters. Pettie, the product of the Morning Star, a grim institution for homeless children, latches onto Thaddeus, thinking of him as her salvation. The only affection Pettie has ever known came from her sexually abusive “Sunday Uncles” who visited the Morning Star on weekends.

We learn that Thaddeus was equally unloved as a child, ignored by his parents, and is therefore unable to feel love as an adult. Although their worlds could not be more different, Thaddeus and Pettie are both haunted by the same longing. Ironically, when Pettie’s obsession drives her to steal Georgina from Quincunx House, their sole chance at understanding and redemption occurs. Thaddeus must allow himself to feel real emotion for the first time and submit to the incredible love he has for his own daughter; Pettie must return to the Morning Star, the origin of her troubles. It is the death she encounters there that will bring her freedom. And it is Albert, her only friend, a seemingly simple young man of unrivaled compassion and understanding, who will ultimately show all the characters in Death in Summer the most hidden human failings.

William Trevor is the author of twenty-eight books, which include novels, short story collections, a play, a volume of memoir, and a children’s tale. Among his many prizes are a 1996 Lannan Literary Award for Fiction. Two of his books were chosen by The New York Times as Best Books of the Year. His short stories appear regularly in The New Yorker.

A CONVERSATION WITH WILLIAM TREVOR

In many of your novels, you show a real affinity for desperate, victimized women. Where does your capacity for understanding these women come from?

The capacity you’re thinking of is imagination; without it there can be no understanding, indeed no fiction.

The image of motherhood is pervasive throughout your work, especially mothers who are inattentive or abusive. Why?

I value mothers and motherhood enormously. For every inattentive or abusive mother in my fiction I think you’ll find a dozen or so who are neither.

In Death in Summer, there are several allusions to the Lindbergh kidnapping. Was this the inspiration for the story?

No. It’s natural for anyone of a certain age who remembers hearing about the Lindbergh kidnapping to recall it when a baby disappears.

How do you believe your own childhood has influenced your writing?

There is an element of autobiography in all fiction in that pain or distress, or pleasure, is based on the author’s own. But in my case that is as far as it goes. Descriptions of, for instance, physical pain have to be the author’s own experience. He cannot know, exactly, how someone else has suffered in this way. Otherwise, I don’t think my childhood—or later life—has had much influence on my writing.

Before She Met Me
Julian Barnes

A Game of Hide and Seek
Elizabeth Taylor

The Game
A. S. Byatt