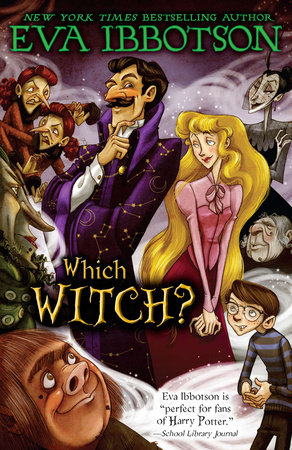 Ghosts and hags, wizards and banshees, mermaids and mistmakers—all are part of the magical worlds that Eva Ibbotson creates in her fantasy books for children. Even her more realistic stories are set in exotic places like the Amazon River in South America, where the natural world creates a mystical sense of wonder. Ibbotson introduces us to an array of fascinating characters and creatures: some from real life, some from folklore and mythology, and some completely original. What readers discover in her books is a love for the natural world in all its forms, plus fast-moving plots that emphasize the importance of showing kindness to others and never being quick to judge those who are different from ourselves. Humor plays an important role in her stories, for they are meant to be entertaining above all. Yet long after the last page is turned, the deeper meanings that emerge from these rollicking adventures linger in the reader’s mind.

Arriman is a very dark wizard, proud of his skills, but feeling bored and weary. Consulting a fortune-teller, he learns that a replacement wizard will arrive to relieve him of his duties, but he grows impatient waiting and decides that he must marry to produce an heir. The problem is finding a wife. The only wife for a wizard must be a witch, of course, but which witch? How to decide? The only way seems to be to hold a contest for the local witches. One glimpse of Arriman convinces Belladonna that she must win. But what chance does a white witch have of doing the dark magic worthy of a wizard’s heart? Belladonna finds unlikely but effective allies in a foundling named Terence and his pet earthworm, Rover. Rover seems to be a powerful witch’s familiar, an animal capable of inspiring very black magic. Belladonna might win. But then Madame Olympia, a skilled sorceress, arrives from London to compete, and the magical earthworm mysteriously disappears. Belladonna’s chances become slim at best until events take a surprising turn that even Madame Olympia could not have predicted.

Eva Ibbotson was born in Vienna, Austria, in the years before World War II. Her mother was a playwright and her father a scientist, but the marriage was unhappy and they soon went their separate ways. Eva’s early childhood was spent shuttling back and forth in trains across Europe, from one parent to the other. When Hitler rose to power, Eva’s father went to Great Britain, and her mother, after remarriage to a Russian philosopher, soon followed him. Eva switched languages and spent the rest of her childhood in a progressive boarding school, striving to become British. After taking a degree in Physiology at London University, she went on to do research at the University of Cambridge, but she found the experiments she had to perform on living animals very distressing. The results of her experiments were “peculiar,” she relates, so when a fellow student, Alan Ibbotson, suggested she could do less harm to science by leaving it and marrying him, she accepted without hesitation. The couple moved to Newcastle, in the north of England, where they raised four children and Eva began writing short stories. When the youngest son started school, she wrote her first full-length novel for children and continued to write for children and adults alternately, much to the delight of her many readers.

The Shaman’s Apprentice: A Tale of the Amazon Rain Forest
by Mark J. Plotkin and Lynne Cherry
HC: Gulliver Books

The National Trust
The National Trust is an organization dedicated to the preservation of the countryside, coastline, and important buildings and gardens in England, Wales, and Northern Ireland. This site lists interesting places to visit.
www.nationaltrust.org.uk

National Geographic
Site of the National Geographic Society. Look up maps of London and the Amazon River. Search the sea around the British Isles for places where the Island might be found.
www.nationalgeographic.com

Ghost Watch UK
An English organization that specializes in paranormal investigations. Their site includes stories and anecdotes of people’s encounters with ghosts and ghostly phenomena.
www.ghostwatchuk.org

AN INTERVIEW WITH EVA IBBOTSON

Magical beings are central to many of your books. Have you always been interested in the supernatural?

No, curiously I was never particularly interested in the supernatural—quite the contrary. Ghost stories frightened me badly as a child, although I didn’t really believe that ghosts existed. I think I began to write about ghosts and witches and magic generally to make children less afraid; to turn these beings into creatures much like us but of course able to do more interesting things. My ghosts and witches are more like underdogs, people on the fringes who need sympathy and help. And the witches in Which Witch? are based on my relatives—the nice witches anyway!

Your main characters all seem to come up against people who are more interested in money and power than in feelings and compassion. Is this a theme you consciously set out to explore in every book?

I think of my books as entertainments, a kind of present I give the reader, and any serious themes that come up are a by-product. But of course when I am creating “baddies” for the purposes of the plot, I find myself choosing people with the characteristics I dislike most—and there is nothing I despise more than financial greed and a lust for power.

Humor is an important element in most of your stories. What do you think is the role that humor plays in shaping our lives and our personalities?

I don’t really know how to define humor or how to describe it; it is something you have to show. But I do know that both in my personal life and in my work I would be completely lost without humor…without the ability to turn things upside down, to extract something ridiculous out of the most solemn moment. Incidentally, when I’m writing I find humor—jokes that aren’t forced or silly—by far the hardest thing to pull off.

In Journey to the River Sea you have written a more realistic story with a strong theme about the importance of nature to the human spirit. What was your inspiration for this story?

I wrote Journey to the River Sea not long after my husband died. He was a committed naturalist, someone who combined a deep knowledge of animals and plants with a spiritual outlook that had been strengthened by his war service in India and Burma. I think I felt at that time that I needed a rest from my usual fantasy stories—though goodness knows the Amazon landscape is fantastical enough in its own right! I wanted to write a story that was simple and old-fashioned and direct. But I have to say that the reasons one gives for writing anything tend to be made up afterwards. At the time you just find yourself doing it!

Learn More About Which Witch?
print

The Pepins and Their Problems
Polly Horvath

The Mystery of the Cupboard
Lynne Reid Banks

The Ogre of Oglefort
Eva Ibbotson

For Those About to Write
Dave Bidini

The Hunt for the Panther #3
Rachelle Delaney

Embassy of the Dead
Will Mabbitt

The Best of Archie Comics: 80 Years, 80 Stories
Archie Superstars
Back to Top