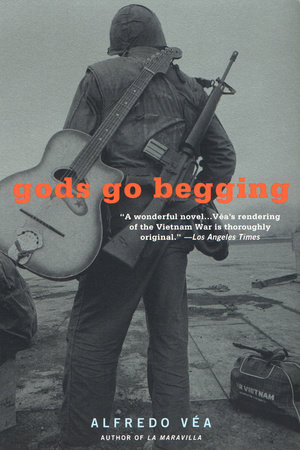 Reviewers have hailed the novels of Alfredo Véa as “big-hearted and magical” “brilliant, rich, and extravagant.” He has been called “a cross between John Steinbeck and Gabriel Garcia Marquez.” The critically acclaimed author of two previous books, Véa saw his first novel, La Maravilla, published in 1993 and go on to become a minor classic of Chicano literature and a core text in Latin studies programs. His unusual profile-former migrant farm worker and Vietnam vet-turned-novelist-attracted the attention of various groups and brought Véa to Indian reservations, Veterans’ associations, migrant communities, and inner-city schools to read and talk about his work. His second novel, The Silver Cloud Café, garnered excellent reviews. Gods Go Begging is Véa’s third novel, and the first to draw upon his own personal history.

Named “One of the Best Books of 1999” by the Los Angeles Times, Gods Go Begging tells an unforgettable story of war and peace, guilt and innocence, suffering and love, and of one man’s cathartic climb toward salvation.

A practicing criminal defense attorney and the author of two previous novels, La Maravilla and The Silver Cloud Café , Alfredo Véa was born in Arizona and lived the life of a migrant worker before being sent to Vietnam. After his discharge, he worked a series of jobs-from truck driver to carnival mechanic-as he put himself through law school. Gods Go Begging was also the winner of the 1999 Bay Area Book Reviewers’ Award for Fiction. Véa lives in San Francisco.

Anatomy of a Soldier
Harry Parker

The Eagle Has Landed
Jack Higgins
Back to Top