Maggie, a Girl of the Streets and Other New York Writings Reader’s Guide 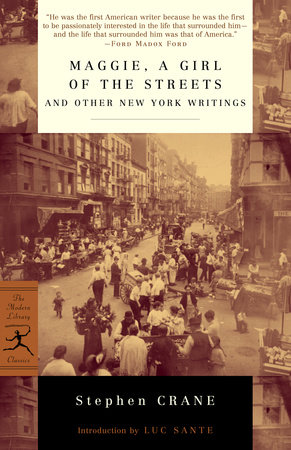 Maggie, a Girl of the Streets and Other New York Writings Reader’s Guide

print
Maggie, a Girl of the Streets and Other New York Writings Reader’s Guide

1. Taking the writings in this volume together, discuss the picture of slum life in turn-of-the-century New York that Crane gives us. What are some of its defining features? How is poverty reflected in the lives of Bowery dwellers?

2. Reflect on the continuities and differences between the characters in Crane’s two Bowery Tales, “Maggie” and “George’s Mother.” For instance, how does Jimmie compare to George Kelcey?

3. How does “Maggie, a Girl of the Streets” speak to the constraints imposed by gender conventions? What choices are available to Maggie? Why does she go with Pete? Why is she driven from her mother’s house?

5. Critics have praised Crane’s style-especially in “Maggie, a Girl of the Streets,” with its stark, minimal style-as breaking with nineteenth-century literary conventions, and in many ways anticipating major features of subsequent American writing. What makes Crane’s writing unique and innovative?

6. In his emphasis on the realistic depiction of the inexorable effects of outside forces-social and natural-on the lives and destinies of individual characters, Crane is often described as a literary naturalist. Is this an apt description? Discuss naturalism in relation to Crane’s New York writings, and the relationship of Crane’s work to that of other writers (like Dreiser and Norris) usually associated with the term.

Learn More About Maggie, a Girl of the Streets and Other New York Writings
print

A Rose for Emily and Other Stories
William Faulkner

The Garden Party and Other Stories
Katherine Mansfield

The Year of the Hare
Arto Paasilinna

A Vocation and a Voice
Kate Chopin