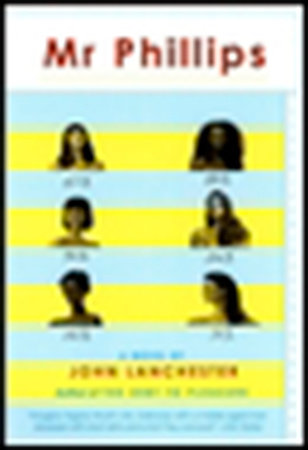 Mr. Phillips wakes on a Monday morning in his modest, nearly mortgage-free house, in the bed he has contentedly shared with his wife of nearly thirty years (though to be honest, at night he lies beside her and dreams of other women), ready to face another ordinary day. Except that this day is not ordinary, for on the previous Friday, Mr. Phillips was summarily sacked. Unable to deal with this disaster—unable even to tell his wife—Mr. Phillips rises at his usual hour and prepares himself, as he has done his entire working life, for the job he no longer has.

Dressed for work with no work to do, Mr. Phillips wanders the streets of London, seeing the world as if for the first time. What he sees triggers memories: some are improbably funny, some deeply affecting, and all gradually build a portrait of a decent man who only forty-eight hours before knew exactly who and what he was—husband, father, son, valued employee, home owner—and on this day wonders who and what he can become.

It is John Lanchester’s great gift as a writer that, using the bits and pieces of Mr. Phillips’s past, he compresses into this short novel a fully experienced life and, in the process, makes him a kind of Everyman for our times.

John Lanchester’s first novel, The Debt to Pleasure, was greeted with great critical acclaim. Translated into twenty-two languages, it won four major literary awards—including the coveted Whitbred and the prestigious Hawthornden—was a finalist for the Los Angeles Times First Fiction Award and a New York Times Notable Book. Reviewing that novel in the New York Times Book Review, Frank Prial ended by suggesting that the author “might think about giving up his day job.” John Lanchester did just that, giving up his position as Deputy Editor of the London Review of Books, though occasional pieces of his still appear there as well as in The New Yorker and Granta. John Lanchester is currently working on his third novel at his London residence.

“A writer whose gifts border on the demonic.” —Michael Upchurch, Chicago Tribune

“His writing has the clarity and zing of fine cut glass.” —USA Today

“Lanchester has clearly learned from the masters. I can’t imagine where he goes after such a breathtaking debut—but wherever it is, I look forward to tagging along.” —Pam Lamber, People (in reference to The Debt to Pleasure)

1. For much of the novel, the author refers to his protagonist as “Mr. Phillips” as opposed to his first name. What does he accomplish by doing so? What is the significance of Lanchester’s choice of Victor as Mr. Phillips’ first name considering the events that befall the character?

2. How would you describe the depiction of women in Mr. Phillips? What is your opinion of Mrs. Phillips and Clarissa Colingford? To what extent do you feel that this opinion is influenced by the fact that these women are described through the voice of Mr. Phillips instead of an impartial narrator?

3. In some sense, Mr. Phillips is a voyeur—watching the women playing tennis in the park, staring at people in their cars, viewing the adult film. In what sense is the reader also a voyeur in terms of observing both the people Mr. Phillips watches and Mr. Phillips himself?

4. John Lanchester employs a unique method of transitioning between chapters, often making an inexplicable jump in chronological order. How does this add to the mood of the novel? Do you view this as Lanchester’s comment on our tendency to “lose” parts of our day because of their monotony only to recall the specifics from memory if so required?

5. What do you make of Mr. Phillips’ preoccupation with numbers and calculations? Does it contribute to his lack of emotional intensity or is it simply a manifestation of it?

6. Mr. Phillips focuses on numerous aspects of business, from the promises of the travel agent’s posters to the disregard with which Mr. Wilkins fires Mr. Phillips. What major comments do you feel this novel makes regarding the influence of the corporate world on our everyday lives?

7. In what ways does his experience with the bank robbery prove to be a maturation process for Mr. Phillips? Do you feel that his survival in the face of danger will provide enough of an impetus for him to tell Mrs. Phillips that he has been fired?

8. What compels Mr. Phillips to help the elderly woman with her grocery bags? Is this ultimately an act of kindness or an attempt by Mr. Phillips to reconfirm his own usefulness? In what ways does the story of Mr. Erith relate to that of Mr. Phillips?

9. The final line of the novel (“He has no idea what will happen next”) does not provide the normal sense of closure. Is this a disappointment to the reader or the appropriate way to finish the novel? What do you see as the future of Mr. and Mrs. Phillips?

When Captain Flint Was Still a Good Man
Nick Dybek

The Shape of Bones
Daniel Galera

A Posthumous Confession
Marcellus Emants
Back to Top