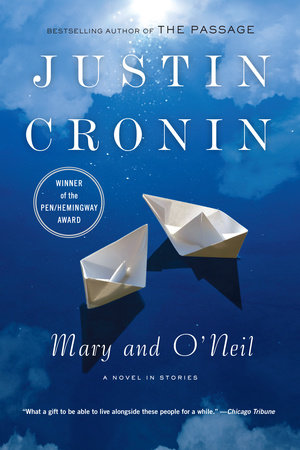 The questions, discussion topics, and author biography that follow are intended to enhance your group’s reading of Justin Cronin’s Mary and O’Neil, a collection of connected stories hailed as “an artful debut,” by The New York Times Book Review, and “an astonishingly good first novel,” by the Chicago Tribune.

Cronin’s tales trace the lives of Mary Olson and O’Neil Burke, two vulnerable young teachers who rediscover in each other a world filled with promise and hope. From the formative experiences of their early adulthood to marriage, parenthood, and beyond, this novel-in-stories illuminates the moments of grace that enable Mary and O’Neil to make peace with the deep emotional legacies that haunt them: the sudden, mysterious death of O’Neil’s parents, Mary’s long- ago decision to end a pregnancy, O’Neil’s sister’s battle with illness and a troubled marriage. Eloquent in its understatement, Mary and O’Neil celebrates the uncommon in common lives, and the redemptive power of love.

1. The deaths of O’Neil’s parents, Miriam and Arthur, in the opening story, “Last of the Leaves,” haunt O’Neil throughout the rest of the book. When he and his sister, Kay, discover the credit card bill including the charge for the motel where Arthur and Miriam stopped on their fatal trip home, they are deeply disturbed, leading O’Neil to realize “how little he truly knew about his parents.” And O’Neil must come to accept that his parents’ lives were much more complicated and full of secrets than he had ever imagined. Was the accident that killed them completely an accident, or was it, in some way, an inevitable consequence of choices made? How do secrets kept and secrets shared figure throughout the stories in Mary and O’Neil?

2. Among the pivotal events of Mary and O’Neil are Miriam and Kay’s breast cancer; Mary’s abortion and later, the birth of her daughter, Nora; and Kay’s discovery of her husband’s infidelity. As a man, is Justin Cronin able to understand and convey with honesty and accuracy, the thoughts, emotions, details and reactions of his women characters to these quintessentially female experiences?

3. In the story “Orphans,” Cronin describes how O’Neil and Kay return to their childhood home to settle their parents’ affairs after the car accident. Cronin writes, “the weeks following their parents’ death passed quickly and became, for O’Neil, a time of strange and unexpected contentment . . . with each trip to the Goodwill box behind the Price Chopper, each final phone call to a bank or loan company, he felt his parents becoming real to him in a way that they had never been in life. More than real: he felt them move inside him.” As he gets older, does O’Neil become increasingly like either one, or both, of his parents? Is his marriage to Mary a mirror of–or a contrast to–Arthur and Miriam’s relationship?

4. Miriam and Kay had a difficult relationship. Miriam feels that she and her daughter never really got along, and describes Kay as indifferent to the rest of the family, withdrawn, self-absorbed and dismissive of Miriam. Mary, also, had a distant relationship with her mother. Compare the two mother-daughter relationships.

5. Are there similarities between Arthur’s feelings for Dora in “Last of the Leaves” and O’Neil’s brief encounter with Patrice in “Orphans?” Do these two romantic episodes indicate ways in which father and son are alike?

Justin Cronin is a graduate of the Iowa Writers’ Workshop and associate professor of English at La Salle University. His fiction has appeared in many literary journals, including Epoch, Greensboro Review, and Crescent Review, and in Philadelphia Inquirer Magazine. He lives with his wife and their young daughter in Philadelphia.
Learn More About Mary and O’Neil
print

Next To Never
Penelope Douglas

The All You Can Dream Buffet
Barbara O’Neal

One Night at the Lake
Bethany Chase

Why Can’t I Be You
Allie Larkin

Trust Me on This
Jennifer Crusie

The Plus One
Sarah Archer

The Name of the Game
Nora Roberts

The Last Time I Saw You
Elizabeth Berg
Back to Top