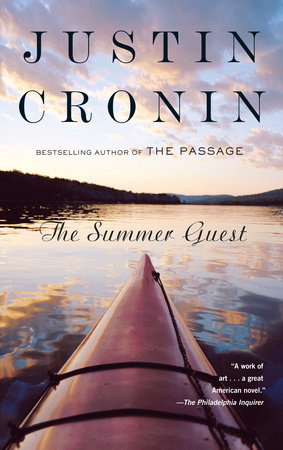 From award-winning author Justin Cronin, The Summer Guest takes readers to an idyllic Maine hideaway where for decades vacationers have found solitude, tranquility, and of course superior fishing. For one of those travelers, the journey to this camp has taken on special significance; nearing the end of his life, financier Harry Wainwright has booked one last trip to this special place, whose history and gorgeous scenery are intricately woven with his own story. He has also decided to make an astonishing bequest, one that will open new chapters and close some that are decades old, transforming the lives of those who have loved this rustic fishing lodge as much as he has.

Tracing the stories of three generations, from the frontlines of war to the private battlefields of home, The Summer Guest poignantly depicts they ways in which families redefine themselves in the face life’s greatest tests. Written in the gentle, perceptive prose that earned Justin Cronin unanimous praise for his debut Mary and O’Neil, this is a book to treasure—and to share with your most treasured friends.

The questions, discussion topics, and author biography that follow are intended to enhance your reading of Justin Cronin’s The Summer Guest. We hope they will enrich your experience of this tender, transporting novel.

“In this remarkable and far-reaching book, where overlapping lives and loves unfold to reveal their secrets, Justin Cronin manages to make both the ordinary and extraordinary moments of life reverberate with a quiet—and magical—majesty. He is a joy to read.”
—Elizabeth Strout, author of Amy and Isabelle

1. Discuss the fishing camp as a character in itself—a character that provides both comfort and treachery to its visitors. Does the camp evolve throughout the novel? What makes it so meaningful to so many?

2. The milestones of life propel the novel’s storyline. In what way do such turning points—marriage, mortality—unfold for the primary characters? What wisdom does one generation pass on to the next in The Summer Guest?

3. What is the effect of the novel’s prologue? What were your first impressions of Joe as he experienced homecoming after World War II, and how do these images carry you through the rest of the novel? Is the camp a refuge from the mainstream world, of a stark reflection of it?

4. In many ways, Harry and Joe lived parallel lives as widowers, parents, and eventually as men too physically frail to care for themselves. Compare and contrast their attitudes toward life. Did their lives intersect through fate alone?

5. How do the novel’s contemporary scenes compare with those from previous generations? Do Jordan and Kate have a simpler life than Joe and Amy had?

6. What locales are monuments to your own past? Describe some of the places that have special significance to you, and what it’s like to return to them.

7. Which storytelling point of view was most effective for you in The Summer Guest? Did gender lines affect the novel’s various voices? Are all the characters telling essentially the same story?

8. In what ways does war form a thread throughout the novel? What are your recollections or perceptions of the Vietnam conflict, and how might you have responded to the draft if Joe Junior had been your son? What does the absence of the draft mean to Jordan’s generation?

9. Several of the novel’s characters teeter on the boundaries between life and death. What seems to keep some of the characters tethered to life, while others cannot endure it? What is significant about the novel’s closing images of Bill and Joe, in light of their previous experience as survivors?

10. Discuss Joe Junior’s journey into Manhattan, a scene that occurs early on. Does he feel fulfilled at that point in his life? Would you have been able to sell such a legacy to Harry?

11. The lawyers on retreat appear to clash with their surroundings, uncomfortable with the natural world and inept at navigating its dangers. Do they in any way reflect the darker side of Joe’s home life? Or is his life a utopia?

12. Who are the novel’s most honorable characters? Where is the most genuine love found in The Summer Guest?

14. What motivates Lucy to return to her old haunt and become “Alice” again at the end of the novel? What did that chapter in her young life mean to her, and what must it have been like for her to revisit it (this time in the role of daughter, under May’s wing)?

15. Are any of the novel’s primary characters spared from the pain of tragedy and loss? What coping strategies do they use?

16. The novel ends with a glimpse of the future as Kate gives birth to a daughter. What do you predict the child will discover about love and life? How do the characters pay tribute to their parents?

17. Justin Cronin’s previous book, Mary and O’Neil, also addresses the issues of coming of age, parenthood, and making peace with illness. In what ways do these concepts play out differently in The Summer Guest?

Born and raised in New England, Justin Cronin is the author of the novel-in-stories Mary and O’Neil, which won the 2002 PEN/Hemingway Award and the Stephen Crane Prize. A graduate of the Iowa Writers’ Workshop, he has also received a Whiting Writer’s Award, an NEA fellowship, and a Pew Fellowship in the Arts, and his fiction has appeared in many literary journals, including Epoch, Greensboro Review, Crescent Review, and the Philadelphia Inquirer Magazine. Cronin lives with his wife and their children in Houston, Texas, where he is a professor of English at Rice University.

Critical acclaim for Mary and O’Neil:
“Justin Cronin succeeds, touchingly and tenderly, in portraying life itself as a triumph of hope over experience.”—The Boston Globe

“Offers an array of graceful and reflective stories that illuminate the painful and the ordinary in its characters’ lives.”—The New York Times Book Review

“A literary love story . . . about the fragility of good fortune and the accidental ways of finding happiness.”—USA Today

From the Hardcover edition.
Learn More About The Summer Guest
print

We Are All Welcome Here

Abide with Me
Back to Top