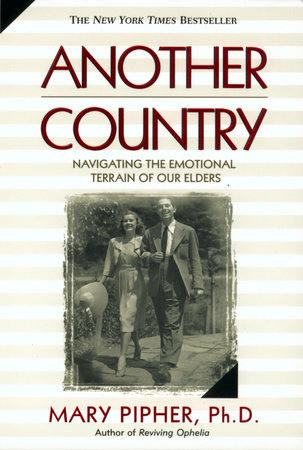 INTRODUCTION
Mary Pipher’s Reviving Ophelia, the phenomenal bestseller about the experiences of adolescent girls today, changed forever how we understand their world, and ours. Now, Mary Pipher turns to an equally troubled passage—the journey into old age. This is a book about our parents and grandparents, because they don’t grow old in a vacuum. The process can be just as painful for us—daughters and sons, granddaughters and grandsons—as for them. The gradual turning of life’s tide can take us by surprise, as we find ourselves unprepared to begin caring for those who have always cared for us. Writing from her experience as a therapist and from interviews with families and older people, Pipher offers us scenarios that bridge the generation gap. And in these poignant and hopeful stories of real children, adults, and elders we find the secrets to empathy. With her inimitable combination of respect and realism, Pipher gets inside the minds, hearts, and bodies of elder men and women. And we begin to understand fully that the landscape of age is truly that of another country. Today’s world is vastly different from the one our parents grew up in. It’s not the world in which helping aging parents meant stopping in at their house every day; in which children could learn about the richness of life from their grandparents; and in which grandparents and children were sustained and nourished by the unique bond between those on the opposite ends of a lifetime. We need new ways of supporting one another—new ways of sharing our time, our energy, and our love. In Another Country, Mary Pipher will show us how.
ABOUT MARY PIPHER

A clinical psychologist in private practice in Lincoln, Nebraska, Mary Pipher has been seeing families for over twenty years. She is also a visiting assistant professor at the University of Nebraska, and a commentator for Nebraska Public Radio. Dr. Pipher received her B.A. in Cultural Anthropology from the University of California at Berkeley in 1969, and her Ph.D. in Clinical Psychology from the University of Nebraska in 1977. As an anthropology major in college, Dr. Pipher became aware of the impact of culture on the psychology of individuals. She wrote her previous book, Reviving Ophelia (Grosset/ Putnam, 1994), to help parents understand the situation young teenage girls are facing in our country today. Reviving Ophelia immediately struck a chord, and Dr. Pipher began receiving speaking requests from all over the country.

Now, two years later, with Reviving Ophelia a #1 New York Times bestseller, remaining on the list for more than one year, Mary Pipher has become a national authority on family issues, speaking to groups of professional psychologists, educators, organizations of schools and college presidents across the country. Her articulate and energetic lectures create enthusiasm for her ideas in a way that unites rather than polarizes her audiences, and she has become dedicated to reaching the largest possible audience with her important message.

Dr. Pipher is also the author of Hunger Pains: The American Women’s Tragic Quest for Thinness (1988). She writes short fiction which has won numerous awards including the Alice P. Carter Award and recognition in the National Feminist Writer’s competition. In the words of Mary Pipher, “I love my life as a writer. Writing has been the great gift of my middle years. It’s a tender mercy, a reason to wake up every morning.”

A plainspoken woman who retains her simplicity, Mary Pipher has seen her daily life change, but she has not changed. She lives in Lincoln, Nebraska.

Learn More About Another Country
print

A Piaget Primer
Tracey A. Revenson and Dorothy G. Singer

What Do You Say?
Ned Johnson and William Stixrud, PhD

Getting Our Bodies Back
Christine Caldwell

Children Who See Too Much
Betsy Mcalister Groves

I Can Hear You Whisper
Lydia Denworth