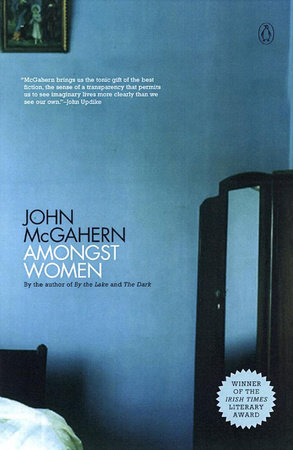 INTRODUCTION
Amongst Women pulls us into a tight family circle with its first sentence: “As he weakened, Moran became afraid of his daughters” (p. 1). A “once powerful man” (p. 1), Michael Moran was an officer in the Irish War of Independence in the 1920s. He was intelligent, fierce, and deadly, but like many soldiers after a war, he felt displaced, unwilling to continue in the military during peacetime and unable to make a good living in any other way. “The war was the best part of our lives,” Moran asserts. “Things were never so simple and clear again” (p. 6). While the army provided the security of structure, rules, and clear lines of power, Moran’s life after the war has consisted of raising two sons and three daughters on a farm and scraping out a living through hard manual labor. A widower, Moran confuses his identity with the communal identity of his family in a gesture that divides and conquers. Moran’s daughters are “a completed world” separate from “the tides of Dublin or London” (p. 2). As such, he can control them, as when he discourages one from accepting a university scholarship. No longer powerful, Moran is repeatedly described as withdrawing into himself “and that larger self of family” (p. 12) in order to channel his aggressions into a shrunken realm he attempts to control. He can be tender with his children, but he also berates and beats them. His adjustment from guerilla fighter to father is never complete, and the question of how to maintain authority over children while allowing them room to grow is central to the novel.

Nowhere is this struggle between dependence and independence more pronounced than in the character of Luke, the oldest son who runs away from Moran’s overbearing authority, never to return. Rejecting his father, Ireland, and all of the violence and provincialism he associates with both, Luke flees to England. He ignores all but one of Moran’s letters, and he never returns to Ireland except at the end of the novel when his sister gets married. “Please don’t do anything to upset Daddy,” one of his sisters pleads, typically trying to placate her father. “Of course not. I won’t exist today,” Luke replies (p. 152). His best weapon against Moran’s control is absence. Whereas the daughters, “like a shoal of fish moving within a net” (p. 79), find individuality painful compared to the protection of their familial identity, Luke gains strength in departure. “I left Ireland a long time ago” (p. 155), Luke announces gravely. As it does for many of James Joyce’s characters, life in Ireland seems like imprisonment.

“I’m afraid we might all die in Ireland if we don’t get out fast” (pp. 155-156), says Moran’s younger son, Michael. Like other Irish writers, McGahern asks whether exile offers the only hope for freedom and individuality. How does the political turmoil that suffuses Irish history affect the smaller unit of the family? How do other elements of Irish life contribute to familial dysfunction? In the world McGahern portrays, escape proves sustaining for a character like Luke, but it is not an unequivocal good. Luke is strong but cruel like his father. His sisters, on the other hand, fail to break away from the family, and by the time of their father’s death, “each of them in their different ways had become Daddy” (p. 183). Their identification with and loyalty to Moran threatens to subsume them, but it also gives them a kind of strength, as Michael seems to understand: “In the frail way that people assemble themselves he, like the girls, looked to Great Meadow for recognition, for a mark of his continuing existence” (p. 147).

One of Ireland’s most widely read authors, John McGahern was born on November 12, 1934. He and his four siblings lived with their mother in County Leitrim until her death in 1945, when they moved to their father’s home at the police barracks in Cootehall, County Roscommon. In his early twenties McGahern worked as a teacher and wrote an unpublished novel, “The End and the Beginning of Love.” His first published novel, The Barracks (1963), won the Æ Memorial Award and earned him an Arts Council Macauley Fellowship. His next novel, The Dark (1965), was widely praised and drew comparisons to James Joyce, but it also offended the Archbishop of Dublin and the state censor, who banned the book and revoked his teaching position.

McGahern refused to capitalize on his notoriety, instead continuing to publish quietly. Three novels followed: The Leavetaking (1974), The Pornographer (1979), and Amongst Women (1990; winner of the Irish Times Award and short-listed for the Booker Prize). McGahern’s four volumes of short stories were published in The Collected Stories in 1992. His most recent novel is By the Lake (2002). During his writing career, he has served as a visiting professor at Colgate University and the University of Victoria, British Columbia, and he was writer-in-residence at Trinity College, Dublin, in 1989. He lives with his wife, Madeline Green, in Leitrim, Ireland.

Elizabeth Bowen, The Last September (1929)
The end of British rule in the south of Ireland sets the stage for a young woman’s coming of age in a novel that explores the limited possibilities available to Irish women in the 1920s.

Brian Friel, Dancing at Lughnasa (1990)
In this highly acclaimed play, five Irish sisters search for their individual identities, both within their common bonds and, when necessary, beyond the protective arms of family.

Patrick McCabe, Carn (1997)
This portrait of small-town Irish life, steeped in realistic detail, reveals the struggles of a community impoverished by the closing of the local railroad and one man’s efforts to revitalize the town.

William Shakespeare, King Lear (1605-1606)
Considered by many to be Shakespeare’s greatest tragedy, this play examines themes of filial devotion, madness, and betrayal through the relationship of a king with his daughters.

William Trevor, After Rain (1996)
These twelve short stories by a master of contemporary Irish fiction depict love, betrayal, and forgiveness among families and lovers coping with hidden emotions.
Learn More About Amongst Women
print

Reading in the Dark
Seamus Deane

The Fish Can Sing
Halldor Laxness

The Thing About December
Donal Ryan

The Age of Extremes
Eric Hobsbawm

In the Café of Lost Youth
Patrick Modiano

Heaven and Earth
Paolo Giordano
Back to Top