The Grapes of Wrath Reader’s Guide 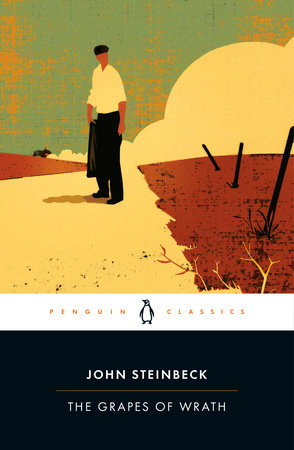 The Grapes of Wrath Reader’s Guide

When John Steinbeck accepted his Nobel Prize for Literature in 1962, he described the writer’s obligation as “dredging up to the light our dark and dangerous dreams for the purpose of improvement.” For some critics, that purpose has obscured Steinbeck’s literary value. He has been characterized variously as an advocate of socialist-style solutions to the depredations of capitalism, a champion of individualism, a dabbler in sociobiology, and a naturalist.

While evidence for different political and philosophical stances may be culled from Steinbeck’s writings, a reader who stops at this point misses some of the most interesting aspects of his work, including his use of paradox. “Men is supposed to think things out,” insists Tom Joad in The Grapes of Wrath. “It ought to have some meaning” (p. 55). But in this epic novel, as well as in Of Mice and Men and The Pearl, Steinbeck seems to question whether the mysteries of human existence can ever be fully explained. In these works that span the grim decade from 1937 to 1947, Steinbeck urges the dispossessed to challenge a system that denies them both sustenance and dignity, and to seek the spiritual belonging that enables individuals to achieve their full humanity. So we have the paradox of the author apparently denouncing injustice while also exalting acceptance of the sorrows visited on humanity, whether those sorrows are wrought by nature or by humans themselves.

All three books examine the morality and necessity of actions the characters choose as they pursue their dreams. The poor fisherman Kino in The Pearl dreams of education for his son and salvation for his people. We first meet him in the dimness before dawn, listening to the sounds of his wife, Juana, at her chores, which merge in his mind with the ancestral Song of the Family. “In this gulf of uncertain light [where] there were more illusions than realities” (p. 19), the pearl that Kino finds lights the way to a more just world and the end of centuries of mistreatment by white colonizers. But the promise of wealth manifests the archetypal evil hidden in the community’s unconscious, like the pearl that had lain hidden in its oyster at the bottom of the sea. As the dream turns dark, Kino descends into violence, bringing death to four men and ultimately to his own son. What other choices might he have made? This parable raises questions about our relationship to nature, the human need for spiritual connection, and the cost of resisting injustice.

Steinbeck’s most controversial work, The Grapes of Wrath, raises similar questions. During the Dust Bowl Era, three generations of the Joad family set out on the road, seeking a decent life in fertile California and joining thousands of others bound by an experience that transforms them from “I” to “we” (p. 152). Cooperation springs up among them spontaneously, in sharp contrast with the ruthlessness of big business and the sad choices made by its victims, for whom “a fella got to eat” (p. 344) is a continual refrain. Casy, the preacher turned strike leader, wonders about the “one big soul ever’body’s a part of” (p. 24).

On their journey to the promised land, the characters in The Grapes of Wrath confront enigmatic natural forces and dehumanizing social institutions. Casy is martyred as he takes a stand for farmers who have lost their land to drought and are brutally exploited as migrant laborers. His disciple Tom Joad, who served time for killing a man in a bar fight, ultimately kills another man he believes responsible for Casy’s death. Tom’s passionate conviction—expressed in his assertion that “wherever they’s a fight so hungry people can eat, I’ll be there” (p. 419)—stirs our sympathy; but his dilemma, like Kino’s, requires us to ask whether taking a human life can ever be justified.

The Grapes of Wrath and The Pearl are also linked by their female characters and the questions they raise about gender roles and family identity. In The Pearl, Juana’s “quality of woman, the reason, the caution, the sense of preservation, could cut through Kino’s manness and save them all” (p. 59). Is this quality most responsible for the return of the pearl to the sea at the end of the novel? Like Juana, Ma Joad is “the citadel of the family” (p. 74). As the remnants of the Joad family seek refuge in a barn at the close of The Grapes of Wrath, Ma’s daughter Rose of Sharon nurses a starving stranger with milk meant for her dead baby. This final scene of female nurturing offers a resolution while also disturbing our long-held ideas about family.

Steinbeck departs from this depiction of women in Of Mice and Men. Confined to her husband’s home, and never given a name in the novel, Curley’s wife functions almost as a force of nature, precipitating the events that wreck the men’s “best laid schemes,” as poet Robert Burns wrote. Whereas the women in The Grapes of Wrath and The Pearl suggest hope even in the bleakest of circumstances, Curley’s wife leaves only shattered dreams in her wake.

Of Mice and Men tells a tightly compressed story set during the Great Depression. George and Lennie, drifters and friends in a landscape of loners, scrape by with odd jobs while dreaming of the time they’ll “live on the fatta the lan'” (p. 101). Lennie has a massive body and limited intelligence, and his unpredictable behavior casts George as his protector. The novel is peopled with outcasts—a black man, a cripple, a lonely woman. The terror of the consequences of infirmity and old age in an unresponsive world is underscored when a laborer’s old dog is shot. Is Lennie’s similar death at the hands of his protector, with his dream before his eyes, preferable to what the future holds for him? Nearly all the characters share in some version of the dream, recited almost ritualistically, and in their narrow world it is pitifully small: “All kin’s a vegetables in the garden, and if we want a little whisky we can sell a few eggs or something, or some milk. We’d jus’ live there. We’d belong there” (p. 54).

The ending appears to be at odds with Steinbeck’s explicit exhortations for social change in the other two novels. In Of Mice and Men, he seems to appeal to a higher form of wisdom in the character of Slim, who does not aspire to anything beyond the sphere he occupies. His “understanding beyond thought” (p. 31) echoes Rose of Sharon’s mysterious smile at the end ofThe Grapes of Wrath.

From the questions his characters pose about what it means to be fully human, Steinbeck may be understood to charge literature with serving not only as a call to action, but as an expression and acceptance of paradox in our world. “There is something untranslatable about a book,” he wrote. “It is itself—one of the very few authentic magics our species has created.”

John Steinbeck’s groundbreaking and often controversial work, with its eye on the common people, earned him both high praise and sharp criticism. In addition to his novels, Steinbeck produced newspaper and travel articles, short stories, plays, and film scripts.

Born in 1902 in Salinas, California, Steinbeck spent much of his life in surrounding Monterey county, the setting for some of his books. His experience as a young man working menial jobs, including as a farm laborer, ranch hand, and factory worker, was transformed into descriptions of the lives of his working-class characters. After attending Stanford University intermittently for six years, Steinbeck traveled by freighter to New York, where he worked briefly as a journalist before returning to California.

His first novel, Cup of Gold, appeared in 1929, but it was Tortilla Flat (1935), his picaresque tale of Monterey’s paisanos, that first brought Steinbeck serious recognition. Of Mice and Men (1937) was also well received. The Grapes of Wrath (1939), a book many claim is his masterpiece, was both critically acclaimed and denounced for its strong language and apparent leftist politics. Always shunning publicity, Steinbeck headed for Mexico in 1940, where he made The Forgotten Village, a documentary film about conditions in rural Mexico. He spent the war years as a correspondent for the New York Herald Tribune, for which he later toured the Soviet Union in 1947; he also wrote the novel The Moon Is Down (1942), about Norwegian resistance to the Nazis.

Steinbeck’s other notable works of fiction include The Pearl (1947), East of Eden (1952), and The Winter of Our Discontent(1961). He also wrote a memoir of a cross-country trip with his poodle, Travels with Charley in Search of America (1962). Steinbeck received the Nobel Prize for Literature in 1962. He died in New York in 1968. His work stands as testament to his commitment to “celebrate man’s proven capacity for greatness of heart and spirit.”

John Dos Passos, Manhattan Transfer (1925)
The alienating effects of capitalism, technology, and urbanization are portrayed in this montage of life in New York City.

Tomás Rivera,… y no se lo trag— la tierra/… (And the Earth Did Not Devour Him) (1971)
A seminal work of Latino literature, these thirteen vignettes embodying the anonymous voice of “the people” depict the exploitation of Mexican American migrant workers.

Émile Zola, Germinal (1885)
The striking miners in this nineteenth-century tale of class struggle are cast as the victims of both an unjust social system and their own human weaknesses.

Ernest Hemingway, The Old Man and the Sea (1952)
Winner of the 1953 Pulitzer Prize for fiction, this novella tells the story of an old fisherman’s endurance as he pursues, captures, and ultimately loses a great marlin.

D. H. Lawrence, “The Rocking-Horse Winner” (in The Woman Who Rode Away and Other Stories) (1928)
This fablelike short story follows a boy to his tragic end as he desperately tries to respond to his family’s obsession with money.

Frank Norris, McTeague (1899)
In this pioneering naturalistic novel set in California, a man of large physical but small intellectual powers pursues a dream beyond menial tasks, but is corrupted by “civilization.”

Leo Tolstoy, “Master and Man” (in Master and Man and Other Stories) (1895)
The relationship between a greedy landowner and his gentle laborer undergoes a dramatic change in this novella when the two are trapped in a snowstorm

Learn More About The Grapes of Wrath
print

Things Fall Apart
Back to Top