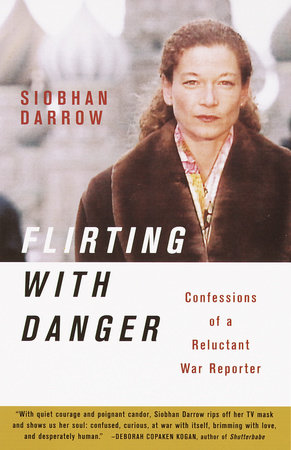 The introduction, discussion questions, suggestions for further reading, and author biography that follow are intended to enhance your reading group’s discussion of Flirting with Danger, a memoir by Siobhan Darrow, a former star correspondent for CNN. Darrow began her career as CNN’s Moscow correspondent during the political and economic turbulence that followed the collapse of the Soviet Union. She recalls in harrowing detail her subsequent assignments as a frontline reporter covering conflicts in Chechnya, Croatia, Northern Ireland, Israel, and Albania. Her tenure as London correspondent for CNN provided her with a front-row seat to every history-making event in the 1990s, from the collapse of the IRA cease-fire in Northern Ireland to the death of Princess Diana and the cloning of Dolly in 1997.

Flirting with Danger is more than just the story of Darrow’s rise to journalistic eminence. With humor and unflinching honesty, Darrow describes her own troubled childhood and complicated family situation. The daughter of an emotionally cool, well-to-do Scotch-Irish mother and an intelligent but troubled father, dominated all his life by his immigrant Jewish mother who steadfastly refused to meet his Protestant wife and children when they settled only miles from her home, Darrow explores the impact of a childhood in which "two alien cultures lived under one roof with no dialogue, just hostility, misunderstanding, and resentment" [p. 14] on her choice of profession. Turning her critical journalistic gaze inward, she examines how her parents’ relationship and her resulting feelings of confusion influenced her own romantic relationships, including a failed marriage and numerous passionate, yet ultimately unfulfilling, love affairs.

Set against the background of the world’s most volatile trouble spots, Flirting with Danger is an engrossing portrait of a woman whose eyewitness reports on war and political turmoil made her a much-admired public figure, and whose confrontations with personal demons finally allowed her to discover the private rewards of a loving husband and home.

1. Darrow spent her childhood and adolescence in a household torn apart by poverty, anger, and bitterness. Were the clashes between her parents inevitable, given their different cultural and religious backgrounds? To what extent was her father’s inability to persuade his mother and sister to accept his Gentile wife and children responsible for the disintegration of his marriage? What responsibility, if any, did Darrow’s mother have in creating the rift between the children and their father?

2. At college, Darrow writes, "I began my infatuation with Russia, the place of my father’s origin. I wanted to know the enemy. I couldn’t know my father; it would have been too much of a betrayal of my mother. So I took a circuitous route to find him, crossing the ocean, the world, and enemy lines, to Russia" [p. 17]. Does the need to understand her father and his origins color her feelings about the Soviet Union and the people she comes in contact with? Does it enhance or diminish her ability to draw an accurate portrait of a society many Americans considered the "evil empire"?

3. How do Darrow’s everyday experiences as a student in Moscow mirror the dualities that defined her life growing up in New Jersey? In what ways is her fascination with Dima [p. 19] similar to her mother’s attraction to her father? In what ways does it reflect emotional qualities Darrow shares with her father?

4. "My marriage felt like a sham. But that was the model that was familiar to me; that was what my parents’ marriage had felt like. It felt uncomfortable, but it was a discomfort to which I was accustomed" [pp. 35-36]. In light of this comment, is Darrow’s willingness to accept the lack of emotional connection in her marriage (as well as the constant physical separation) surprising?

5. What impact did Darrow’s affair with Ted Turner have on the way she perceived herself? Did it change her views on the nature of love and the meaning of intimacy? To what extent was Turner not only a lover, but also a "father figure" who fulfilled her lifelong fantasies of having a strong, caring protector? Darrow’s next lover, Alessio, was almost ten years younger, but she writes, "Of the two of us, in many ways he was the older and wiser"[p. 63]. When she returns to Moscow after the collapse of the Soviet Union, she falls under the spell of the handsome, exciting, and blatantly unfaithful Trevor. How do these relationships illuminate Darrow’s confusion about what she wants from a man and what she thinks she deserves?

6. "Women covering war often feel they have to be braver and tougher than their male competitors, just to prove themselves" [p. 79]. As a reporter, did Darrow face greater challenges than her male colleagues? Did her gender allow her certain advantages as well? How does she protect herself from being overwhelmed by the horrors she sees?

7. In several places, Darrow describes her attraction to war reporting as an addiction. How valid is this assessment? What evidence is there in the book that this is common among war correspondents? Have you read other books or articles that support this view?

8. Television news has often been criticized for numbing viewers to the terrible realities of war and other tragedies. What techniques does Darrow use to convey both the emotional impact and the objective reality of the scenes of devastation she writes about in Flirting with Danger?

9. In recalling her experiences in Chechnya, Darrow says, "I struggled to find the right words to give meaning to what I was seeing. I hoped, mostly in vain, that reporting on this desperate situation would somehow help improve it" [pp. 101-102]. Has Flirting with Danger influenced your thoughts or opinions about current world events? Does it suggest new ways of looking at the Palestinian-Israeli conflict, the war in Afghanistan, the rise of terrorism, and other dangerous situations caused by ethnic or religious differences?

10. How would you describe the tone of Flirting with Danger? In what ways does Darrow’s career as a journalist come through in the way she tells her own story? How does the style of the book differ from other memoirs you have read?

11. Darrow has lived a highly unusual life and faced dangers few people ever encounter, but not all of her experiences are completely unique. To what extent are the issues and concerns Darrow explores common to most women today? Does Flirting with Danger offer insights relevant to your own life?

12. "Sometimes we sleepwalk through events in our lives, only to understand how they fit into our particular cosmic weave much later" [p. 28]. How did the skills and personality traits Darrow developed as a child shape her approach to covering war zones around the world? In what ways did her experiences as a correspondent change her perceptions of her mother and father and help her come to terms with the mistrust and anger that pervaded their home?

Siobhan Darrow was born in Belfast, Northern Ireland, and grew up in New Jersey. She joined CNN in 1986, and worked as the producer for CNN’s World Report and The International Hour. From 1991 to 1995, she was CNN’s Moscow correspondent and was nominated for an Emmy Award for reports she filed from Chechnya in 1994. As well as covering breaking events, she presented a number of in-depth stories on social change in the former Soviet Union, including a series on Russian women and on life in the Central Asian Republics. She spent three years in CNN’s London bureau and is now living with her husband in California and working on a second book.
Learn More About Flirting with Danger
print

The Man Who Went to War
Patrick Graham

My Rival, The Sky
Margo Kurtz

Dispatches from the Dark Side
Gareth Peirce

Where is the Justice?
Hiromasa Ezoe

The Idea of Canada
David Johnston

The Business of Books
Andre Schiffrin

The Code of Love
Andro Linklater