House of Many Gods Reader’s Guide 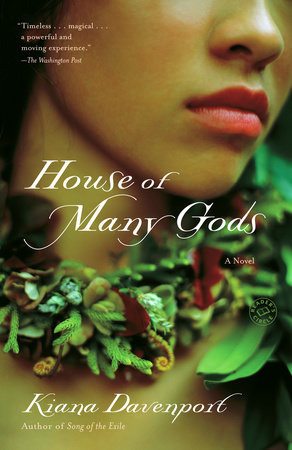 House of Many Gods Reader’s Guide

1. Discuss Ms. Davenport’s decision to open her novel with the story of Ana’s motherless childhood on the Wai‘anae Coast? What do the opening pages suggest about a mother’s role in shaping her child’s character? How does Ana’s extended family compensate for her mother’s absence? How do the themes of motherhood and family develop and shift throughout the novel?

2. The island of O‘ahu is introduced in as much detail as any character in the opening chapter. What are your initial impressions of the island: what does it provide, and what does it deny? How are they redeﬁned by the close of the novel? How has the landscape colored and shaped the lives of Ana and her extended family? What is the tone of the narration when characterizing O‘ahu? Does it darken or lighten in subsequent chapters?

3. Discuss Ms. Davenport’s handling of time. When does she stick to straight chronology, and when does she punctuate the novel’s present with past moments and memories? Comment on simultaneity vis-à-vis the lives of Ana and Nikolai, whose paths don’t cross until their adulthood. What sort of events does Ms. Davenport choose to slow down and magnify, which does she compress in her tale of four decades? Does time seem like another trap for her characters, or something capable of being transcended?

4. Contrast the introduction of Nikolai with that of Ana. Does the sort of tragic fairy-tale tone apply to each? What sort of emphasis falls on family and place in Nikolai’s early years? How does the absence of a father compare to Ana’s absent mother? If young Nikolai ﬁnds “salvation” in lies, where does young Ana ﬁnd hers?

5. The subject of spirituality threads itself throughout the novel, from Bible-quoting Aunty Pua and Tommy Two-Gods to disused churches in the former Soviet Union. Monotheism is juxtaposed with polytheism. Discuss the role of religion in these characters’ lives. Is so-called organized religion presented as an adequate avenue for one’s spiritual inclinations? How many meanings do you read in the novel’s title?

6. The novel dramatizes Hawai‘i’s conﬂicted if not hostile relationship with the U.S. mainland. How is the state-country relationship presented? What myths or preconceptions does the novel debunk–or perpetuate? What issues does it introduce or shed new light on? What is the place of Hawai‘i in the collective character of the United States? What is unique about the islands?

7. Particular emphasis is placed on injustices perpetrated by the U.S. military. How do the decades of reckless weapons testing take on an ironic if not sinister meaning in light of the way Hawai‘i’s veterans of major U.S. wars are depicted?

8. The causes and consequences of environmental degradation are played out on a global scale in this novel. Do you see Ms. Davenport’s handling of the motif turning polemical, or does she manage to keep the subject rooted in the lives of her characters? To what degree does Nikolai’s ambitious ﬁlm on the environment resemble House of Many Gods? What is the place of politics in the novel, the novel in politics?

9. Varieties of expression appear throughout the novel: spoken language, letters, silence, work, violence, dance, sex, ﬁlm, and sign language– to name a few. What does Ms. Davenport reveal about how expression shapes identity? What are the limits and possibilities of each medium? How does the novel wrestle with the truly ineffable?

10. Rosie, Ana’s cousin, introduces a key theme early in the novel. “Everybody wants forgiveness,” she tells Ana. “A chance to wipe the slate clean.” How does that idea reverberate throughout the novel? What prevents or makes possible forgiveness in the lives of these characters? Is anything depicted as genuinely unforgivable?

11. Though Russia and Hawai‘i seem like incongruous settings for a novel, Ms. Davenport draws out a number of common denominators between the places. What are they? How do the geography, politics, religions, and collective character of one overlap with the other? How do the similarities and differences of each place frustrate or facilitate Ana and Nikolai’s relationship?

12. The novel is peopled with a vivid, eclectic group of secondary characters who stand on their own as well as enrich our understanding of Ana; chief among them are Rosie and Lopaka. Discuss each cousin’s relationship with Ana. What is consistent throughout their years together? What changes? To what extent is Ana’s understanding of herself indebted to each cousin?

13. Death and illness cast a long shadow over the novel, yet in the end it seems that light trumps dark, life trumps death. Do you agree? How does Ms. Davenport dramatize the contest before presenting her victor?

14. Ms. Davenport mentioned that twenty-plus drafts of the novel’s conclusion preceded the one you just read. “I realized that this couple, Ana and Nikolai, had suffered enough,” she said in an interview. “Both orphans in a way, they had overcome amazing odds, they had achieved important things. I felt that these two people, whom I loved, had earned their right to be happy. I ﬁnally realized that the bleak, logical ending would have been entirely false.” Do you agree?

15. After completing her previous novel, Song of the Exile, Ms. Davenport mentioned that a quotation from novelist John Gardner expressed her goal as a novelist: “To write with taste, in the highest sense, is to write with the assumption that one out of a hundred people who read one’s work may be dying, or have some loved one dying; to write so that no one commits suicide, no one despairs; to write, as Shakespeare wrote, so that people understand, sympathize, see the universality of pain, and feel strengthened, if not directly encouraged to live on.” Said Ms. Davenport, “That’s the level of writing I want to achieve, one book at a time.” How does House of Many Gods meet–or fall short–of this ideal?

Learn More About House of Many Gods
print

The Woman Next Door
Yewande Omotoso

Keeper’n Me
Richard Wagamese
Back to Top