Song of the Exile Reader’s Guide 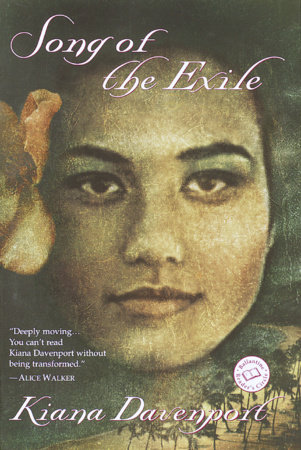 Song of the Exile Reader’s Guide

“An overwhelming experience–.Davenport’s prose is sharp and shining as a sword, yet her sense of poetry and love of nature permeate each line–.haunting.”
—Isabel Allende

“Passionate–Song of the Exile transports the reader into an often-magical world by the power of its story. Its language is at times a song, and sometimes a cry in the dark–.Davenport’s imagination and vision will haunt you for a long time.”
—Chicago Tribune

“Lyrical–The success of Song of the Exile lies in Davenport’s commitment to telling a story that has been shamefully silenced.”
—San Francisco Chronicle

“Captivating–[A] rich tapestry of myth and history, of the political and domestic sphere, of brutal desire and rare moments of exquisite joy, the final song played is, if not entirely triumphant, then at last and completely transcendent.”–Elizabeth Haas, bn.com

“Song of the Exile is written to be a popular novel, which is to say it ahs a story that sweeps across three continents and is fired by a flaming romance. What separates it from its genre, however, is its intensity of feeling, its body of sensuous detail present on every one of its pages, and its dedication to a level of writing very few bestsellers possess.”
–Norman Mailer

“Nuanced and haunting, Song of the Exile reveals the emotional truths hidden beneath the World War II euphemism ‘comfort women.’ A half century late, this important and powerful novel gives these women a way out of the perpetual exile of the forgotten.”
–Gloria Steinem

1. Keo’s jazz mentor emphasizes the importance of knowing a tradition before experimenting with it. To what traditions is Song of the Exile indebted? How does Kiana Davenport borrow and blend various narrative traditions–Greek mythology, Hawaiian folklore, and chronicles of war–to create her own?

2. Discuss how the structure of the novel mirrors the workings of memory. What does the novel show us about the past’s place in the present?

3. A number of landscapes are traversed throughout the course of the novel’s action; some seem to exert a greater influence on character that others. What do we learn about the extent to which place shapes character? And how can character shape place? Also, how does the novel challenge or uphold traditional notions of home?

4. Much of Song of the Exile chronicles characters’ attempts to bring their interior lives into some sort of harmony with the exterior world, the world of others. What sort of obstacles most often appear between the two? Which prove the most formidable, and why? What resources do Keo, Sunny, or Malia find or find lacking when confronted with trial?

5. What was your understanding of the term “comfort women” before reading this novel? From where did you derive your knowledge? What notions were undermined or supported? To what extent can a work of fiction color one’s consciousness or effect social change, however modestly?

6. Kiana Davenport has spoken of the importance of resisting the temptation to depict the Japanese lieutenants as utter villains, noting the inherent humanity each of us possesses–however damaged it may be. Does she succeed in avoiding caricatures of evil? What light does Song of the Exile shed on the nature of cruelty and violence, particularly during wartime?

7. The novel is replete with exiles. What are the various songs of each one, and what is the significance of singing or at least making the attempt? What are the perils of silence?

8. Threats to freedom appear throughout the novel, some more conspicuous than others. Provide examples of the way notions of freedom differ from character to character. What restraints are imposed internally, and externally? How? Which prove most difficult to break?

9. Follow the shifting role of music in Keo’s life, and explain the ways in which it opens up or limits his character. How does his means of expression compare to Malia’s or Sunny’s? What might Davenport be proffering about the role of creative self-expression in one’s life? Or the extent to which one person can comprehend another?

10. How pointed are the politics in Song of the Exile? Do you see this as a novel with an agenda/ If yes, what? Does a novelist have a responsibility to engage the politics of the time he or she chronicles? Why?

11. Hawaii itself emerges as a character in the novel. What sort of transformation does it undergo? How does its evolution compare to that of the central character? What forces are at work on each? Which are unique to place?

12. Kiana Davenport has said that the writers she admires most get at the truly difficult themes through the subject of family. What is the role of family in Song to the Exile? How do abstractions such as freedom, happiness, and meaning find expression in the author’s handling of family?

13. What is the dominant tone of the novel?

14. Samuel Johnson famously remarked that “the only end of writing is to enable the reader better to enjoy life or better to endure it.” How does Song of the Exile measure up to his criteria?

Of Native Hawaiian and Anglo-American descent, KIANA DAVENPORT was raised and educated in Hawaii. She is the author for four previous novels, including the internationally acclaimed Shark Dialogues, a multi-generational saga set in Hawaii from the nineteenth century to the present. Her short stories have been included in the Pushcart Prize collection in 1998, and the O. Henry Awards Anthologies in 1997, 1998, and 2000. Recipient of a fiction grant from the National Endowment for the Arts, she was also a 1992-93 Bunting Fellow at Harvard-Radcliffe, and the 1997-98 Visiting Writer at Wesleyan University. Davenport has traveled extensively throughout the Pacific and Asia researching her novels and short stories. Song of the Exile, based mostly on fact, took five years of research. Her travels were a very personal journey as well as fodder for her writing: “As I traveled throughout the Pacific and the Pacific Rim, interviewing World War II survivors, I began to understand what my father had experienced fighting at Midway and Guadacanal. I also saw how war damages humans irreparably. During interviews, men and women broke down and sobbed even after fifty years.”
Learn More About Song of the Exile
print

Bitter in the Mouth
Monique Truong

Betty
Tiffany McDaniel
Back to Top