That Summer in Sicily Reader’s Guide 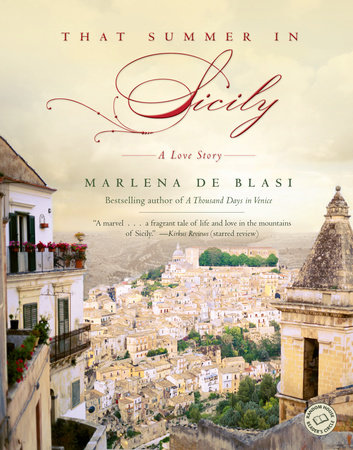 That Summer in Sicily Reader’s Guide

1. 1. What were your first impressions of Villa Donnafugata? What kind of place did you think it was–a monastery, a cooking school, an eccentric restaurant, a retreat house, a commune? How did your opinion of the villa’s state and its bustling activity change throughout the story?

2. Leo’s favorite myth was that of Demeter, goddess of agriculture and motherhood. How does his love of this myth and of the goddess herself reflect his love for Tosca?

3. In the introduction, Marlena de Blasi writes that “Silence is the admission of mystery” (page xxv). In what ways is this idea repeated throughout Tosca’s story? Do you see this at work in your own world?

4. Have you ever visited Sicily? If you have, did you find de Blasi’s descriptions matched your memories and experiences? If not, has reading this book inspired you to travel there?

5. How do you account for the de Blasis being so welcomed by some and so rejected by others at the start of their southern Italy escapade?

6. Carlotta describes her tribe to de Blasi by saying they are “people who need other people. We are all related by affection. We are part of one another’s history. We are Sicilian” (page 15). Do you have similar feelings for your own community? How do you define community, and what influences help keep that community together?

7. Carlotta also describes the importance of mealtimes at Donnafugata, saying: “The work is only an intermezzo, un divertimento, to fill the scant hours between meals” (page 15). Where does mealtime fit into your daily schedule? How do you balance the joys of preparing and eating food with the requirements of your day? 8. If you were to live in a commune like Villa Donnafugata, what kind of job do you think you would most prefer or would be best suited for?

9. One of the residents of Donnafugata states, “Our children don’t know us as we are now. Less do they know us as we were. Oh how I wish they could have known us as we were. Do you think they would recognize their young selves in our young selves?” (page 34). How would you answer her question if applied to your own parents? And if you have children, how do you think they would respond?

10. Cossetina dies as Viola gives birth (to a daughter she names Cossetina). Have you experienced the close proximity of a death and a birth? How was this perceived among your family and friends?

11. Don Cosimo says, “Sometimes an ‘unlived’ love can be the best kind of love. One has only to put a face to love to be happy in it” (page 49). What does this phrase mean to you? Have you ever experienced what Don Cosimo experiences for Tosca, loving someone from a distance–even if they are close friends?

12. Tosca asks Marlena, “What do you suppose has changed in twenty-five years or so? . . . Even if its theater and its motives are being played out in a different geography, there’s still war, isn’t there? Still avidity and hate and violence and fear. Poverty and righteousness are still thriving. As are revolution and arrogance and lies . . . I must tell myself yet again that one need tune in only once in a lifetime to the nightly news to know the chronic story of man” (pages 53—54). In what ways do you agree with la signora? In what ways do your thoughts on current events and on staying informed conflict with hers? How do you think her philosophy was shaped by her experience living in a palace during World War II?

13. How did you reconcile that the horrors of the war did not penetrate Tosca, as opposed to the horrors she witnessed at the hands of the Mafia?

14. Tosca asked Leo to allow her to live in the borghetto, because she felt a need to be among people of her own station. Have you ever given up pleasures and comforts for the sake of friends or family? How did you feel about making that sacrifice?

15. After her mother’s passing, Tosca adopted the role of being her father’s caregiver, a role she had to stop because she wanted to be herself; she did not want to be her mother. Have you ever had to end or change the parameters of a relationship because the role you were filling was meant for another, not for you?

16. Tosca’s circumstances–her mother’s death, her father’s coldness, her family’s poverty–matured her in remarkable ways that impressed Leo considerably. What circumstances in your own life have been most significant in shaping your character? Are there qualities about you that others can’t help but comment on, as Leo comments on Tosca’s strength and boldness?

17. Why do you think Mafalda felt it was more important to find their father instead of communing with Tosca, when Tosca had been so much kinder to her than their father?

18. Mafalda tells Tosca, “I think you could upset . . . the delicious balance of this new life of mine. I can’t let you in. I won’t take the risk. I am not punishing you for your earlier decisions, but neither can I disregard the consequences of those decisions” (page 227). In what ways does she sound like Tosca? Have you ever shared Mafalda’s feelings, having to refrain from inviting someone into your life for fear they would disrupt your own sense of balance?

19. What do you think Tosca was doing in the time she spent in Palermo, sitting at cafés, wandering the streets, observing the people living their daily lives? What, if anything, do you think she learned in that time, and how do you think it informed her next set of decisions regarding the Maqueda ladies?

20. What does Mattia’s arrangement with Don Cosimo reveal about the true nature of Sicilian loyalty and dignity?

Learn More About That Summer in Sicily
print

Rose: My Life in Service to Lady Astor
Rosina Harrison

What She Ate
Laura Shapiro

My Life in France
Alex Prud’homme and Julia Child

Comfort Me with Apples
Ruth Reichl

Tender at the Bone
Ruth Reichl

The Girls from Ames
Jeffrey Zaslow

Paris to the Moon
Adam Gopnik

Climbing the Mango Trees
Madhur Jaffrey
Back to Top