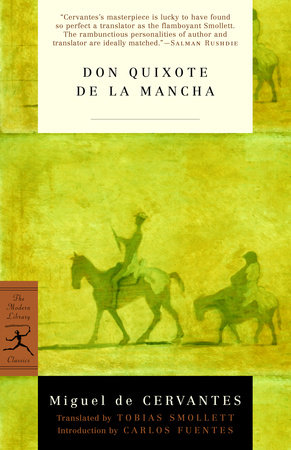 1. Don Quixote is often called the first modern novel. Do you agree? Why or why not?

2. Many critics have interpreted Don Quixote as a sustained exploration of madness. How is madness represented in the novel?

3. Italian literary critic Giovanni Papini famously argued in the early 1920s that "by virtue of [the power of Cervantes’s genius] the shade of Don Quixote has succeeded in deceiving us. We have been led to think that his life was full of deception in the sense that he was himself deceived by carnivorous men, decadent times, and impossible books. His life was indeed full of deception, but he was himself the deceiver, and we of the succeeding generations have been the ones deceived." Papini suggests that generations of critics have idolized Quixote, held him up as a "martyr of pure, militant, and derided Christianity," when in fact the character is vain and proud, thinks only of earthly glory, and aspires to material conquests. He was not, Papini claims, mad at all, but merely pretended to be. What is your opinion of this argument?

4. Critics have debated the question of whether Cervantes’s intention in Don Quixote was to ridicule the chivalric romances-which typically featured knights accomplishing the most impossible things-that were so popular in the Middle Ages. Northrop Frye, for instance, writes that "with every beating he gets, [Don Quixote’s] dignity grows on us, and we realize how genuinely faithful he is to the code of chivalry. He is courteous, gentle, chaste, generous (except that he has no money), intelligent and cultured within the limits of his obsession, and, of course, courageous. Not only was the code of chivalry a real code that helped to hold a real civilization together, but these are real virtues, and would be if chivalry had never existed." Do you think the book repudiates chivalry?

5. In his 1935 book Don Quixote: An Introduction to Psychology, leading Spanish literary expert Salvador de Madariaga refers to what he calls the "sanchification" of Don Quixote and the "quixotification" of Sancho. How does each character affect the other?

6. Lionel Trilling once claimed that "All prose fiction is a variation of the theme of Don Quixote: . . . the problem of appearance and reality." Discuss.

7. The names of the main characters in the novel are not stable: for example, Don Quixote is variously called Quixada, Quesana, Quixana, Quixote, Jigote, Knight of the Mournful Countenance, and Knight of the Lions; Sancho’s wife is known as Juana Guti?rrez, Mari Guti?rrez, Teresa Cascajo, Teresa Panza or Teresa Sancho, Teresaina, and Teresona. What is the significance of the change of name and why are the characters so concerned with coming up with etymologies (most of which are wrong) for explaining how another character has come to have a particular name?

8. Many readers have been disturbed by the fact that Don Quixote recovers his sanity before dying, instead of venturing forth again, as Sancho would have him do. How do you feel about his regaining his sanity? What do you think is the significance of it?

The Annals of Imperial Rome
Tacitus

The Odyssey of Homer
Homer

The Saga of the Volsungs
Jesse L. Byock and Anonymous

Tales from the Thousand and One Nights
Anonymous

The Rise of the Roman Empire
Polybius

The Complete Plays of Sophocles
Sophocles

Tales from the Decameron
Giovanni Boccaccio

The Arabian Nights, Volume I
Anonymous

The Small House at Allington
Anthony Trollope
Back to Top