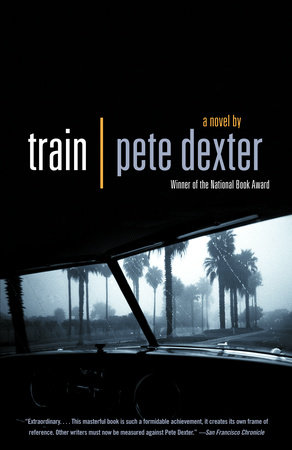 “Extraordinary. . . . This masterful book is such a formidable achievement, it creates its own frame of reference. Other writers must now be measured against Pete Dexter.” —San Francisco Chronicle

The introduction, discussion questions, suggested reading list, and author biography that follow are intended to enhance your group’s discussion about Pete Dexter’s Train. We hope they will provide useful ways of thinking and talking about this gripping, provocative new novel from the author of the National Book Award–winning Paris Trout.

In Los Angeles, 1953, Brookside is the most luxurious golf course in town. The grass is green, the golfers are white, and the caddies are black. Lionel Walk—called Train—is a seventeen-year-old caddie who has an extraordinary talent for the game. His mother has a new lover who beats Train’s beloved dog as a way of trying to get Train to move out of the house. Train struggles to make a living, and tries to stay on the good side of Sweet, who assigns caddies their “totes” for the day. But when Sweet is implicated in a brutal crime that brings police investigators to Brookside, Train and the rest of the caddies are fired. Homeless and out of work, Train takes up with Plural Lincoln, a sweet-natured ex-boxer, and soon finds work at the dusty golf course attached to an ill-fated housing development. Miller Packard, a rich gambler and police sergeant with a taste for danger, soon begins to bet on Train, traveling with him to matches against golf hustlers across America. Packard invites Train and Plural to live in his guest cottage, but his wife Norah is uneasy with this situation, having been raped by Sweet and Arthur, who worked at Brookside and murdered her first husband in a botched robbery on their yacht. Now enmeshed with the fragile Norah and the reckless Packard, Train and Plural find trouble close at hand.

With his trademark economy of style, Dexter brings these characters to life in their most vulnerable moments, stripping away words and manners until all that is left is the basic human pulse.

1. The narrator tells us that even before Miller Packard spent five days in the ocean after the sinking of the U.S.S. Indianapolis, “he’d deliberately and often put himself in places where he saw awful things happen not only to people who deserved it but also to people who just seemed to stumble in at the wrong time” [p. 1]. Packard has a taste for provoking violence even before the nightmare of sharks in the Pacific, even before his leg is nearly destroyed in an attack by a dog [pp. 7–8]. Why is he addicted to violence, and how does the reader respond to this aspect of his
character?

2. While Packard’s habit of seeing himself “from a distance” [p. 3] suggests that he experiences what psychologists call dissociation, Train experiences something similar when he kills Mayflower with the leg of a chair: “It was still in his hand when [his mother] come back to the house and saw him in the kitchen, and saw what he’d done” [p. 91]. Train is consistently shown to be a character with a gentle and cautious nature; what makes him lose control and kill Mayflower? Does Dexter suggest that his characters are at the mercy of events that are simply unbearable?

3. Consider the way Dexter presents the characters’ thoughts or self-expression. Train and Plural have much greater interiority than Packard and Norah. Their emotional lives are not only more fully imagined but also more accessible through the narrative point of view. Why has Dexter delivered his characters in this way; why do the black characters evoke more sympathy than the white ones?

4. “From his earliest memory,” Packard’d “had a facility to see himself from a distance. Sometimes when he thought about it, it seemed like he’d been someplace else, watching himself, for most of his life” [p. 3]. Train calls Packard the “Mile Away Man.” How does this aspect of Packard’s character affect his relationship with Train? With Norah? Is he a man who wants to connect, but can’t?

5. Why does Packard give Train the money that is supposedly for Florida’s widow? Why does he make a bet with the fat man that “Mr. Walk here does the right thing” [p. 29]? By giving the money to Sweet, does Train show that he’s too innocent for the world he finds himself in?

6. What are the main events in the novel’s plot, and is there a clear climax? What kinds of episodes create suspense? Weigh the exploration of character against the narrative passages. Which is more predominant? Does one element seem more important in the novel than the other?

7. All four of the main characters in the novel—Packard, Norah, Train, and Plural—are capable of unpredictable outbursts of violence. What is Dexter suggesting about the nature of violent action—what provokes it, how is it controlled, and when do internal controls break down?

8. Why does Packard befriend Train? Does he do so out of generosity and interest, or with a view to making money from Train’s talent? Considering that Packard takes most of the money that they win, is he simply exploiting Train?

9. A major part of Train is about the love between Norah and Packard. The novel opens with the words, “At this point in the story, Packard had never fallen in love, and didn’t trust what he’d heard of the lingo. . . . It sounded out of control to him, and messy” [p. 1]. What draws them to love each other, and what drives them apart, finally?

10. How is Norah like the women in the crime fiction of writers like Dashiell Hammett and Raymond Chandler, and how is she different? Early on, she is presented as a woman who relies on men: “One way or another, men had been trying to protect her or save her all her life. She brought that out in them, even after she had stopped trying” [p. 56]. Does she change throughout the course of the story? How does her final act in the novel relate to this statement?

11. Dexter has chosen Los Angeles, circa 1953, as the setting for his novel. What details make the setting come alive? How does the background of racial tension make itself felt in the setting?

12. The wife of the owner of Paradise Developments, susan “no capital S” [p. 108], puts together an exhibit of images of black men she calls “Images from the Working Life” [p. 116] which includes pictures of two men hacking each other to death. How does her sexual exploitation of Train and other black men contribute to the story’s insistence on a clear-eyed view of racism? How does her sexual predation relate to Arthur and Sweet’s rape of Norah?

13. Plural is perhaps the most surprising character in the story. What elements contribute to Plural’s charm and strangeness? Is he, too, in certain scenes, a frighteningly unpredictable person? Is he, at least at times, insane?

14. Given the breakdown of the relationship between Packard and Norah after Norah becomes pregnant, has Dexter created a situation in which the reader expects a disastrous ending? If so, what elements have gone into making the final scene one that is—however shocking—not unexpected? Is it clear what happens to Packard at the end?

15. Plural says to Train, “The world is a hungry place, man. . . . And whatever kind of thing you is, there’s something out there that likes to eat it. It’s natural. That’s how the world keeps tidy” [p. 240]. Might this statement be considered a summary of the novel’s pessimistic worldview? And if so, is there any hope for survival?

16. Dexter has been highly praised as a prose stylist; he is also skilled at giving his characters unique voices. Choose a few passages that exhibit the virtuosity of his writing and discuss what makes them stand out.

17. What genre of fiction does this book inhabit? Is it classifiable as a crime novel in the noir style, as a novel about race and racism, or as a psychological thriller, or is it something unique?

Pete Dexter is the author of the National Book Award winner Paris Trout and of God’s Pocket, Deadwood, Brotherly Love, and The Paperboy. He was born in Michigan and raised in Georgia, Illinois, and eastern South Dakota. He lives on Puget Sound, Washington.